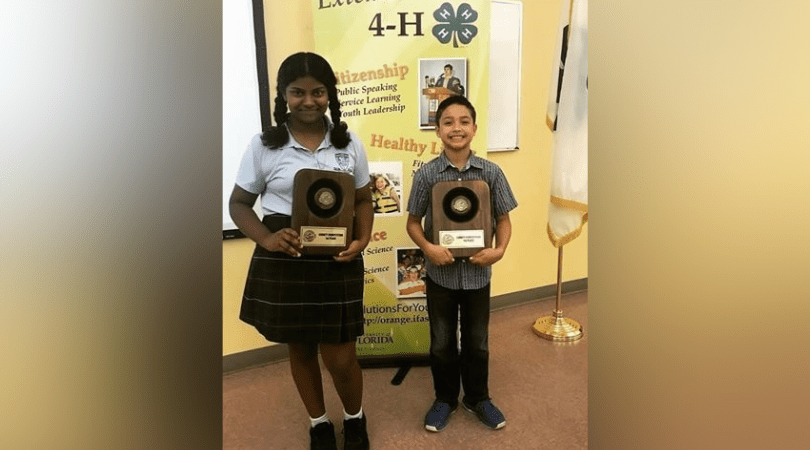 ORLANDO | Two students at Good Shepherd Catholic School, Elias A. and Rachael S., took first place in their respective age groups at the Orange County Tropicana Speech Contest. The Tropicana Public Speaking program takes students through 5 lessons to prepare and deliver a quality speech. Students choose their own topic, conduct research, write and practice their speeches and then compete in their classrooms, schools, and finally at the county level.

Rachael received first place in the middle school group. She says her speech, titled “Being Late,” was about the feeling you have when you walk into class after the bell rings. Rachael says she wants to be a lawyer when she grows up.

Fifth grader Elias took home first place for the elementary group. His speech was titled “Insects,” and he says he chose the topic because he wanted something that would set him apart from others. “I know a lot of people don’t like insects, so I wanted to make it a persuasive paragraph about that.” Elias says his favorite part about the competition was rehearsing with his friends and seeing their support during the competition. “The research was not as hard as I thought it would be. The hardest part was just getting up there and actually doing the speech in front of everyone.”

He notes that his faith helps him persevere his academic pursuits: “[My faith] encourages me to do my best and keep going with projects.” Elias describes the excitement of winning the competition as a very memorable experience: “When they said I got first place, I ran up there and looked at the crowd and my friends were jumping out of their chairs screaming and pumping their fists and it was awesome.” Elias wants to be an actor or a game developer when he grows up.

Elias’s mom, Marlene, says both she and her husband are extremely proud of his achievements. “He was super nervous to go up there, but he just has a really great natural ability and we are just so proud of him.” She says it was a great moment to see her son flourish. “It was really great to see his friends cheering him on. It’s an amazing atmosphere at Good Shepherd.”