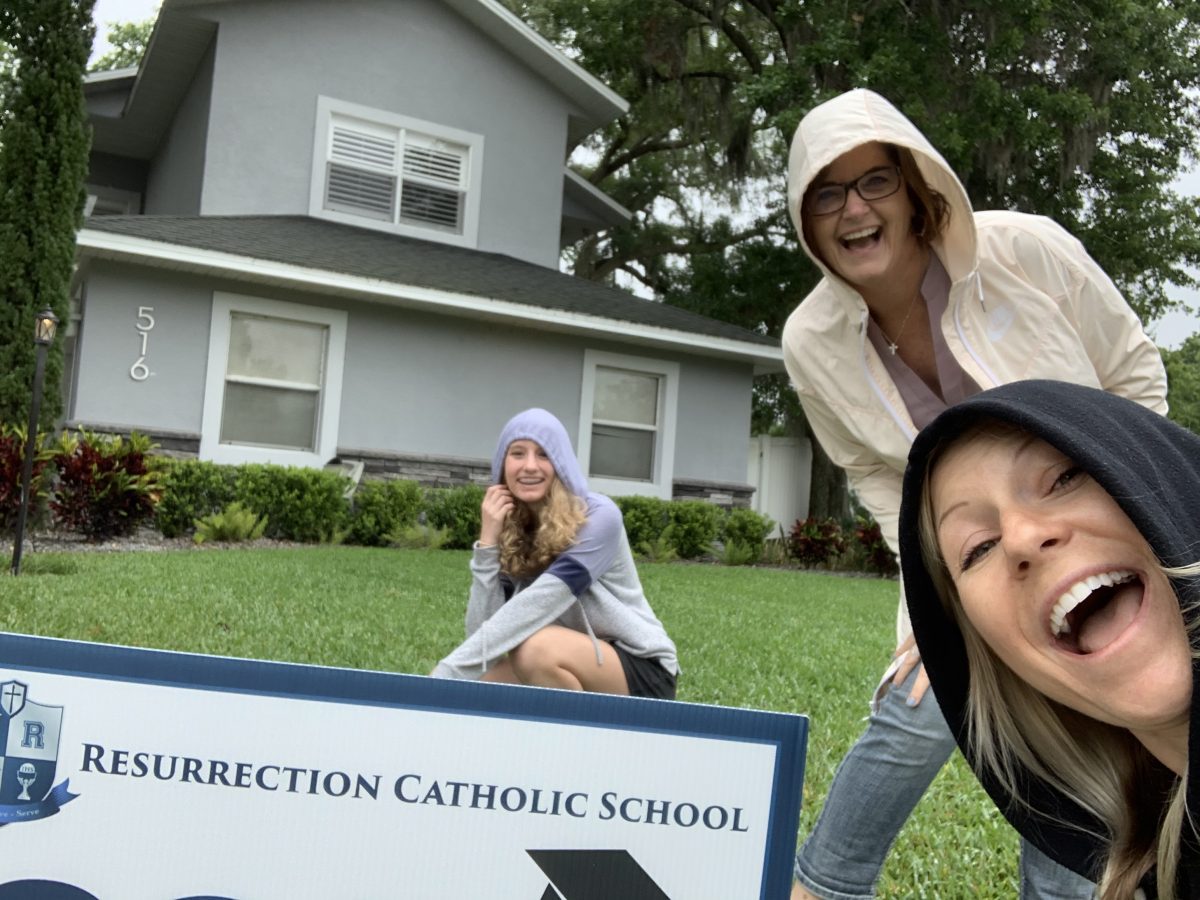 LAKELAND | They were supposed to be at Universal Studios on their eighth grade field trip. Instead, 53 students about to graduate from Resurrection Catholic School in Lakeland took the gloomy, rainy day as a sign of how their final year at Resurrection would end. Little did they know that their principal, Deborah Schwope, was on a mission to change all that.

“Funny story. I was actually texting my friends about it,” recalled Audrey. A friend texted, “Did you get your gowns yet? I said, ‘No’, then, as if on cue, a car pulls up to my driveway and my vice principal (Lisa Schaal) and guidance counselor (Courtney Franzino) step out.” The two women were one of four teams sent out to deliver graduation signs and caps and gown that day.

“I’m freaking out,” said Audrey. “I go downstairs and wait by the door, since I didn’t want to step out immediately, acting like a crazy person.” She recalls they rang the doorbell. She waited five seconds and opened it. “They were already half way down the driveway.” She added, “They were overjoyed to see me and that made me really happy. It made the day a little better.” Audrey said her mom “teared up” when she saw the sign that stated, “2020 graduate. Congratulations!”

After taking a photo with staff, Audrey put on her cap and gown. Her mother was on the phone, working, but “when she saw me, her face…” Audrey had to pause. “Emotional,” she said. Audrey expected a package in the mail. To receive it in person turned a rough day into a memorable one.

“As a parent, I’m disappointed for her more than anything else,” explained her mother, Andrea. “It’s an experience you never really get back. I’m grateful that it wasn’t high school, but there were still a lot of things she was looking forward to. Missing the eighth grade field trip was a pretty big deal for them.”

That is only one of the many traditions in which graduates of Resurrection participate. There is the banquet, the parties, the Mass where 8th-graders pass a candle to the upcoming class as a sign of passing on their leadership role – a tradition many schools adopted after Resurrection inaugurated it more than 20 years ago. And of course, there is the “Grand Goodbye”. Audrey described it: “It’s the last day the 8th-graders are there. They parade around the school and at the very end, they are in the carline parking lot. All the students in the entire school are there, throwing candy, spraying silly string and holding up signs they made for their friends. Sometimes parents are there holding up cardboard cut-outs of the students for support. That’s the chance for the 8th-graders to see the school for the last time.”

For the many students who began their academic careers in Resurrection’s Pre-K, missing the final farewell after 10 years of formation, love and guidance is hard to take. “It really hit me,” Audrey said. “With this quarantine, I never really got a chance to say goodbye to the school. When I got the gown, I realized we probably weren’t going to have a graduation ceremony and I doubt we’re going to be able to go to the school for one last hoorah,” said Audrey. She began at Resurrection in Pre-K4. “This time is just a big thing of mixed emotions,” she acknowledged.

“It’s a sad thing for them because they’re kind of finding out who they’re going to be and it’s just part of growing and living and parting,” explained Andrea. “The whole idea of parting and saying goodbye – it’s a weird way of learning how to do it. With graduation, there are a lot of events that are forged to help them process the goodbye and share their thoughts… opportunities to sign yearbooks and interact with each other. They’re not really getting that.” She hopes they will have a last event in June or July. Plans are in the works and pending approval while the pandemic continues to unfold and change scenarios on a daily basis.

At most Catholic schools, because families have been together for so long, the relationship between parents, students and staff is more like a family. Andrea says that helps, and she knows she and Audrey will see most of them again. Many students are going on to Santa Fe Catholic High School in Lakeland. “Hopefully she will see them again in the fall, God permitting, when the world opens up – hopefully – and she will be a normal freshman in a normal situation,” Andrea noted.

Meanwhile, Schwope said recognizing her seniors was important. “It was a wonderful opportunity to let them know we loved them and we cared,” she said. “This is so hard for our students and all of our teachers. We just want them to know that we are thinking of them and we miss them as much as they miss us.”

By Glenda Meekins of the Florida Catholic April 28, 2020