It is now two years since the enormous earthquake shook Port-au-Prince and the surrounding areas. The scenes of death and destruction dominated TV news for weeks, and though the cameras have gone, the recovery continues. 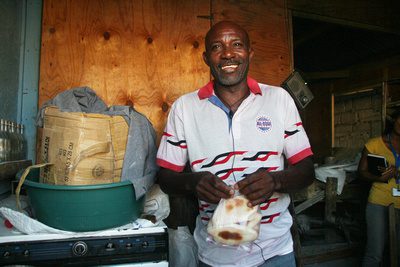 By Ken Hackett and Carolyn Woo

It is now two years since the enormous earthquake shook Port-au-Prince and the surrounding areas. The scenes of death and destruction dominated TV news for weeks, and though the cameras have gone, the recovery continues.

We recently had the opportunity to see firsthand, real progress in this recovery during a brief visit to Port-au-Prince. We were impressed by what has been accomplished, but equally struck by the amount still to do.

But what pleased us most was to witness, in action, the strategy of Haitian empowerment that was adopted by Catholic Relief Services and many of our partners as the heart of this recovery.

From the outset, it was not about how many homes could be reconstructed, or water and sanitation systems rebuilt, or people fed. To get this recovery right for Haiti, it had to be about how ordinary Haitians who had lost so much, could lead their own reconstruction in ways that are dignified and sustainable.

Yes, we saw row after row of newly completed homes, over 10,000 of them. That was impressive. But what we heard more about was how neighbors helped neighbors to build them. How Mrs. Pierre George was assisted by young men and women from her Delmas 62 neighborhood who hardly gave her the time of day before the earthquake. They helped her clear her plot, lift the rubble out of the way, and with the watchful assistance of CRS’ masons and carpenters, build her house.

It was through this approach of empowering communities to help themselves that we witnessed the most powerful results. Take for example the people of Solino, a neighborhood of Port-au-Prince. This wasn’t an area that CRS had experience working in. But thanks to the persistence of a few of the residents, we looked at how we could best assist them. One of the challenges for this community was the drainage canals that backed up with debris and garbage from many parts of the city. When it rained Solino flooded and on top of the hundreds of damaged homes, the Solino folks suffered a soaking mess of garbage and filth.

CRS’ first approach was to employ dozen of Solino’s underemployed men and women to clean the drainage canals. Happy to have made this improvement, these same folks asked if we could help then reconstruct damaged homes. Unemployment and underemployment was endemic in this part of the city, but once the people of Solino started to mobilize themselves, there was no stopping them: Improved sanitation, flood drainage improvements, homes rebuilt and businesses started with small investments that made a powerful difference.

Examples of this difference abound. Leopold Louis Guimard lost his house and his home-based bakery in the earthquake and spent months living with virtually nothing. Together, with his community and Leopold himself, CRS built a transitional shelter, which today doubles as his bakery. CRS also equipped him with a $500 small business grant that Leopold used to buy an industrial-sized sifter and enough 100-pound bags of flour to get his gas oven going again. Today, he is back in business and even has five employees.

Key to helping Haitians get back on their feet is job creation, and CRS is providing loans, grants and business training to hundreds of entrepreneurs like Leopold so they can restart their businesses. The program also helped Inola, a Haitian woman who now supports her family with the sales of the peanut butter she makes, and Ulysee, whose leather crafts business is so busy he has taken on an apprentice.

CRS loaned a hand rubble crusher to another Solino entrepreneur with the agreement that we would buy back the crushed rubble at a fixed price for use in the foundations in the houses to be built. This energetic woman quickly grew her business, expanded it rapidly and when I met her in October she had a dozen employees.

CRS is also helping people in several communities form savings groups. These groups, comprised mostly of women, save small amounts of cash and lend it within their group to finance small business start-ups. Perhaps the most successful entrepreneur in the program is Laguerre, who used his savings and loans to start his own bakery. He now has eight employees and supports 30 orphans with his profits.

CRS doesn’t pretend we can solve all the myriad problems in Haiti. But working with communities, not for them, with the local Church and other partners such as Habitat for Humanity and the Haitian Government, we are supporting a powerful change that is lasting. Your support has helped us bring that change about.

Ken Hackett will be retiring as CRS President in the new year and Carolyn Woo will be taking over the position. They visited Haiti together in October, 2011.

Catholic Relief Services is the official international humanitarian agency of the Catholic community in the United States. The agency provides assistance to people in more than 100 countries and territories based on need, regardless of race, nationality or creed. For more information, please visit www.crs.org or www.crsespanol.org.