Hearing the music of mercy 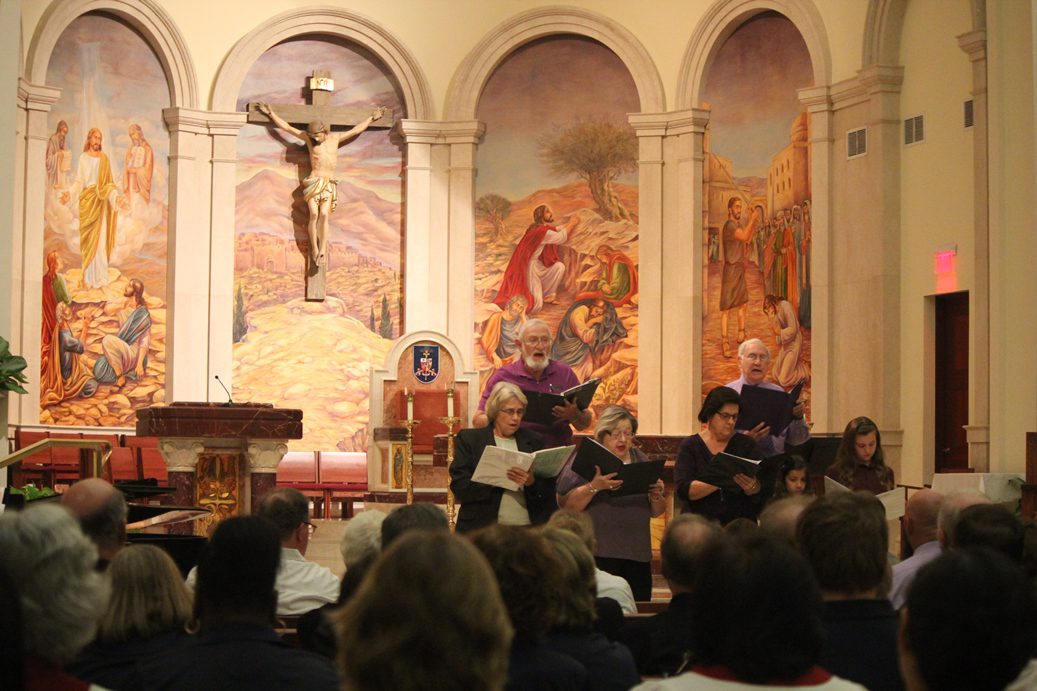 Members of the St. Charles Borromeo Parish choir sing at the Diocesan Choir Festival for the Year of Mercy at St. James Cathedral Oct. 21. Six choirs from parishes around the Diocese joined together to perform music centered on the theme of mercy in recognition of the Jubilee of Mercy. (ELIZABETH WILSON | FC)

ORLANDO | St. James Cathedral in Orlando filled with the majestic sounds as the voices of six combined diocesan choirs sang with one voice, “Misericordes sicut Pater!” (Merciful like the Father). From the theme for the Jubilee of Mercy, this was the opening performance at the Diocesan Choir Festival for the Year of Mercy on Oct. 21. Each of the choirs presented a selection of music with the theme of mercy and performed two songs united, with over 50 choir members joining together. The participating choirs from the Church of Our Savior in Cocoa Beach, St. Charles Borromeo in Orlando, Most Precious Blood in Oviedo, St. James Cathedral in Orlando, Holy Family in Orlando and, Church of the Resurrection in Lakeland, have been preparing for the choir festival since the early spring, with only one joint rehearsal the week before the concert.

“This is the resurrection of an event that used to be held every other year here in the diocese,” explained Mark Sibons, who organized the choir festival and is the director of music ministries at Most Precious Blood Parish. “There were enough of us old timers who remember it and remember the value of it for the choirs to get together. It’s really a shot in the arm to be able to sing with other people and make big sounds.”

The music ranged from prayerful and spiritual to upbeat, from traditional to contemporary. There was a hymn in Latin and the finale with the combined choirs was a lively African folk song, “Clap Your Hands”. While each song differed in tempo and tone they all had in common a message of mercy, uniquely expressed through the music and lyrics.

“I think music touches the soul,” said Joanne Dolnack, member of the Most Precious Blood Parish. She estimates that she has been singing in choirs for over 70 years. “Music is in the heart and if you listen to the words, especially with sacred music, you can’t help but feel part of the community, the universe, the family of God. It brings us all together.”

Rebecca Ryan, parishioner of St. James Cathedral attended the choir festival, and as a musician herself, she often hears God speak to her through song.

“I’m often caught up in tears with the message that he sends me,” said Ryan, “When you have talent you need to use it and I do it the best I can but I love to hear it. This was such a worthwhile event: a time to rest in the Lord and hear some music.”