Heroes of the Church: Diaconate Rite of Candidacy 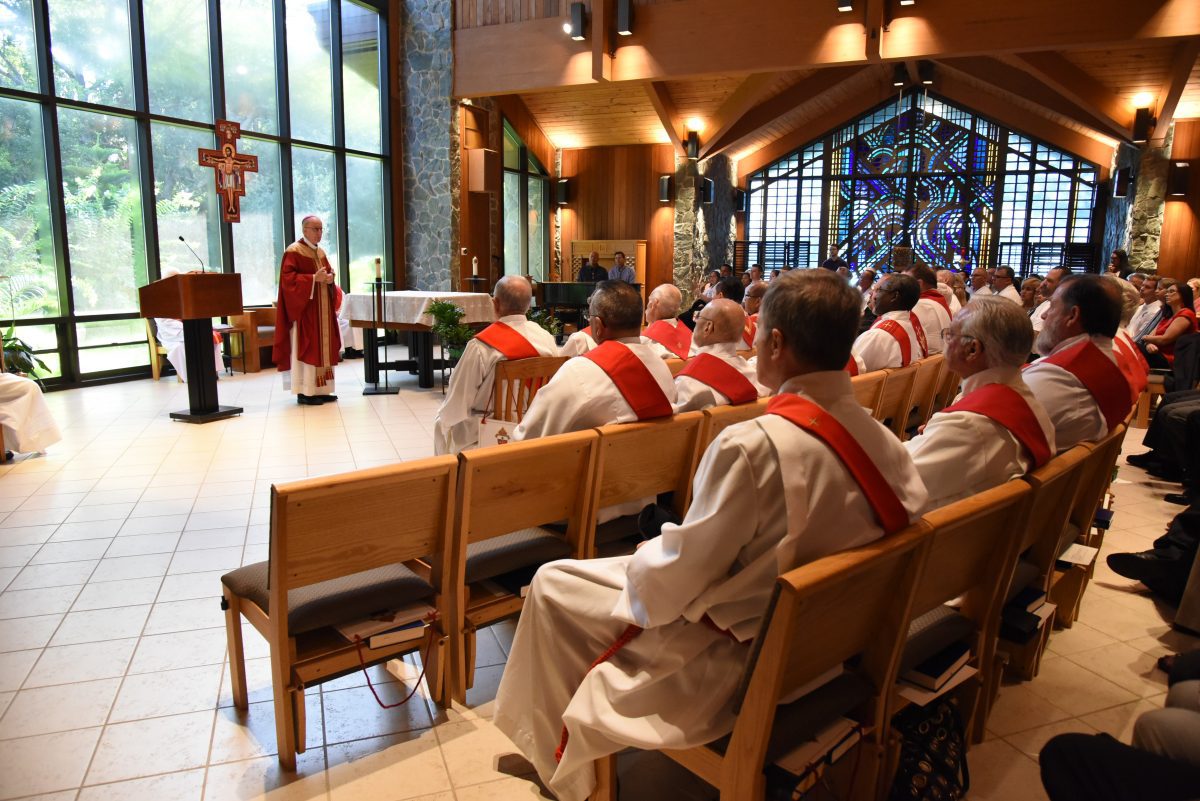 WINTER PARK | Nineteen candidates for the permanent diaconate answered a call to serve the Church, publicly declaring their commitment through the Rite of Candidacy on August 10. Bishop John Noonan blessed and prayed over the men at San Pedro Spiritual Development Center in Winter Park, before a standing-room-only congregation of priests, deacons, family, friends, and fellow discerners. He called deacons the heroes of the Church.

Joseph Bellissimo of Sacred Heart Parish in New Smyrna was among the 19. “The easiest analogy for what happened today is: you fall in love and you know you’re in love. You have that feeling and you do certain things as you grow in that love. You know it and the other person knows it and you moved towards a life together… You’re willing to take on the risks and accept the challenges because you know that it’s right, that it’s beautiful and that’s where you belong.”

Deacon Joe Gassman, secretary of leadership and parish life at the Diocese of Orlando, which oversees the permanent diaconate, would agree. “These men are pledging to complete their formation. They’ve been through a year of formal discernment to understand what they’re offering.” He compares it to wedding preparation or pre-Cana classes. The men then complete two years of aspirancy prior to petitioning to become candidates – a step that occurs at the start of the fourth year of a six-year formation process. Deacon Gassman explains the Church is discerning with them, “watching behaviors and responses to determine their level of commitment and accompanying them in their “yes” to the Church.”

Joe and his wife of more than 20 years, Edythe, began this journey three years ago after attending the final discernment night at St. Mary Magdalen Parish in Altamonte Springs, at the urging of Deacon Dave Gray. As they left, Edythe said, “For the first time in my life I have a purpose and the purpose is our faith and this is going to be fantastic for all of us – our family, you and I, and everyone we meet.” When Joe heard that from a mother of five, he felt there could be no greater endorsement for the call. The couple’s children are ages 12 to 22 years old—three in college and two at home.

The truth is, the Holy Spirit had been nudging Joe for years. “The Church has always been the center of my life, as a child, as an adult,” said Joe, as his wife added, “of our life together.” The couple met in Pennsylvania when Edythe was 19 and Joe was 21. Joe recalled being in Catholic school in second grade, asking God, “What are you calling me to do? Am I supposed to be a priest?” He had a sense the Lord had other plans for him.

Years later, he and Edythe found themselves in a mall in Boston that had a Catholic church. The two went in and Joe went to confession. After receiving the Sacrament of Reconciliation, he stood up to leave and the priest called him back: “Hold on a second. Do you think you should be doing more?” He and Joe spoke for some time. The priest told him to, “Just listen to God.”

A few months later, Joe was working the church bazaar at his home parish. It was almost midnight when his pastor approached him asking that they speak before he left. Joe, being an attorney, thought it must be regarding church business.

The pastor called him into the office and closed the door. Once again, the same question was asked: “Joey, do you ever think you should be doing more?”  Joe responded, “Yeah, you know that. What else do you need?”

“No Joey, more,” said the priest. “I think you’re called to the diaconate. You’ve been living this. Let’s make it official.” It would be another three years, when the Bellissimos settled in New Smyrna Beach, that Joe would be certain.

Edythe tells wives who hesitate, fearing they have no time, “God finds a way to allow it to happen.” Joe is quick to suggest, “People who say that are still trying to be in control. When you surrender, it’s a complete surrender and then nothing can stand in the way. It’s that simple.”

In his homily, Bishop Noonan referred to the Gospel reading in John 12 informing this surrender. “Whoever loves his life loses it. We are all called to love our lives because it is a gift. Jesus is saying whoever does not have God at the center of his life will lose it… That’s what the diaconate is about, selflessly giving of yourself. You’re called to be heroes, not just once or twice, but every day for the Lord.”

He added, “As Pope Francis reminds us, candidacy is like the Road to Emmaus. It’s your encounter with the Lord. Now let Him accompany you. In that accompaniment, you will learn more and more about your faith, and not just about yourself, but about your wife and your family.”

Edythe acknowledges this truth. “It’s one of the most rewarding and holy experiences that you’ll ever have. To be able to walk together on your faith journey is just something so beautiful. At times you get challenged, but you know this is exactly where you’re supposed to be.”

Deacon Gassman often asks candidates, how do you know you want to do this? Joe said he thought he knew, then formation revealed the deeper answer. “When you surrender, you fundamentally change – from everything you thought was important; everything you believed you needed to do, to what is truly important.” He spoke of Edythe as his pillar and companion. “There are times when I need help and times when I don’t know I need help, but she does. That is critical … This is growth in the first Church as John Paul II said, the family. As the family grows, so does your vocation.”

Deacon Gassman still marvels at the overwhelming beauty of the formation. “These men truly believe they’re going to make a difference, in the name of Christ, one soul at a time,” he said. The deacons and their wives have their feet in both worlds and they’re that bridge. People sometimes feel alienated or cannot relate—the permanent diaconate can make that connection; be the conduit that people can once again feel that their faith isn’t something historical, distant, like an antique that’s beautiful, but not really useable. We have a living faith because we have a loving God.”

By Glenda Meekins of the Florida Catholic August 21, 2019