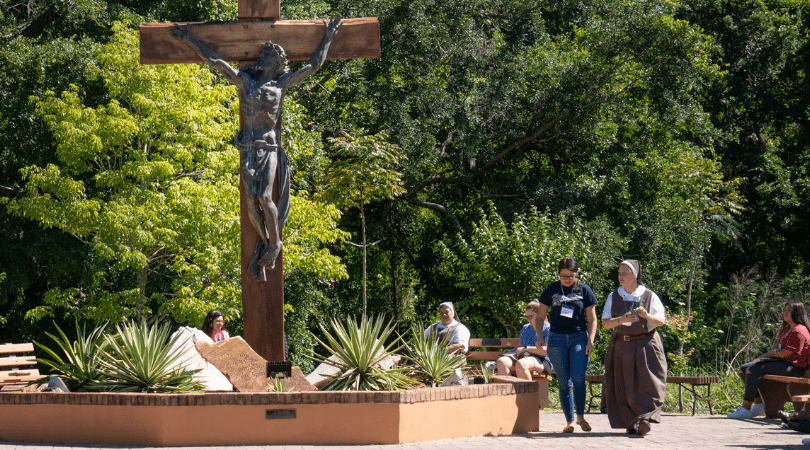 WINTER PARK | When high school freshman Johana entered her room at the San Pedro Spiritual Development Center, she found the mirrors in the bathroom had been covered up. In fact, she would discover all the mirrors at the retreat center were covered. She and the other young women who attended the Beloved Retreat April 26-28 would spend the weekend unable fix their hair or makeup, or check their appearance before heading out the door.

“They begin to understand that it is not what is on the outside that is important,” explained Sister Gianna Grace Perino, associate director of vocations for the Diocese of Orlando. “True beauty comes from within.”

The students who attended the Beloved Retreat were invited to rediscover their identity as a daughter of the Most High King, a relationship based on love and authenticity rather than “followers” and “likes”. It brought together high school students, religious sisters, and a team of peer leaders from the University of Central Florida’s Catholic Campus Ministry to discover the true beauty each of them has been given as a beloved daughter of God.

“There are so many misconceptions from our current society. There is so much confusion,” said Sister Perino. “We wanted to bring the young women into a greater understanding of themselves and their true identity.”

“We took away their phones when they showed up,” said Amanda Grace, retreat director and senior at UCF. “They were disconnected in a way that strangely allows them to better connect.”

Johana admits it took some getting used to but, in the end, she appreciated having the distractions removed so she could better focus on the message and have a deeper encounter with Jesus.

“Those things were very helpful, including the mirrors,” said Johana. “I personally forgot about my phone and gave up more of my time to listen to Jesus. It was difficult, but it was worth it. We weren’t focused on anything but what we had come for.”

The young women heard talks on identity, relationships, vulnerability, suffering, comparison, and freedom. An especially moving moment came when the attendees were asked to write down anything weighing on their hearts on a black piece of paper. The papers were torn and gathered in a basket placed before the altar during Eucharistic Adoration, symbolically giving their suffering to Jesus. Following Adoration, the scraps of paper were burned.

“We’re all recently out of high school ourselves, so we remember what it is like,” explained Davis. “If you’re not doing certain things then you’re not thought of as cool enough. We wanted to show that these are lies. A life of holiness and beauty can be lived and there’s no need to be ashamed of it. The core team is a witness of that.”

Johana said the small group discussions, led by the UCF students, helped relate the talks to their everyday lives. She also appreciated the times of praise and worship which helped her find a new way to meet Jesus in prayer.

“The retreat helped me a lot because I now know different ways to connect to Jesus; by singing, dancing or praying,” said Johana. “It’s been really helpful and I know that Jesus will always be here in our toughest times. I really do recommend any girl to experience the love in this retreat.”