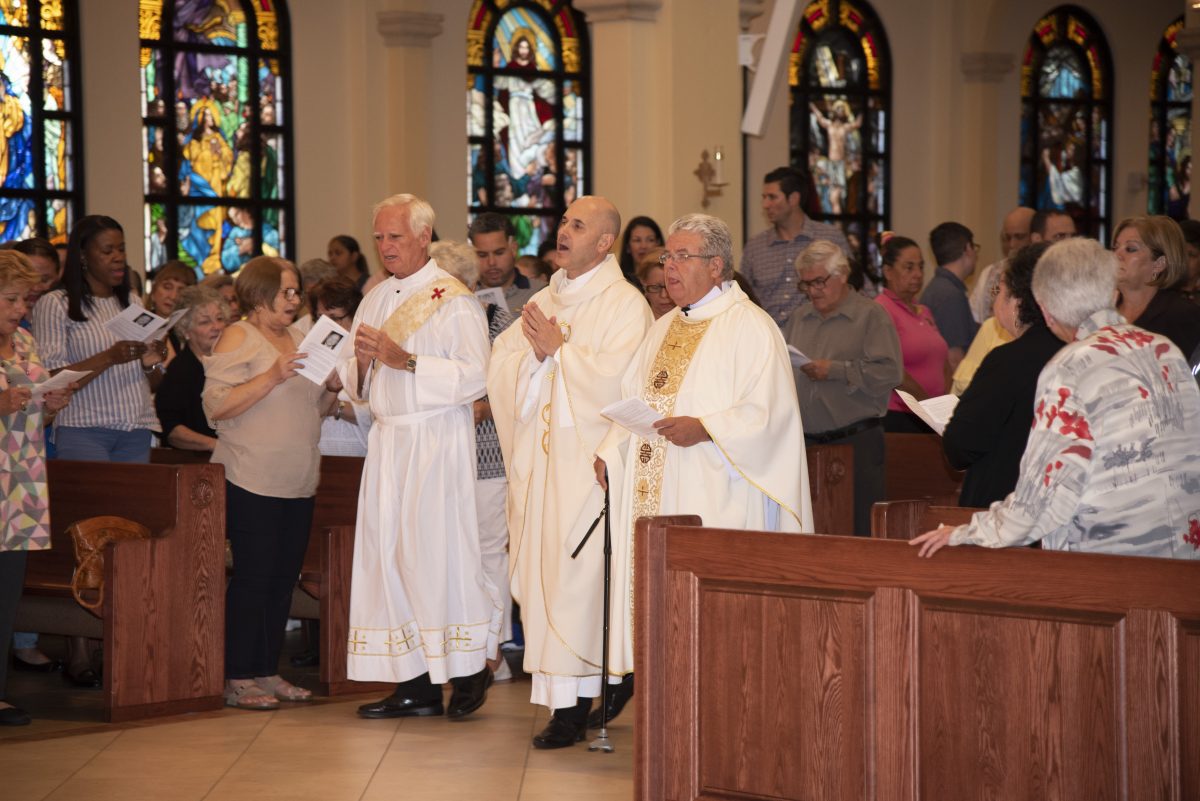 ORLANDO | Nearly 200 people gathered at St. James Cathedral to honor Our Lady of Charity, Sept. 9. Father Tomás Hurtado, pastor of St. Augustine Parish in Casselberry, arrived equipped with a statue of Nuestra Señora de la Caridad del Cobre, a gift from a former parishioner. “As a Cuban, celebrating and honoring Our Lady of Charity is always an honor,” he said. “This diocesan Mass wants to unite, not only the Cubans, but all the devotees of the Virgin Mary under the Our Lady of Charity invocation.”

Our Lady of Charity was declared patroness of Cuba by Pope Benedict XV in 1916. Approximately 300 earlier two brothers, Rodrigo and Juan de Hoyos, and a young black slave, Juan Moreno, were crossing the Bay of Nipe after collecting salt to cure meat for copper miners in the nearby town of Santiago del Prado (El Cobre). A storm surged and Moreno clutched his medal of the Virgin Mary and pleaded for protection. Suddenly, the waters subsided and a small statue of Mary holding Jesus came toward them, resting on a white bundle. With her was a wooden board with the inscription, “I am the Virgin of Charity”. The boys brought the statue home, and eventually a shrine was built in her honor. She is the patroness of refugees. Perhaps this is another reason why she is so cherished.

Father José Conrado Rodriguez came from the Diocese of Cienfuegos, Cuba to speak and concelebrate the Mass. He is familiar with the plight of Cubans at home and abroad and is known for his fervent fight for democracy and religious freedom in Cuba. “I feel the need, in each opportunity that God provides, to offer my love, affection, appreciation, respect and admiration for the Cuba in exile – to render that testimony of affection,” said Father Conrado. The 1600s were “a time of tyranny and of privilege,” noted the priest, touching on issues that Cuba and much of the world still faces. By the 1800s, the slaves of El Cobre were freed through the intercession of the Catholic Church, he said. “Our Lady was there, is still there, and always will be. That is why she is the font of our hope because she shows us the way and assures us that, if we are united to Christ in love, we will conquer.”

“Of course, for us Cubans, the Virgin of Charity reminds us of the homeland, our roots, the family that is still on the island and all the sufferings we have experienced as a nation with a communist regime,” said Father Hurtado. “But love is universal; charity is universal and goes beyond physical walls.”

Amelia and Antonio Goicouria are originally from La Havana, Cuba and have participated in the celebration of this annual Mass for several years. They left communist Cuba 69 years ago. Amelia still holds dear vivid memories of visiting the “La Cachita” in the small shrine of El Cobre with her family. Her father made a promise to visit the shrine in the mining town in the remote mountains. “The walls were full of charms accounting miracles granted,” she said nostalgically. Recalling past celebrations, she added, “Each day there are fewer of us. Before there were hundreds of us. If we do not pass it on, the institutions and traditions end with us.”

It is also the concern of Maria Knoll, parishioner at Annunciation Parish in Altamonte Springs, who helped coordinate the Mass. “My family was very Catholic. Despite the persecution in Cuba, we never left our faith,” said Knoll. “My mother lost her job and I could not go to the university because I was Catholic.” She remembers going to El Cobre, a 10 to 12 hour drive from her hometown of Cienfuegos, with her youth group. She hopes younger generations will also come to love Our Lady of Charity.

A few pews behind Knoll, there is hope. Ani Loaiza, a young Colombian native, reminisces when her mother first brought a statue of the Virgin home with her after a visit to the U.S. With her 8-month-old baby in her arms and 14-year-old son beside her, Loaiza said passing on the devotion is important. “I want them (her children) to know the traditions that my mother passed on to us – the rosary, devotion to the Virgin.”

As the Mass came to its conclusion, Father Hurtado attested, “We join with our brothers and sisters in Miami, with the Church in Cuba, with the Cubans around the world and with the brothers and sisters of other nationalities who love the Virgin Mary. The Hispanic community has a very special love for the Virgin. Being the Mother of Our Lord and Savior, Jesus Christ, she brings us closer to her Son. She is a bridge between heaven and earth. For Cubans in an atheistic regime, the Virgin of Charity was, for many, the refuge in times of sorrows and the safe encounter with the Child Jesus that she carries in her hand. Spiritually, for the Hispanic community, Our Lady of Charity nourishes us with the love of God as her title proclaims.”

By Glenda Meekins of the Florida Catholic September 18, 2019