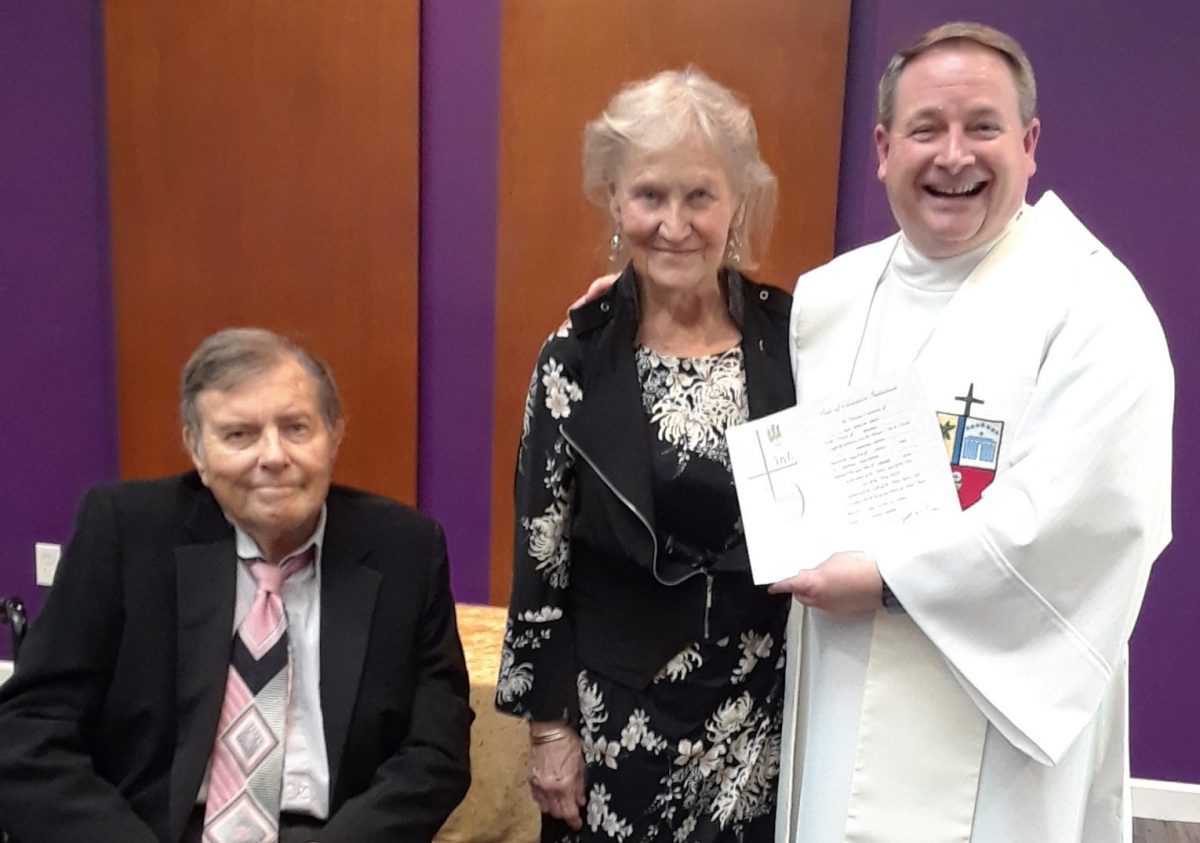 INDIALANTIC | From an early age, Lorraine Grosse enjoyed spending time with her Catholic friends, even going to Mass occasionally. “I was always very interested,” she recalled. Raised in the evangelical church, she had a strong Christian background, but was always drawn to Catholicism. It took decades, loss, and a new home at Zon Beachside Assisted Living for the conversion to the faith that long lived in her heart.

When she first arrived at Zon Beachside six months ago, she wasn’t sure what to make of it. She had recently lost her husband and could no longer live alone. Not knowing what to expect, and somewhat apprehensive, perhaps the most unexpected thing happened. She met Vernon Harper, a wounded Vietnam War veteran, and became friends. She began taking him to the weekly rosary and monthly Mass provided by Holy Name of Jesus Parish.

“Vern and I attend regularly,” said Grosse, better known as Bunny because she was born on Easter Sunday. Almost from the beginning, Harper began encouraging her by sharing his Catholic faith and eventually became her sponsor.

The warmth and love she found at Holy Name of Jesus urged her to inquire about becoming Catholic. Father Scott Circe provided some literature and guidance. Peggy Smith, life enrichment assistant at Zon Beachside, also helped. It was not long before she was ready. “Bunny is a delightful and wonderful woman and a model of Christian virtue,” noted Smith. “It has been such a privilege working with her and observing the joy she brings to fellow residents and our staff.”

On Jan. 8, Grosse became Catholic surrounded by her community in the Lighthouse Worship Center at Zon Beachside. Father Circe administered the Sacraments of Initiation – Baptism, First Holy Communion, and Confirmation.

“I felt the power of the Holy Spirit in a very special way,” she said. “It was a very moving and wonderful day. It means the world to me.” Harper is also delighted to have a new member in his faith family adding, “Bunny has become a very good friend and I am so glad she has become a Catholic.”