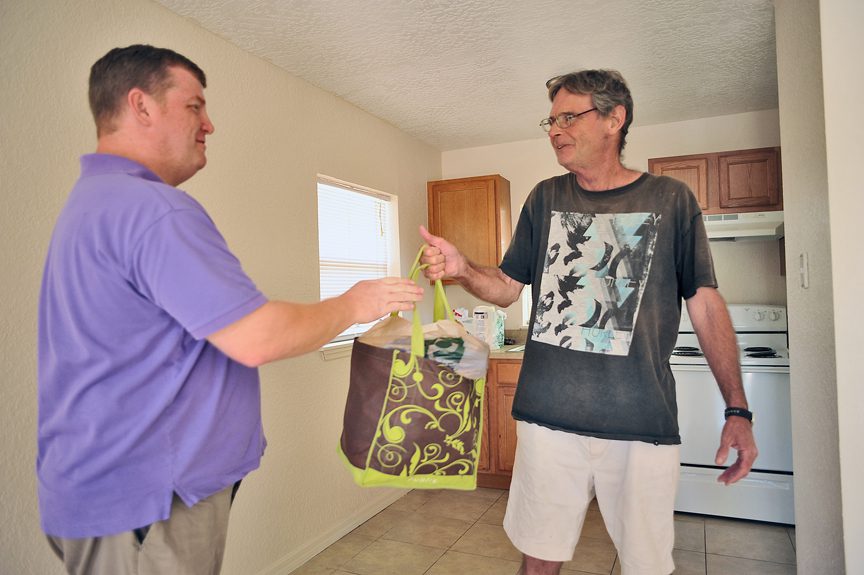 “This is the best part right here,” William said as he turned the key in the lock of his first home in almost 11 years.

A collaborative effort of Catholic Charities of Central Florida, Housing for the Homeless, Brevard Sharing Center, the St. Vincent DePaul Society at Holy Name of Jesus Parish, Ascension Parish Thrift Shop and Divine Mercy Radio, has given William the opportunity for a new life.

Originally from Hartford, Connecticut, William moved to Florida 30 years ago and has been in Brevard County since 2007.

“I made some bad decisions and became homeless,” he explained. “My financial situation became worse. I lost my car. My bicycle was stolen. I was attacked and needed four surgeries. Through the kindness of people at Holy Name of Jesus and Catholic Charities, I was able to get disability and I’m grateful for all the help.”

Catholic Charities of Central Florida in Brevard County coordinated the effort to provide all the necessities and was able to pay for rent and electrical deposits thanks to the Emergency Solutions Grant.

“You get into this work because you’re helping someone with a hand up,” explained Andy Schirmacher, a caseworker for Catholic Charities of Central Florida. “We’re excited to work with more and more people to get them off the street and into housing.

As William entered his new apartment, on the floor resting against a wall was a painting that he had admired in a caseworker’s office. It was a housewarming gift – signed by the artist, Joy Rothschild – the caseworker – and inscribed, “To William – my favorite client.”

“My first piece of furniture!” William delighted then wandered the two empty rooms marveling about the space.

He selected a cupboard in the kitchen to put away the items in the bag of groceries he had received at the Catholic Charities food pantry until Schirmacher reminded him that it was time to leave for his next appointment at the Brevard Sharing Center to pick out some furniture.

Being unable to work has been difficult for William. He worked at many jobs over the years, perhaps most proud of his time at Gerber Scientific Instrument Company. In 1978, he had been working third shift at a multi-circuit board manufacturer, but wanted to work first shift. On his way home from work, he stopped at Gerber Scientific Instrument Company to apply for a position. As he approached the main entrance a well-dressed man also approached and William held the door for him.

“I didn’t know who he was,” William said. “He asked me why I was there; I explained and was hired immediately. It was Mr. Joseph Gerber, the founder of the company who escaped a death camp in World War II. He came around and visited all of his employees, knew everyone’s job and personally handed out profit sharing checks. I learned a lot from him.”

William is still opening doors – despite having to shimmy around his walker – he is insistent upon holding doors for women.

“I am really happy for you,” said Paula Rebman, operations manager at the Brevard Sharing Center in Cocoa. “It’s amazing you’ve been homeless for almost 11 years and now you’re getting everything! Congratulations.”

William was taken aback and tried to decline the overwhelming generosity. He finally agreed that having a bed – box spring, mattress, bed frame was a huge upgrade from “sleeping on the dirt!”

“This is my birthday present,” he said. “My birthday is March 3 and so far I’ve gotten an apartment, keys to the apartment, food and now furniture.”

“I’ll be happy with whatever I receive,” William replied. “I feel like I’m in a space shuttle – I’m getting my life back again. I’m getting my personality back again. The journey has ended with home. I definitely will always remember this day.”