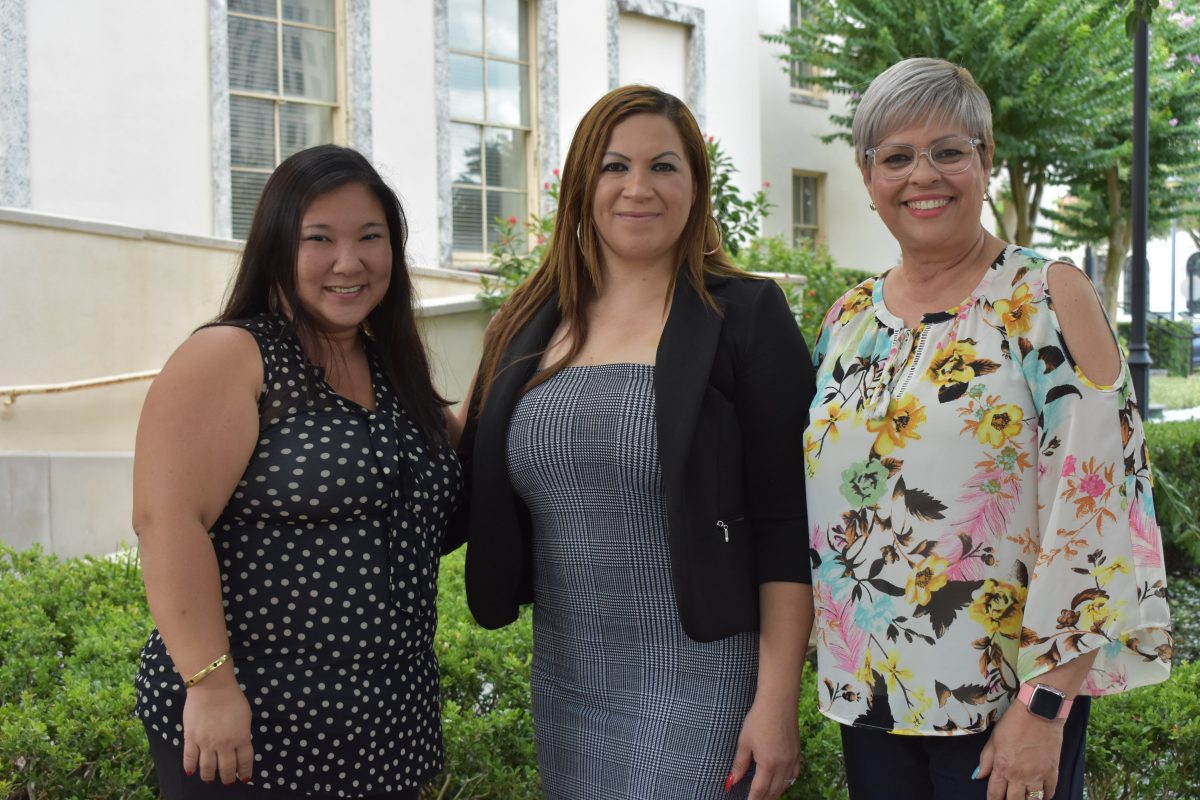 ORLANDO | After almost two decades of abuse, two kidnappings, escapes and almost getting killed, human trafficking survivor, Flor Turcio, shared her story of terror and how Catholic Charities helped her through it.

When Catholic Charities of Central Florida caseworker, Rosa Alamo, first spoke to Turcio in 2013, she was shocked.

“It was something like a movie you would see that you didn’t think was real, but that was her life and that of so many others who haven’t come to our office,” Alamo said.

That first meeting led to the beginning of a three-year relationship that would lead Turcio and her family to healing and wholeness. She would later write a book about her ordeal, “Esclava de un Infierno” (A Slave in Hell).

Her horrific tale began in 1979, at age 9 in a small, rural Central American mountain town. That’s when Turcio said she was molested. Living in extreme poverty, in a verbally and physically abusive household, she eventually left, hoping for a better life. For six years she stayed with friends or lived in homes where she worked.

“I was a young girl belonging to no one,” Turcio recalled. “I preferred it over returning to the abuse.”

When she was 17, she met a man who began “speaking of love.” It was the first time she heard anyone tell her she was loved.

“I was vulnerable. I wanted a home and children. I wanted someone to take care of me and protect me,” Turcio said. “I believed him. He won my love and trust.”

But he was a human trafficker and she had been easy prey — with no education and no family. Almost immediately, he took her more than 30 hours away to another place in Central America with the promise of marriage. When they arrived in a small border town, she discovered many other women, and even more men. The man — her fiancé but also her captor — began mistreating her, forbidding she speak with the other women. He paraded her around the local bars and introduced her to alcohol.

One night, he put something in Turcio’s drink. She awoke the next day to his screams and accusations of her sleeping with his brothers. With no recollection of the previous night, she learned she had been given over to several other men. He had set her up, and screamed at her, “If you want to be a prostitute like the others, that’s fine.”

Turcio was left ashamed, but she was still too afraid to return home. That night, he bought her nice clothes, make-up and a handbag, but not out of love or compassion. She learned he had four other women, and her fate was sealed as a “sex slave.”

Soon Turcio became pregnant, but when her daughter was born, the child was taken away from her in an act of blackmail. Within three months, Turcio was pregnant again. She would have three children in three years whom she barely saw because they were always taken away. She was told her escape would cost them their lives.

“Most of the men had an average of five women they managed,” Turcio explained. “We were all afraid they would hurt our children. We were trapped. The police were already bribed. There was no one to turn to.”

In 2004, Turcio was sent by the cartel to the United States. To avoid being caught, the women were moved from house to house. One night she was “given to a client” as his birthday gift. But he didn’t want to spend the night with her.

He called her “a woman of leisure,” but the moniker infuriated Turcio, who said, “Do you think it’s easy not knowing if you will live or die or what day it is? To be taken by drunk men?”

They talked to one another, but he never touched her. They became friends, and Turcio began to trust him. To protect her, he eventually involved the police without her knowledge.

By 2011, several traffickers were caught, and she and many other women were freed. She served as a witness for the Federal Bureau of Investigation, who reunited Turcio with her children in Tennessee.

While in Tennessee, she and her children — who were between the ages of 7 and 9 and had spent little time together — sought out the services of Catholic Charities for help. She eventually married her rescuer and tried to live a normal life while Catholic Charities in Tennessee provided services to reintegrate her into everyday living.

“They were like family,” said Turcio. “I could talk to them.”

But the nightmare wasn’t over. Despite staying out of the limelight and living somewhat secluded, her face was all over the news. She eventually moved to north Florida, but members of the cartel tried to kill her twice when she testified against them. She escaped her captors in 2013. They received life in prison. That’s when she made a promise to herself to never again hide from a life she did not choose.

“I knew I had to speak out so other women did not have to live the hell I had lived.”

She wanted women to gain courage and find hope. But it would take time. It was then that Rosa Alamo and Catholic Charities of Central Florida began managing her case.

Alamo admitted it was challenging at first because the caseworker never worked with a human trafficking victim. But Alamo recalled hugging Turcio and reassuring her of a personal commitment to help.

“That was a turning point,” Alamo said. “It helped (Turcio) a lot because she always had to be careful of who to believe, of who to trust. That moment made a difference in our relationship as a caseworker and a client.”

The years of trauma had left Turcio scarred, leading to a breakdown and hospitalization. Alamo was the only person who came to see her in the hospital. The caseworker encouraged her not to give up.

“She was no longer my caseworker,” Turcio said. “She was my friend. Once again I found a family there (at Catholic Charities).”

Alamo and Karen Kanashiro, an employment specialist, helped Turcio find a job, get counseling for her family, and enrolled her in English classes.

“I looked at them and thought, I can be like them. I want to be like them,” Turcio said. “They motivated me to study.”

In time, healing began and Turcio established, Fundación Libre de la Esclavitud Sexual (Foundation for Freedom from Sexual Slavery), to help trafficking survivors, to help others avoid trafficking, and teach women how to escape it.

She said her faith in God propelled her, as well as her children and her family. In her book, she dedicates a paragraph of thanks to Alamo.

“When I had given up, I didn’t find help. I found a family in Catholic Charities,” Turcio said. “My faith helped me through it all – to believe that I would see my children again and would be with them; that one day I would leave that world and be a normal woman.”

Alamo and Kanashiro continue to keep up with Turcio. Last year they joined her at her book signing. Alamo said her interaction with Turcio taught her to be more merciful and compassionate.

“It’s been great to see how she went from being that person to the woman she is now – secure and willing to help others who went through the same things,” Alamo said. “It was a great opportunity for me, as a human being, to grow as a Christian.”

Today, Turcio is studying to become a detective and currently works with several government agencies to fight human trafficking. She is specializing in victim assistance and hopes to educate women and young girls so they will not be victimized. She shares her testimony across the United States and Mexico and feels God is with her every step of the way.

“Today, my faith tells me that I can help other women,” she said. “My faith always helped me not fall.”