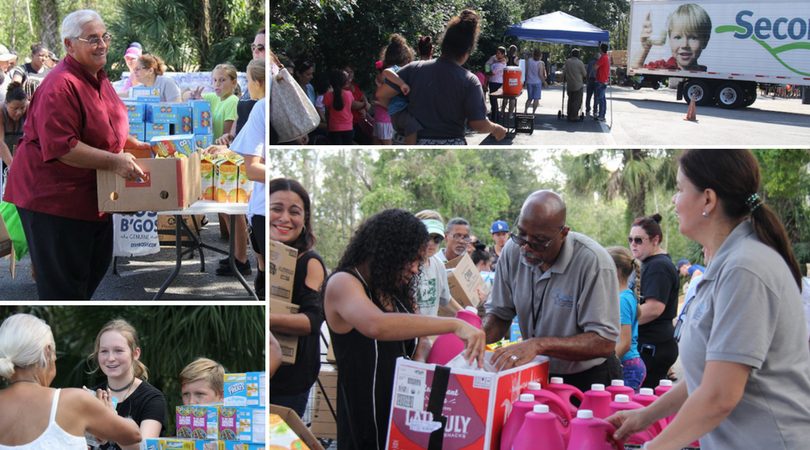 By Glenda Meekins of the Florida Catholic staff – September 20, 2017

ORLANDO | “All my food was damaged since we lost power Sunday. I have six at home to feed so I am grateful,” said Diana Hurtado. Catholic Charities of Central Florida, together with Second Harvest Food Bank, provided food to at an emergency mobile food drop on Sept. 15 to people who had been without power since Sunday, when Hurricane Irma’s winds began to blow.

As John Bonfiglio, food and facilities manager for Catholic Charities of Central Florida addressed the 50 plus volunteers who came out to assist, he told them “This does not end today. This is the beginning.” It was the start of nine total food drops throughout five counties, meeting the needs of those without food or power after Hurricane Irma. Catholic Charities of Central Florida coordinated with various state and local agencies to provide the mobile food drops at locations throughout Polk, Lake, Volusia, Brevard and Orange counties.

Lenín Pulgar found out about the drop through friends. He is living with his daughter and recently came from Venezuela for cancer treatment. “I am in love with God every day. For me this is a gift from God,” said Pulgar who is a known composer in his homeland. He hopes to write a song expressing his gratitude.

Gary Tester, Catholic Charities of Central Florida executive director, said help was coordinated through the Florida Conference of Catholic Bishops (of which Catholic Charities forms a part) and Florida VOAD (Voluntary Organizations Assisting in Disasters). Gabe Tischler, the conference emergency management specialist, helped the entities coordinate their response and requested the state, through FEMA, to receive aid. Then, parishes served as distribution sites.

Agape Food Bank in Lakeland, working with Feeding Florida, also sent food up through Lake County. “We’ll be working to move food to the Diocese of Venice and possibly to the Archdiocese of Miami,” said Tester. He added, “We’re already arranging caravans of volunteers to take food up into the Ocala National Forest to the mission there. We just arranged to get food to Brother’s Keeper in Ocala.

“Right now it’s simply a matter of knowing where our resources are and connecting as many dots as we can. If we think about the most basic needs, the ability we have to simply provide food and water at a time when that’s hard to come by makes a great deal of impact on those who just need to know they can eat today.”

Any food that remains undistributed will go to stock Catholic Charities food pantries around the area “so they have food and water for folks in the coming days as they slowly get their power back on. It gives a great message of hope,” said Tester.