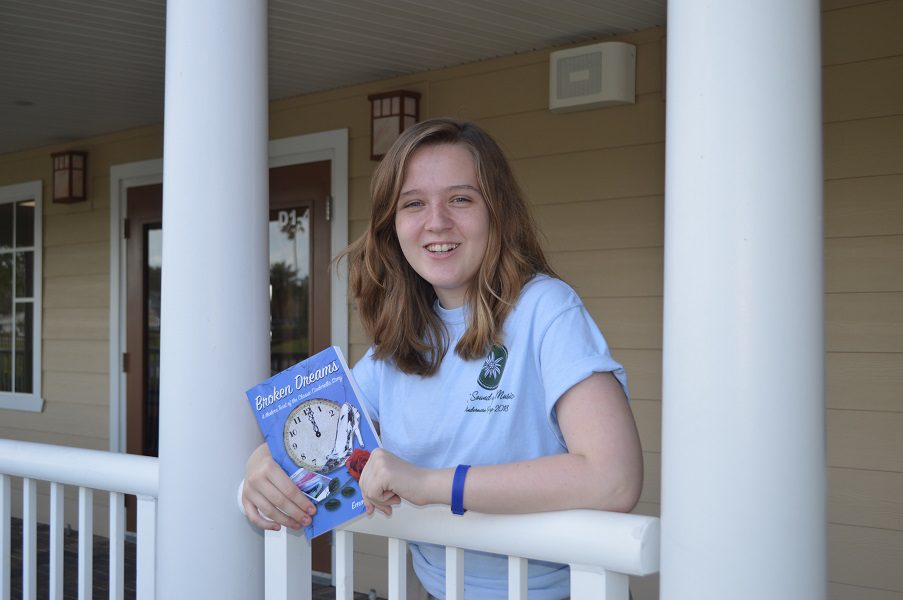 Emma was diagnosed with hypertrophic obstructive cardiomyopathy (HOCM) midway through her seventh grade year while attending Holy Family Catholic School in Orlando. The young athlete’s life radically changed. What would she do without basketball, softball, track and dance? Despite the initial blow, Emma never imagined the abundant gifts God was waiting to reveal.

“It was right before Christmas break and we were just finishing up learning about how the heart works,” remembers Emma. A trip to Philadelphia to confer with another doctor soon confirmed the diagnosis of HOCM, a thickening of the myocardium that restricts blood flow out of the heart, increasing the chance of cardiac arrest.

“When you have this illness, you feel very different from everybody else because you can’t participate in P.E. as much or do all the sports I used to do with my classmates,” said Emma, now almost 16 and in 10th grade. “It felt very isolating and I felt like I didn’t fit in anywhere. I honestly think it helped my faith because, when you’re really feeling alone and you don’t feel like there’s anybody there, then you really turn to faith,” she said.

After her diagnosis, Emma turned to drama which she says is one of her best memories while at Holy Family. With dreams of becoming an actress, she focused on honing her craft and played the lead role of Cinderella in the musical ‘Into the Woods’. Returning from rehearsal one day, her father Kevin, a writer himself, suggested she write a book about Cinderella in the future. At first, she wasn’t interested, but her role in the musical, gave her a “connection with the character,” she said. “This could work if I put my own spin on it,” she thought to herself. And it was then that her first book, Broken Dreams, was born.

“I guess my father was just trying to find other outlets for me to express my feelings and emotions – to not feel so isolated and pursue something else, since I’d had to give up everything,” said Emma. It was a logical next step and she credits Holy Family for opening up opportunities that enabled her to discover a capacity for writing. Lucretia Head, her seventh and eighth grade English teacher, encouraged Emma to participate in essay contests and the Diocese of Orlando’s Ace Reporter program, an avenue for youth to evangelize through reporting. So she took the chance, claiming the techniques and advice she was given, “were a great stepping stone to what I am today and who I became.”

She is currently working on several more projects and another book coming out this fall which she says will be “a very female empowering story for all those who struggle with their own problems and pain.”  Emma is also branching out into screenwriting and is currently developing a Christmas movie for the Hallmark channel.  She often wonders how she finds the time to do so much and recalls the musical Hamilton, saying “I write like I’m running out of time because I’m always writing. I have so many ideas I really want to tell the world.”

Emma currently volunteers at Holy Family, Make-A-Wish Foundation and other organizations. She hopes to one day help children with the same illness. “It took me a while to get over the fact that I have this illness,” she acknowledged. “And that it will change my life dramatically. Only recently, since the book came out, have I discovered that when an old door closes, a new one will open. I am really discovering who I am meant to be.”

Emma donated a signed copy of her book to the Holy Family school library.

“God has changed everything around for me. When I was first diagnosed, I really thought He wasn’t on my side with this. But as I grew more, I realized, He has to be there looking out for me if this is what He’s given me. He’s obviously given me this condition to turn me in the other direction. This is probably what He wants me to do.”

By Glenda Meekins of the Florida Catholic – June 14, 2018
Editor’s note: The family’s last name was omitted to protect minor children.