In the Church We Are All Missionaries and Disciples

“Baptism brings us into the People of God, makes us members of a People on a journey, a pilgrim People in history,” Pope Francis asserted, quoting words from the Second Vatican Council during his Wednesday catechesis at the general audience, which was dedicated to the first of the sacraments. 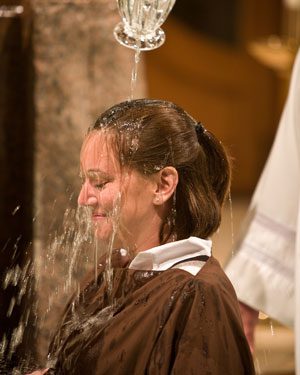 “Baptism brings us into the People of God, makes us members of a People on a journey, a pilgrim People in history,” Pope Francis asserted, quoting words from the Second Vatican Council during his Wednesday catechesis at the general audience, which was dedicated to the first of the sacraments. He explained how life is passed on from generation to generation and that “through rebirth at the baptismal font, grace is also passed on from generation to generation. With this grace the Christian People walk through time, like a river that irrigates the earth and spreads God’s blessing throughout the world.”

The disciples “went forth to baptize. From that time to today there is a chain in the transmission of faith through Baptism. Each of us is a link in that chain, a step forward always, like the river that irrigates. Thus is God’s grace and thus also our faith, which we should pass on to our children, pass on to the children so that these, as adults, can pass it on to their children. This is Baptism … it brings us into this People of God … who walk and who pass down the faith.”

Through Baptism, each of us becomes “missionary disciples, called to bring the Gospel to the world. Each of the baptized, whatever their role in the Church or the educational level of their faith, is an active agent of evangelization. … The new evangelization should involve … a new central role for each of the baptized. The People of God is a People of disciples because we receive the faith and a missionary People because we pass on the faith. This is what makes Baptism in us: it gives us Grace and transmits the faith. All of us in the Church are disciples, always and for our entire lives; and we are all missionaries, each in the place that the Lord has assigned us.”

“All of us,” the Bishop of Rome emphasized, “even the smallest is a missionary and the one who seems greater is a disciple. Some of you will say: ‘Bishops aren’t disciples; the bishops know everything. The Pope knows everything and isn’t a disciple.’ No, even the bishops and the Pope are to be disciples because, if they aren’t, it’s not good; they can’t be missionaries; they can’t pass on the faith. All of us are disciples and missionaries.”

“No one is saved by themselves,” the Pope said to the thousands of persons gathered in St. Peter’s Square. “We are a community of believers and in this community we feel the beauty of sharing an experience of love that proceeds us all, but that at the same time asks us to be ‘channels’ of grace for one another, in spite of our limits and our sins. The communal dimension is not only a ‘frame’ or an ‘outline’ but an integral part of the Christian life, witness, and evangelization.”

Pope Francis ended by recalling the history of the Christian community in Japan, whose persecution at the beginning of the 17th century caused many martyrs. “Members of the clergy were expelled and thousands of faithful were killed. There was no priest left in Japan; all of them were expelled. The community retreated into hiding, keeping their faith and prayer hidden. When a child was born, the mother or father baptized them, since all the faithful can baptize under particular circumstances. When, after two and a half centuries, 250 years later, the missionaries returned to Japan, thousands of Christians came out of hiding and the Church could flourish. They had survived through the grace of their Baptism! This is great: the People of God pass on the faith, baptizing their children and carrying on. They had maintained, even in secret, a strong communal spirit because Baptism had made them to become one body in Christ. They were isolated and hidden but were always members of the People of God, members of the Church. We can learn so much from this story!”