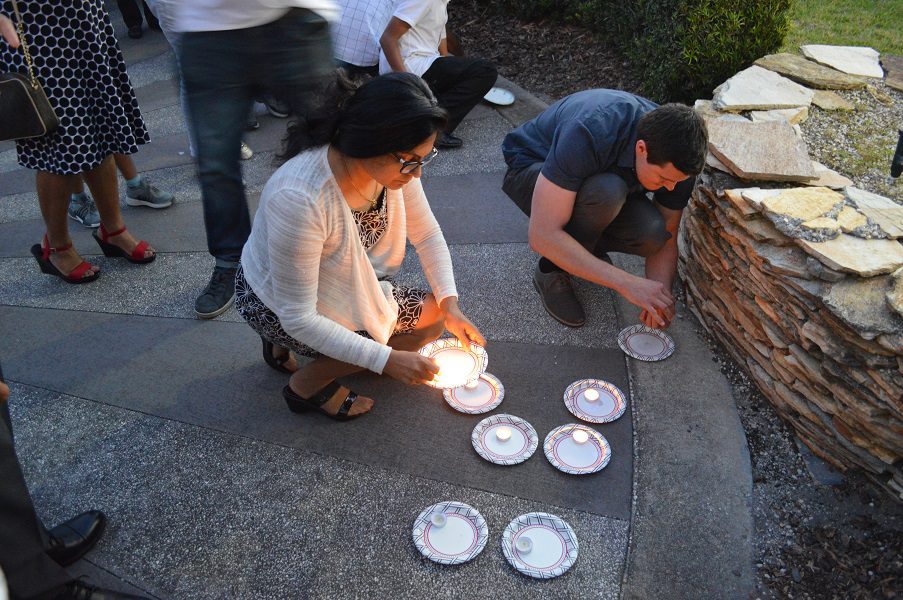 ORLANDO | It was some time before midnight Holy Saturday when Percy Fonseka, a native Sri Lankan and parishioner of Holy Family Parish in Orlando, received the text, “There’s been a blast.”

Although almost 10,000 miles separated Fonseka from his native country, it only took five minutes for the news about bombs that tore through towns in Sri Lanka to arrive to his phone. The text came from a friend who served with him in the military. Although the first text was a shock, a second text shortly followed, and it was harrowing: “It is not a blast, it is an attack.”

“I was so shocked. I could not believe it,” Fonseka recalled. “I called other colleagues and family to find out what was going on. While we were on the phone, more calls and radio messages started coming in.”

It was around 9 a.m. Easter Sunday in Sri Lanka when eight bombs exploded in three churches and three luxury hotels in the capital of Colombo, and the cities of Negombo and Batticaloa. Fonseka stayed up all night watching the horror as it developed half a world away. The bombs injured more than 500 and killed 253 people, including the wife and daughter of Fonseka’s relative. The husband and father had just dropped his wife and daughter at the entrance of St. Sebastian Church near Negombo and was headed to park his car when he heard his daughter call out, “Come fast. Come fast.” Then the blast went off, killing them both. Another school friend of Fonseka’s lost a wife and three children.

“I believe they’re in God’s hands, Jesus’s hands,” Fonseka said of those killed. “We don’t know what to do and what not to do. I have three boys and I have no words to say, but that we have to live on. This is the world we are living in still.”

An ISIS terror group took credit for the Easter bombings, and in its aftermath Sri Lanka is once again hurting and struggling. Having studied in Pakistan for three years, Fonseka could not reconcile the acts of terror with his personal experience with the Muslim community. While in Pakistan, that very community helped Catholic students attend Mass and participate in prayer by creating a space for them on campus for their religious services.

“Even in Sri Lanka, we all lived together. We did not have any misunderstanding,” he said. “I am not blaming everybody. This is a very small group.”

Sri Lanka has been a country that suffered from strife, including a 26-year civil war. That ended in 2009 with 100,000 deaths. Fonseka and his eldest son came to the United States in 1998 “for safety and security.”

“We do not need any more of this. Enough is enough. Our country can’t take another thing like this,” Fonseka said somberly. “We can live together. We need peace. It does not have to come at such a cost.”

To assuage his grief and that of his people, Fonseka sought out his pastor, Father John Giel, asking him if an interfaith service could be offered to honor those who perished and offer healing for those grieving. The idea was “warmly welcomed,” Fonseka said.

Noelani Parys, a fellow Holy Family parishioner and Sri Lankan, helped Fonseka organize the service. Her father, who is in Colombo, alerted her of the bombing Holy Saturday night. Parys began frantically calling to make sure her family in Negombo and Colombo were safe. Although no one in her immediate family suffered, she has friends who lost loved ones. She agreed with Fonseka that the service could provide “healing, because everyone was devastated.” The interfaith service was held at Holy Family Parish in Orlando April 27. The gathering was an opportunity for people of all faiths to share their grief and understand that there should be no hatred against the perpetrators.

“We have to heal the matter. Otherwise we keep everything inside and suffer from inside,” Fonseka said. “I wanted us all to talk together.”

The evening mirrored the unity of which Fonseka spoke. Beginning with a procession of the Sri Lankan and American flags followed by a liturgy, Deacon Richard Dodd of Holy Family Parish, and Imam Tariq Rasheed of Islamic Center of Orlando, spoke and extended their condolences and prayers. “We have been here before. We remember the evil power of violence when it has arisen in recent times, whether in New Zealand or Pittsburgh, in Paris or Orlando,” Deacon Dodd said. “Always, the children of God gather to pray so that they can see God’s presence and be God’s presence in the world.”

As he witnessed members of the Islamic Center sit with members of others faiths, Imam Rasheed noted how on the same street where Holy Family is located, there is a Hindu temple, a synagogue, a mosque, and many other churches – living together for many years in peace.

“If we have love, we should share love. If we have compassion toward people, no matter what they’ve done to us, we should continue to be compassionate to the people,” the Imam said. “We will do this irrespective of whatever else is happening in the world.”

Afterwards, those assembled gathered to share their sorrow with the interfaith community, which came to offer their support and consolation. The evening ended with a candlelight service next to the Holy Family statue. Everyone lit a candle as prayers were offered for the deceased. Parys, who attended the service with her husband and baby, said the moment was heartbreaking, but helped bring peace of mind.

“Deacon Richard’s reflection on the liturgy was teaching us how to make up our minds and give us peace,” she said. “It’s not going to be easy, but this brought us closer to having peace about the whole incident.”

For Fonseka the interfaith service marked the beginning of the healing process for the Sri Lankan community. He saw Deacon Dodd’s point, that the readings at the service reminded all “who we are, whether Catholic and Christian, Jewish or Muslim, Hindu or Buddhist — in this holy place, in community and in peace, we are children of God.”

Two weeks after the tragic events, Sri Lanka churches reopened. Fonseka told his family back home, “You need to go to church. We need to believe in God. Jesus was resurrected Easter Sunday. We cannot discourage people from going back to church.”