On May 13, the anniversary of the first apparition of Our Lady of Fatima, the Basilica of St. Paul in Daytona Beach hosted a May Procession, an international celebration of Mary, the Queen of Mercy. 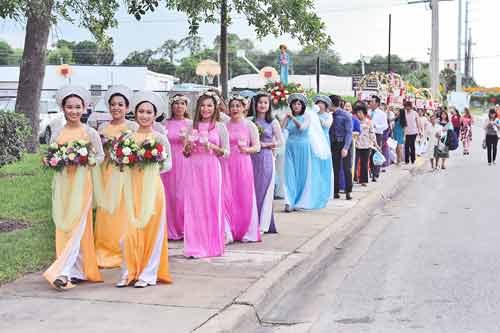 On May 13, the anniversary of the first apparition of Our Lady of Fatima, the Basilica of St. Paul in Daytona Beach hosted a May Procession, an international celebration of Mary, the Queen of Mercy.

“She is a loving mother to all of us who shows mercy that we should show to one another. She reflects Christ’s mercy,” said Father Tim Daly, pastor of the 125-year-old Daytona Beach church that was designated as a basilica in 2006.

The procession moved along the outside of the church grounds and entered through the front entrance of the church’s four massive red doors of mercy.  First communicants and altar servers processed with elder members of the church. Some individuals carried symbols honoring the Blessed Mother, including a painting titled “Celestial Queen of Mercy” created by 95-year-old parishioner, Rita Tomassini-Paterno.  Some dressed in traditional attire to represent their cultural heritage, and to showcase the universality of the Church.

Inside the church, participants had time with the Lord with Adoration of the Blessed Sacrament and they prayed the Rosary in five different languages, Vietnamese, English, Polish, Spanish and Filipino. Hymns to the Blessed Mother were sung in native languages before each decade.  Members of the Vietnamese community performed a liturgical dance after the Rosary. 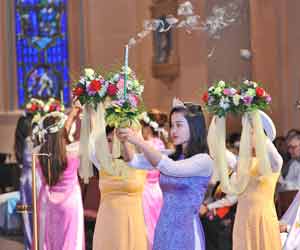 “I was just spellbound,” said Bernis O’Dell, a member of the pastoral council who attended the event. “The Holy Spirit was with us for sure.”

“It truly showed us as a Catholic, meaning universal, Church,” Father Daly said. “And it was appropriate that we had many languages praying the same prayer two days before the celebration of Pentecost.”

A potluck dinner, including foods from five different cultures, followed the event.

“I was overcome by complete joy. It was way beyond what I expected,” added O’Dell.

Next year’s event will take place on Friday, May 12, 2017, the vigil of the 100th anniversary of apparition of Our Lady of Fatima.

Did you know between May 13 and October 13, 1917, three Portuguese children received apparitions of Our Lady near Fatima, Portugal. Mary asked the children to pray the rosary for special intentions, including world peace.

Hail, holy Queen, Mother of mercy, hail, our life, our sweetness and our hope. To thee do we cry, poor banished children of Eve: to thee do we send up our sighs, mourning and weeping in this vale of tears. Turn then, most gracious Advocate, thine eyes of mercy toward us, and after this our exile, show unto us the blessed fruit of thy womb, Jesus, O merciful, O loving, O sweet Virgin Mary! Pray for us, O holy Mother of God. That we may be made worthy of the promises of Christ. Amen.

O my Jesus, forgive us our sins, save us from the fires of hell, and lead all souls to Heaven, especially those in most need of Your Mercy.