Is it possible to have unity amidst diversity? 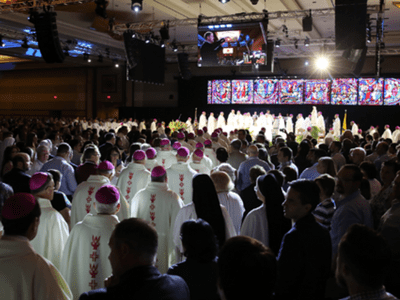 In this week’s blog, Unpacking the Convocation: Unity Amidst Diversity, CRL Executive Director, Jim Ennis, continues his CRL Blog Series. In this series, he shares insights about his experience and what he learned while attending the 2017 Convocation of Catholic Leaders.

“Too often in our society our differences can separate us. We tend to surround ourselves with people who look like us, think like us, talk like us and worship like us. We are very quick to judge people who are different from ourselves. And it can be very uncomfortable and awkward to be with people who are different from us. I know there were times during the Convocation that I felt that awkward feeling, and I had to lean into the moment and be willing to join into discussions with folks who were not like me, who didn’t talk like me and didn’t look like me. And at the end of those discussions, I was often blessed and convicted. Blessed, because I heard perspectives and insights I had never thought of before. Convicted, because I had judged the group before I had even joined them.

One example for me occurred on the very first evening of the Convocation. I came into a large room and we were told to find a seat at one of the 50 tables there. I didn’t initially recognize anyone in the room, so I picked a random table where I didn’t know the individuals…”