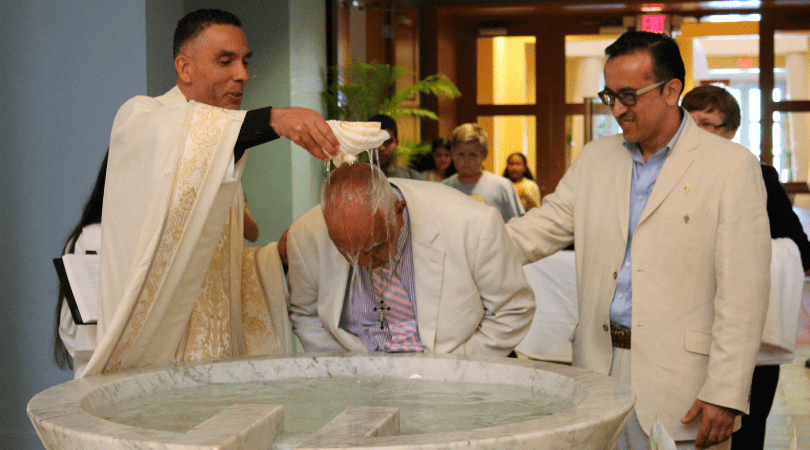 ROCKLEDGE | When José Armando Rengifo was 12 years old, he frequently passed by a church in the suburb of El Cerro, in La Habana, Cuba where he lived. After watching boy scouts play racquetball with the local priest, he asked his father if he could join. Little did he know that request would lead him on a spiritual journey to becoming Catholic 76 years later.

The Holy Spirit was working on the St. Mary parishioner all along. “One day (at Boy Scouts), the priest asked me, ‘Do you go to church?’” recalled Rengifo. “I replied, ‘No, but I would like to go.’” He began participating in the Mass the very next morning and has been part of church ministry for more than 70 years. “I served in the St. James Cathedral choir for 20 years and helped in other ministries,” he said. “I always received Communion, not realizing I shouldn’t.”

Rengifo began attending Mass at St. James when he moved to Orlando from Puerto Rico because it was his son’s parish. “I felt very at home there and loved participating in the choir. I felt at peace watching my grandchildren run into the church.” However, he admits, “I really knew the Lord in the church where I assist now (St. Mary Parish, Rockledge), led by Father Ivan (Olmo).”

A parishioner for several years, it was a Sunday in February when he had the epiphany. As he stood in line for Holy Communion, he began to recall his mother’s silence when he asked her if he was baptized and wondered what it meant. “I began to think… I am not baptized. I cannot receive Communion.” He immediately spoke to Father Olmo, his pastor, and enrolled in the Rite of Catholic Initiation of Adults (RCIA).

“You can imagine our surprise,” said Father Olmo. “We had no idea he had not received the Sacraments. He was so involved in the parish.” Father Olmo assured Rengifo he could make his desire to be welcomed into the Church a reality.

Accompanying him on his journey through RCIA was his sponsor, Edgar Serrano. Serrano, who recently applied to the seminary, said he was moved by God’s love and Rengifo’s willing response. “It has been a beautiful experience,” said Serrano. He (Rengifo) has a very sincere love for God, which he offers to Him genuinely and voluntarily. He is living faith in action.”

On Easter Sunday, April 21, Serrano stood behind Rengifo with his reassuring hand on his shoulder. There to share the momentous occasion were 9 of Rengifo’s 10 children and most of his grandchildren. He said he hopes his commitment will encourage them to also grow in faith.

At age 87, Rengifo is proof it is never too late to become Catholic. “It was the best day of my life,” he said. “I am a new man.” He looks forward to continuing serving in the choir as a full member of the Catholic Church.