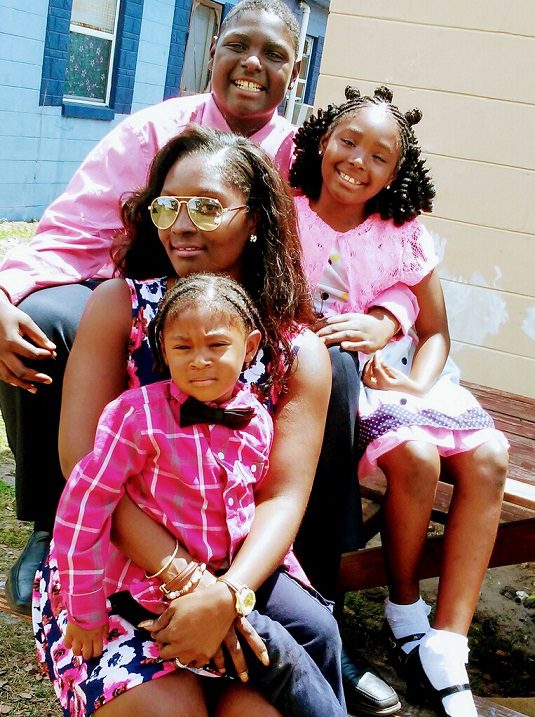 Shanaya Mims is what Catholic Charities of Central Florida caseworker Abigail Crocket describes as “a dream client.” Despite the curve balls that life has thrown at Mims, her resilience has been rewarded and things are looking up for the first time in a long while.

Mims came to Catholic Charities through a referral from the United Way, via Paramore Kids Zone, a neighborhood agency working with families in that area. Crocket helped Mims, teaching her how to track and prioritize her expenses, budget and shop wisely. The Family Stability Initiative program at Catholic Charities is designed to assist families to stabilize and break the cycle of homelessness. Mims and her family had been without a home for five years before finding Catholic Charities.

“My life hasn’t been an easy one,” says Mims. “I had lead poisoning as a child. After moving from Massachusetts, I was placed into a foster care home. My life has been and up and down rollercoaster and it still is. I had my first child at 15 and I’m a mother of three children now. I’m a domestic violence survivor. Truly by the grace of God goes me.” Yet she refuses to let it get her down, seeing her young pregnancy as a saving grace—crediting her son’s birth with saving her life. “As a teenager, I was facing a path of destruction and I felt my son came into my life at the right time,” she said emotionally. “He humbled me to know that there is more than just what I see. And I thank God.”

The third of eight children, and one of the five who went into foster care when Mims was 7 years old, her recollection of the events are still unclear. After three years, she was returned to her home, but it would be several years before all of her siblings would be together again. Now 28, she is working hard to provide for her children and her mother. Although they drifted apart, Mims reconnected with her birth mother three years earlier when her mother’s health began to deteriorate from congestive heart failure. She now awaits a heart transplant. At the time, both were homeless, living out of a rental car at first. Later her children lived with a friend for several weeks while she lived on the streets. When they found an affordable hotel, it was an improvement. Eventually they found a house, but “it’s been rocky,” said Mims. The home had no stove or refrigerator.

“It’s been really hard to stay afloat with three kids and not really getting support from their father,” said Mims. “It’s hard dealing with that and mom’s health condition, being so young and trying to strive in my life and do better, but I feel that with Catholic Charities willing to take these baby steps with us, that’s my main goal, doing better.”

Crocket found Mims and her family a house and said of Mims, “She’s willing to do whatever it takes to better her situation and family life. She’s been amazing to work with.” Crocket is most impressed with Mims “strength and her resiliency, her ability to put her family’s needs above all else and her willingness to sacrifice her own happiness in order to make sure that her mom is taken care of.”

Through United Way’s Homeless Prevention stabilization funds, Crocket was able to place Mims and her family into a home six months ago. Although she still struggles she says, “Good people have been put in my path—complete strangers. My faith in God has always been strong, since I was a little girl when I gave my life to Christ.” She stressed her gratitude, “… feeling that someone really does care and generally loves doing their work and being in their profession of social work—I feel that from Miss Abbi. She gives me extra direction where I can get a fresh start or whomever is capable in the community and how they can help out. So, I am very appreciative of Catholic Charities and all they have provided for me and my children. It’s still an uphill battle, but I think with this battle I am gaining more confidence in myself, to know that I can make it; I want to make it and know that I can survive it all.”

With a safe place to live, Mims children are thriving and celebrated Easter with an egg hunt in their own home. “I admire their personalities. I am blessed with beautiful, healthy, strong kids who are smart and capable of what God is willing to provide for them,” she said. Boasting in their accomplishments, she noted how each was progressing now that stability had been restored to her life. The eldest recently participated in a mission trip, her daughter is on the honor roll and her youngest son is thriving.

Looking toward the future, Mims said, “Ultimately I would like to advocate one day because there are a lot of people who go through a lot of things and can’t make it in this world, but you have to be strong. They still have their lives to live, to breathe, to see, touch and those things are priceless. And that’s what I value about everything that I’ve been through.”