The Knights of Columbus are doing their best to keep Jesus as the focus of Christmas season, through a nationwide program called “Keeping Christ in Christmas.” 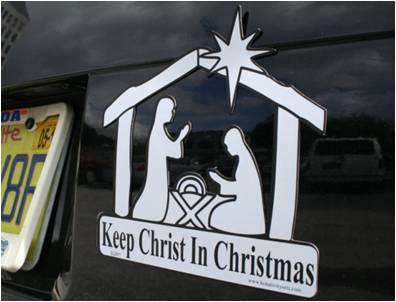 The Knights of Columbus are doing their best to keep Jesus as the focus of Christmas season, through a nationwide program called “Keeping Christ in Christmas.”

The Knights have asked that their councils around the U.S. take part in several programs leading up to Christ’s birth. They have released posters, asked members to give the gifts of service and time – by preparing meals at a soup kitchen or sending Christmas presents to people in the hospital. They are also distributing public service announcements. Councils and members are urged to sell magnets and stickers with the phrase “Keep Christ in Christmas.”

Around the Diocese of Orlando, Knights of Columbus councils are incorporating these items into their efforts, while striving to keep Christ in Christmas in additional ways.

Bill Mazanec, the publicity director at Council 2112 in Orlando, said his council helps the Beta House and Catholic Charities year-round, but increases its donations during the Christmas season. Council 2112, which includes five parishes in eastern Orlando, Winter Park and Oviedo, also displays a sign that reads “Keep Christ in Christmas” near a Catholic Charities location.

“It’s really just that public billboard, of having these available in December and January,” said Bill Mazanec. “From our council, we want to wish people a Merry Christmas. We try to keep that in the front of our minds.”

Council 14222 in Summerfield, associated with St. Mark the Evangelist Parish, is one of several councils selling car magnets with the “Keep Christ in Christmas” logo. Tom Rueck, the council’s community director, said the council also sold more than 600 “Jesus is the Reason for the Season” signs. Proceeds are going to the Alpha Center for women in Ocala.

Other local councils are putting an emphasis on family, stressing that Christmas is a time to spend more time with loved ones, and life issues, including donating money and time to pro-life causes.

The Knights of Columbus are conducting an awareness campaign to Keep Christ in Christmas. They have produced public service announcements with the simple message of the meaning of Christmas. The celebration of the birth of Christ is reinforced in the PSAs. They simply ask listeners to think about others this Christmas and to remember that often the best presents cannot be wrapped.