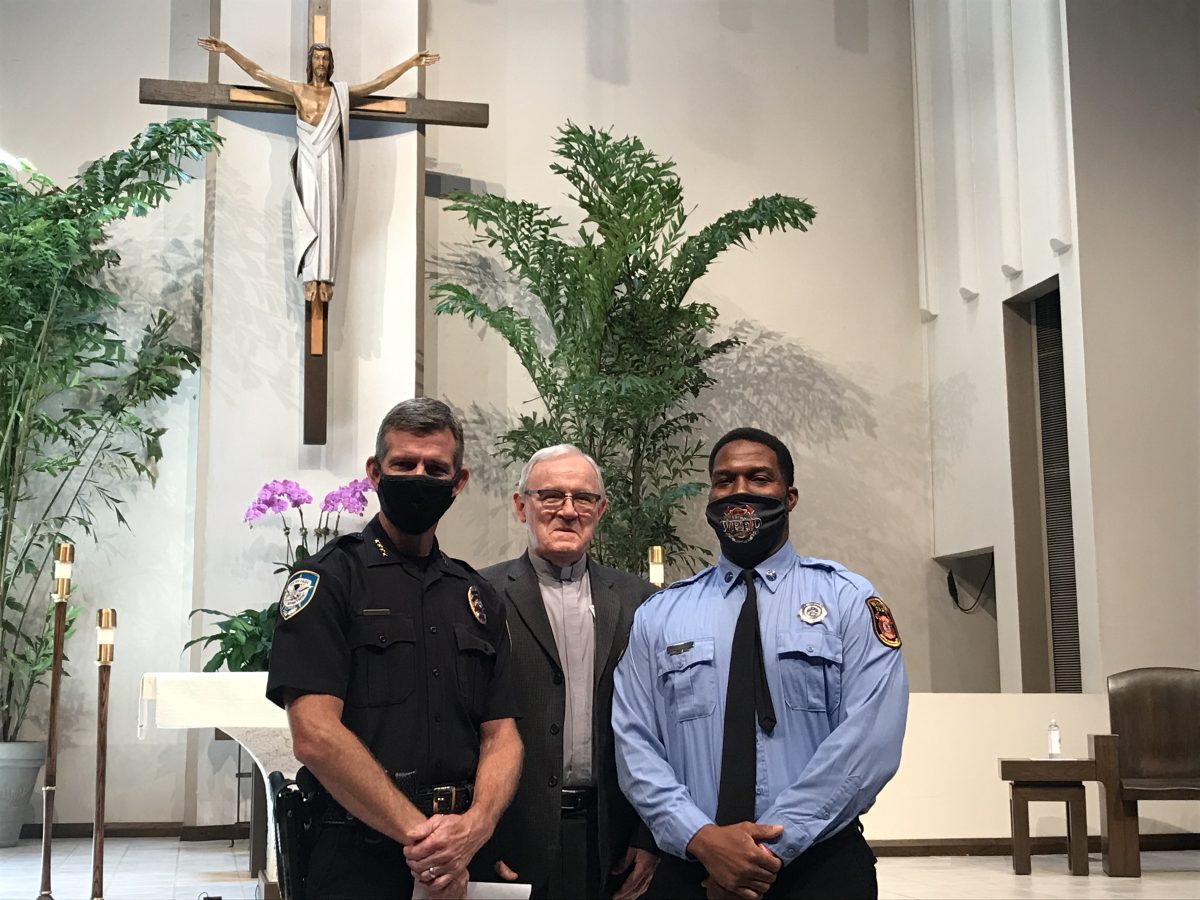 WINTER PARK  |  Winter Park leaders and Christian elders and clergy gathered for an Hour of Power to pray for unity at St. Margaret Mary Parish June 19, 2020, with the theme “We Are One.”

Msgr. Richard Walsh, pastor of the Winter Park parish, was the last of eight Christian leaders to speak on actions required to achieve unity. He is a longtime advocate for equality and works locally, nationally and abroad to help peoples of all races come together and be raised up as children of God.

“St. Margaret Mary has worked to build relationships with many ethnic and religious groups in the area, i.e. Thanksgiving stores, Christmas stores, and the program referred to as Bridging the Color Divide,” Msgr. Walsh said. 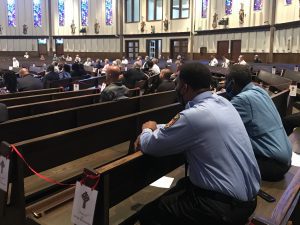 His work with Bridging the Color Divide, a community-wide effort to bring about compassion and understanding between blacks and whites, is one of the reasons Winter Park Fire Inspector Ed Mitchell asked Msgr. Walsh for his participation. Mitchell coordinated the prayer hour and St. Margaret Mary provided a central location where Christian leaders could meet, facilitating the ability to easily socially distance guests. Mitchell invited a little over 50 Christian leaders.

“It starts with the Church. The word in 2 Chronicles 7:14 says, ‘If my people who are called by my name will humble themselves, seek my faith and turn from their wicked ways, then I will hear from heaven, forgive their sins and heal the land.’ So it starts with the Church,” Mitchell said. “By us coming together, He’s in the midst of our prayers. We are the foundation so it starts with us. We have to be of one accord before anybody else can be of one accord.”

Explaining how his idea came to fruition, Mitchell noted, “Everything that’s going on in the world, so much hatred and division – the Lord laid it on my heart to go and have a conversation with my friend, Chief (Michael) Deal.” The Winter Park police chief asked him how they could do something positive, “without having a mass gathering, making sure there are no out of order disruptions from the outside.” After much thought and prayer, Mitchell’s response was, “How about having an hour of power prayer and bring both sides of the track together — the east side of Winter Park and the west side — because there is a train track, which is the color divide in our city?” 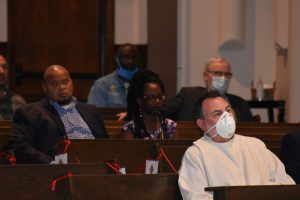 The train track division was obvious to the inspector his first day on the job eight years ago, and he noted it still marks a division in Winter Park, “even in the church.” “There are no black pastors on the east side and no white pastors on the west side.” When he prayed about it, he said he knew the gathering had to bring clergy together “because in Christ there is no color.”

When the date, June 19, arose as an option, Mitchell said he felt it was “a divine set up by God.” June 19, also known as Juneteenth, celebrates the emancipation of slaves in 1865. Mitchell said the date made sense, “With June 19th being available and us being in Christ.” He noted, “We’re all free from slavery in Christ.” The date also acknowledged, “freedom for, not only black people, but all those who receive Christ are free from their slavery.”

In his address on unity, Msgr. Walsh reiterated this point, and quoted from Luke 4:18, which speaks of Jesus’ mission. “‘The Spirit of the Lord is upon me because He has anointed me to bring glad tidings to the poor. He has sent me to proclaim liberty to captives and recovery of sight to the blind and to let the oppressed go free,’” Msgr. Walsh read. “Jesus was faithful to his mission during his sojourn among us. He dealt with and assisted all kinds of people; the blind, the lame, prostitutes, tax collectors, etc. … (T)he ministry of Jesus himself reminds us that human life is sacred and has a special dignity. They (Gospel writers) lead us to believe that every person is precious, that people are more important than things and that the measure of any institution is whether it threatens or enhances the life and dignity of the human person.” 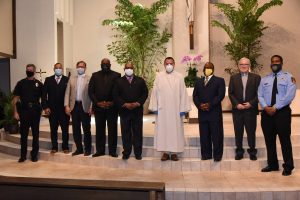 Msgr. Walsh’s words brought home the theme, “We Are One” referring to Ephesians 4:4-6. He said, “I believe that if we ever hope to have a viable Christian community, the foundation stone on which it is based is the dignity, the value and the uniqueness of each and every person in it.”

In the event invitation, Police Chief Michael Deal said he hoped attendance at the service would “be the beginning of healing, communication and rebuilding towards a more unified America.” The letter addressed leaders saying, “It is the hope that as the cornerstone of this community, you can encourage others to follow by leaning on the unchanging word.”

Just before the prayer service, Chief Deal told the Florida Catholic, “We have a great community here and a community that supports this police department. This is just another example of this community and how we work together and pray together,” he said.

Each religious leader spoke on his assigned topic — love, confession, forgiveness, repentance, healing, restoration, peace and unity. Msgr. Walsh was assigned the topic of unity. He said Scripture-based actions indicate how one depends on the other, which leads to unification. He prayed that God help those assembled to work in harmony and be strengthened by his grace.