Leaning on faith while defending freedom 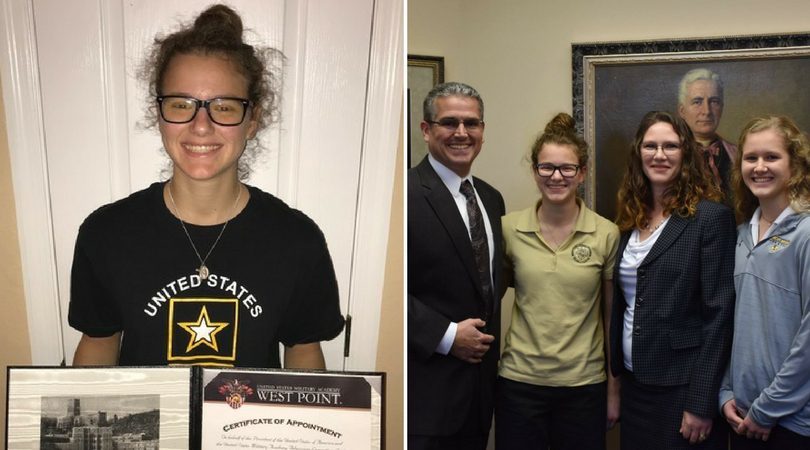 The next elite American soldier may be a determined, faith-filled young woman from Bishop Moore Catholic High School. Veronica beams holding up her brand new Certificate of Appointment to West Point Academy, her United States Army t-shirt peeking out from behind the frame.

Her mother, Wendy, says Veronica has always been outdoorsy and adventurous, captivated by patriotic parades and men and women in uniform. While West Point was not always her dream, her family believes Veronica felt it within reach when she saw a fellow classmate accepted to the exclusive military school.

The family also admits when Veronica first revealed her plans a few years ago, they were initially shocked. Growing up in rural Vermont, Veronica had the opportunity to meet a number of soldiers. She sadly became familiar with their sacrifices as well. A member of her parish community died while serving in the Iraq War. Mom explained, “I remember her asking me “You know I want to serve, right?” and I replied “Serve what?” When Wendy finally realized what Veronica was asking, she quickly gave her full support. “I believe that it is the greatest gift to be willing to serve and lay down your life for another,” Wendy shared.

Veronica plans to lean on her faith while becoming a defender of freedom. It’s something she’s been doing for years now. Veronica has travelled to the Dominican Republic to teach students English. She’s a volunteer catechist at St. James Cathedral and she is committed to community events like feeding the homeless.

“It is my dream to take the life of service and stewardship that I have learned to live as a Catholic disciple and apply it to a career of service for my country,” Veronica explained. “I wish to take the organizational skills, leadership, and life of stewardship that I have developed here at the Cathedral and Bishop Moore and apply that to a broader scale. As a West Point Cadet, I would be a representation of what the Catholic Church stands for in serving others.”

U.S. Congressman Darren Soto (D-FL-09) called Veronica personally to congratulate her on making the cut for West Point. “I am impressed and very proud of Veronica for all of her accomplishments,” stated Soto. “Her academic record, leadership and service to the community led to this well-deserved appointment. Also, special thanks to all the faculty and staff at Bishop Moore Catholic High School for your work in developing Florida’s next generation of leaders.”

By Jennifer Drow, special to the Florida Catholic – February 1, 2018