Lenten Retreat Calls Young Adults to Return to the Lord 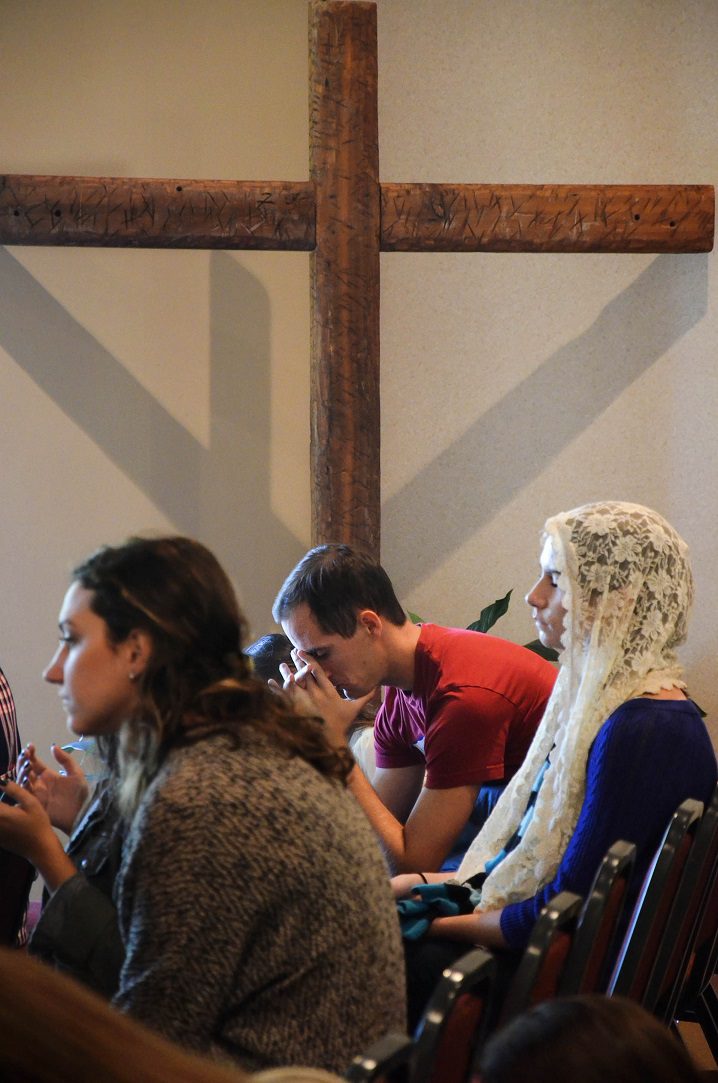 Young adults pray during a young adult retreat in Dec. 2016. The office of youth ministry provides several retreat opportunities for young adults throughout the year, including “Return to Me”, an Lenten retreat held on March 9 at San Pedro Center, to help young adult incorporate their faith into their life decisions. (ANDREA NAVARRO | FC)

On March 9, 50 young adults from around the Diocese of Orlando came together for a Lenten retreat called “Return to Me,” focused on coming back to God. The retreat featured speakers, workshops and prayer geared toward young adults at the San Pedro Spiritual Development Center in Winter Park.

“Young adults are in a time in their faith where they are making decisions in their life,” said Kimmy Zeiler, director of youth ministry for the Diocese of Orlando. “Events like this allow them to do that while incorporating their faith.”

Valeria Mercado Ramos, from St. Isaac Jogues Parish in Orlando, decided to attend because she resonated with the theme of “Return to Me,” especially during the Lenten season.

“God wants us to come back to Him not matter what we’ve done,” Mercado Ramos said. “The other side without Jesus is miserable, so it’s better coming back.”

Father Torres, the vocations director for the diocese and the retreat’s keynote speaker, spoke about turning back to Christ with our hearts fixed on Him.

“When is the last time you allowed yourself to be carried by Jesus?” he asked. “The most fruitful human activity is to receive God. That means you’re receiving heaven. That if I die in the next heartbeat, I can go with Him, but it also means that He is going to guide me through anything. Allow yourself to receive God, and that alone will transform the universe.”

Father Torres said we sometimes allow work, money or a person to take the place of God, but we have to walk toward God instead.

“God will strengthen a person’s humanity. He’s not going to ask me to do something impossible for me to do today. There’s going to be a transition time, and it’s good to be gentle with ourselves,” he said. “You don’t have to become a saint today, and as long as I let Jesus carry me through, he will make me a saint.”

Following Father Torres’ talk, there was a workshop reflecting on the parable of the Prodigal Son.

Carlos Palacio, who attends Most Precious Blood Parish in Oviedo, related to the prodigal son and saw the father as Jesus.

“We get comfortable in the wasteland, and the devil is adding dry wood to the fire and saying, don’t even think about going back,” Palacio said. “Once you go to Confession, God takes it all away and carries you. I love that He brought me back in this Lenten season.”

Derek Saldanha, a seminarian for the Diocese of Orlando, presented another workshop and spoke about the temptations of Jesus in the desert and the importance of not allowing ourselves to remain in the wasteland.

“Jesus emptied himself and took on solidarity so even we can overcome temptation, even in our own humanity,” Saldanha said. “How many times does the devil distract us from God’s will?”

Saldanha said it’s important to resist the devil and to use the tools given to us such as scripture, prayer and trust in the Lord. In Baptism and Confirmation we receive the Holy Spirit and the gifts of wisdom, knowledge, understanding, good counsel, fortitude, piety and the fear of the Lord.

“The Holy Spirit leads us along the path of Salvation. We need to call upon the Holy Spirit who is ready to lead us right here and right now to show us the way to the Father,” he said.  “Satan always breaks up relationships. He doesn’t like strong ministries. He doesn’t like strong families. We need to make sure he doesn’t destroy our good relationships with our brothers and sisters and certainly not our relationship we have with God.”

Patrick Schuerger from Florida Southern College who heard about the retreat through his prayer group “School of Humanity” said he got a lot out of Saldahna’s talk about resisting the devil.

“I really liked Derek’s talk about being grounded in truth and confronting the lies of the devil with the truth through scripture,” he said. “The devil doesn’t want me to go back to the Lord, who will break your tired, your hurt and your pain.”