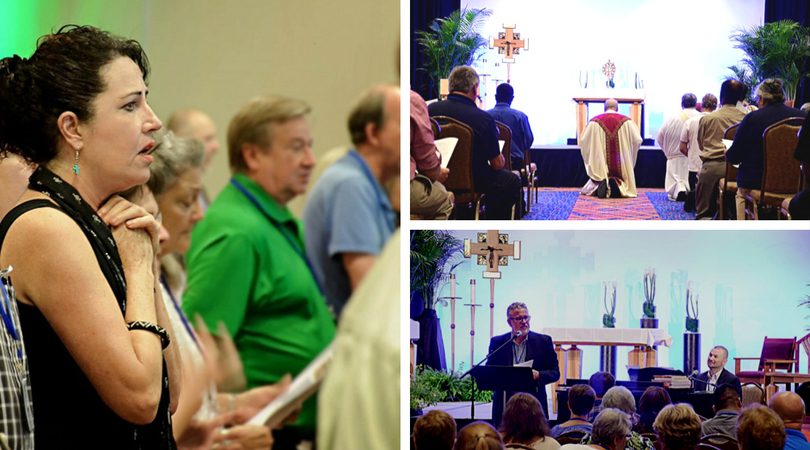 By Glenda Meekins of the Florida Catholic staff – August 30, 2017

ORLANDO | The Orlando Liturgical Conference gathered more than 600 people eager to learn about encountering Christ more deeply through the liturgy. Held August 24-26, this year’s theme, “Liturgy in Action: Encountering Christ”, focused on how clergy and lay persons can accompany one another into this encounter through liturgical practices that allow for and encourage full participation and union with Christ. Topics ranged from a comprehensive look at each aspect of the Mass to how to move the congregation to an active and intimate encounter, to meeting Christ in song and prayer.

Bishop Mark Seitz of the Diocese of El Paso, Texas brought the message to heart when he spoke of the proclamation of the Word. He urged lectors and clergy to prepare such that, “in a certain way, the Word has become part of you…. Allowing that Word to seep into your heart and then proclaim it as though it’s your Word… You’re going to proclaim it beautifully if you own it,” he said. “This is a personal exchange—the personal encounter with the Word of God.”

Other workshops offered participants insight into how their ministry is a tool for that encounter. Natalie Tilus of St. Catherine of Siena Parish in Kissimmee attended the conference for the second year. Tilus, who is deeply involved in her parish music ministry said, “I’ve always thought of music ministry as a support to the liturgy, but a lot of the workshops I’ve attended have made me realize it’s just as integral a part as everything else in the Mass. I always say that music is the last chance for people to get the message of the liturgy, so this reminds me that the music has to draw people into the liturgy and bring people to encounter Christ… It seems like such an obvious thing, but we forget.” She added, “We think we’re just picking music or we’re just a choir. But we are part of this encounter. So everything we do as music ministers during Mass is either pushing people toward that encounter or pulling them away.”

The action of attraction or distraction goes beyond the encounter with Christ. As Rita Thiron, executive director of the Federation of Diocesan Liturgical Commissions in Washington, D.C., points out, it also has an effect on our encounter with one another.

For Thiron, understanding the Communion Rite holds the key to our communal identity. She explained, “We reverently approach the Lord. We receive the Lord and we go back to our pew and we kneel down and we thank Jesus for being inside of us. That’s what we’ve been taught since our First Communion. However, we need to go back and open our eyes that Jesus is coming to that guy over there that doesn’t like me and to that woman over there that just found out she has cancer and to that little girl that just made her Communion and to that couple over there that are having trouble with their marriage. It is not a Jesus and me moment. It’s a Jesus and us moment and we’re called to be, not only closer to Him, but closer to each other in Communion. That’s why we call it Communion.”

It is through this communion that the liturgy affirms and empowers us to accompany one another, beyond the doors of the Church. Thiron said, “If we would only take seriously the Communion Rite and the prayer after Communion, and really look at how communion with the Lord has formed us and how the prayer after Communion reminds us of the fruit of that communion—then and only then can we take seriously the dismissal rite which tells us to go. It doesn’t tell us to leave. It doesn’t tell us time is up. It tells us to go out and do something about it.

This understanding of belonging to one another, the Body of Christ, is a fruit of our personal encounter with Jesus Christ. For Tilus, understanding that the music is for the assembly, drove home that “we are the Body of Christ.” As we accompany one another and encounter Christ, Tilus says it becomes “a continuous process. You have something, then you give it and share it, and help them give and share in return.” And thus, the living encounter moves from the liturgy to the world around us.