Liturgy of the Hours: The prayer of the Church 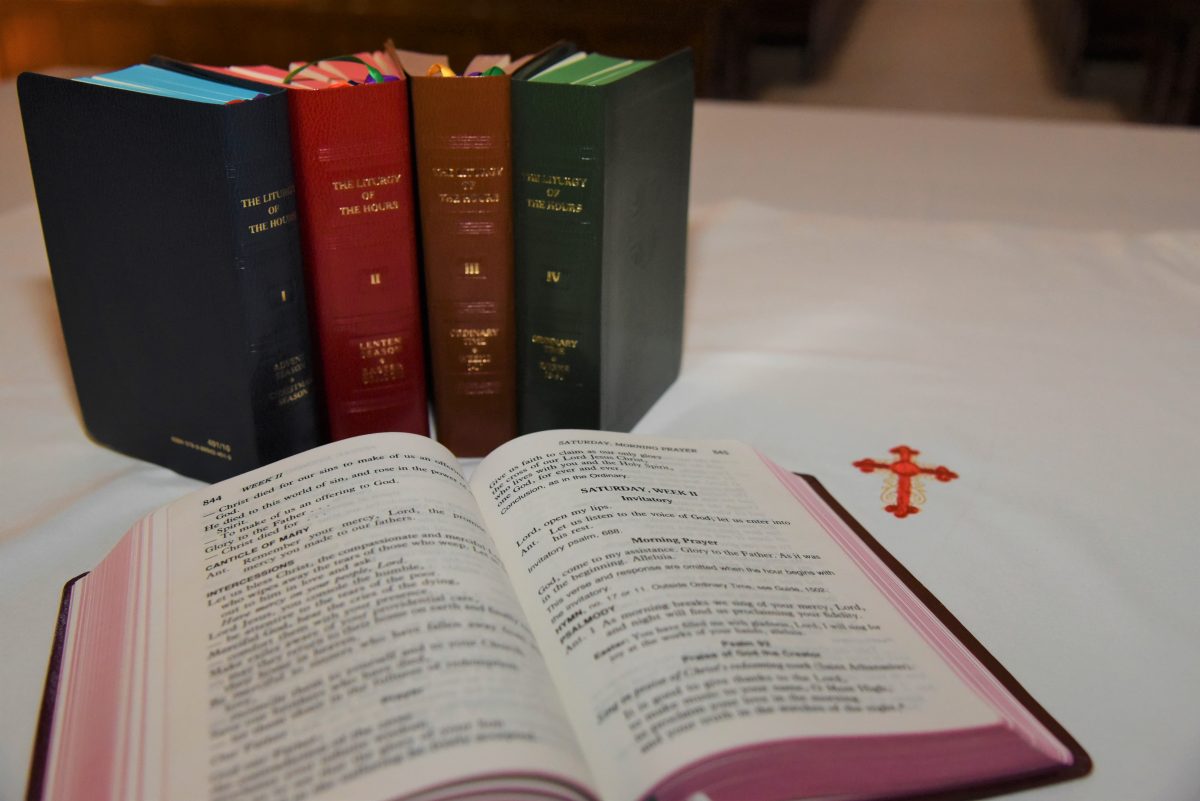 OCALA | Every morning, a little after 8 a.m., a group of parishioners at Our Lady of the Springs Parish in Ocala quietly gather with their parish clergy to pray the Liturgy of the Hours, also known as the Divine Office or canonical prayer. They join millions throughout the world in this universal prayer of the Church.

The combination of prayers, hymns, and Scripture dates to the Old Testament psalms, 150 prayers offered throughout the day at various hours. As Christianity spread, the tradition continued. The Apostles observed the Jewish custom of praying at the third, sixth, and ninth hours, and at midnight (Acts 10:3, 9; 16:25). By the fourth century, after Constantine declared Christianity the official religion, the faithful embraced their new freedom to join in community – praying the morning and evening psalms.

Order of Discalced Carmelites Father Justin Kannamparabil-Vakko serves Our Lady of the Springs in Ocala as pastor and enjoys praying in community. His parish began the tradition 26 years ago when Kay McCall offered to lead the prayer before daily Mass. Five years ago, Father Vakko took initiative to “do it with the people.” He said, “To me, it is more meaningful and relevant to the parish.” Priests, deacons and religious are bound to pray the Divine Office, but uniting with laity in the prayer, “is something very special and unique,” he said.

Desert monks embraced the Jewish practice early on, developing the monastic office, which added morning, mid-day, and night prayer. The people’s office invoked by laity remained close to the original Jewish tradition. Eventually fewer lay men and women participated and it became associated solely with the monks and clergy. In 2000, St. Pope John Paul II infused new life into the liturgy with his Apostolic Letter, Novo Millennio Inuente—encouraging renewed participation by the laity. He asked that greater pastoral care be devoted to “promoting the Liturgy of the Hours as the prayer of the whole people of God.”

Robert Sessler has been faithful to Morning Prayer for three years at Epiphany Parish in Port Orange. “The prayers, especially the psalms, are so beautiful. So many of them are expressive of my own feelings and thoughts at different times,” he said. “Most of them are just praising God and thanking him, but even when I’m in low spirits, we have psalms for that too, to encourage.” His words echo those of St. Ambrose who referred to the Divine Office as “a complete gymnasium for the soul.” Like Sessler, he appreciated the richness of its range and its ability to help one turn their mind to God throughout the day. St. Ambrose noted, “A psalm is a blessing on the lips of the people, a hymn in praise of God…It is a source of security at night, a lesson in wisdom by day. It is a shield when we are afraid, a celebration of holiness, a vision of serenity, a promise of peace and harmony, a confession of faith in song. It soothes the temper, distracts from care, and lightens the burden of sorrow.”

Often sung, the prayer enables the faithful to “pray without ceasing” (1 Thess. 5:17) as Saint Paul commissioned. Father John Bosco Maison, Epiphany’s pastor agrees. “It is a prayer that is so beautiful, so loving. It also helps me to prepare my mind and my heart to use His words to encourage my parishioners who are in need… It is a joy to have a conversation with Him. He talks to me; I talk to Him. I go through the day with that thought.”

Father Miguel González, rector of St. James Cathedral says the prayer “sustains” him. “It is our bride because we made a vow that we would pray daily for the Church, in union with the Holy Father, and all priests around the world and the entire Church. It is that bond, that coming together that we are able to receive when we pray our Liturgy of the Hours.”

Yet the practice is not a simple one. Verna Walsh recalls arriving at daily Mass at Our Lady of the Springs early one morning as Morning Prayer was in progress. “I’d never heard of it before. I was really mixed up with how they were doing it. I couldn’t keep up with it. When I caught on, I thought, this is wonderful. It gave me the best feeling. It made my day.”

Suzanne Hall had a similar experience. She came across the prayer “by default” she said, also discovering it after arriving early. It took her some time to learn the order of the prayers and where they were found. Once she did, she loved it. “It is just the best kick start of a morning for a Catholic and to know that not only are we praying at our parish in Ocala, but throughout the entire world others, just like us, are doing the same exact prayer is so encouraging,” she said. Two years ago she began leading the small group at Our Lady of the Springs. She is always on the lookout for new faces, welcoming them and announcing the prayer. At least once per year, her parish offers a workshop to learn it. Copies of the Book of Christian Prayer, an abridged version of the four volumes, are readily on hand to help anyone who needs it.

According to the United States Council of Catholic Bishops, “In the Hours, the royal priesthood of the baptized is exercised, and this sacrifice of praise is thus connected to the sacrifice of the Eucharist, both preparing for and flowing from the Mass.” The General Instructions on the Liturgy of the Hours goes on to state, “By offering praise to God in the Hours, the Church joins in singing that canticle of praise which is sung throughout all ages in the halls of heaven (16).”

In the words of Psalm 95, “Come let us sing to the Lord and shout with joy to the rock who saves us.”