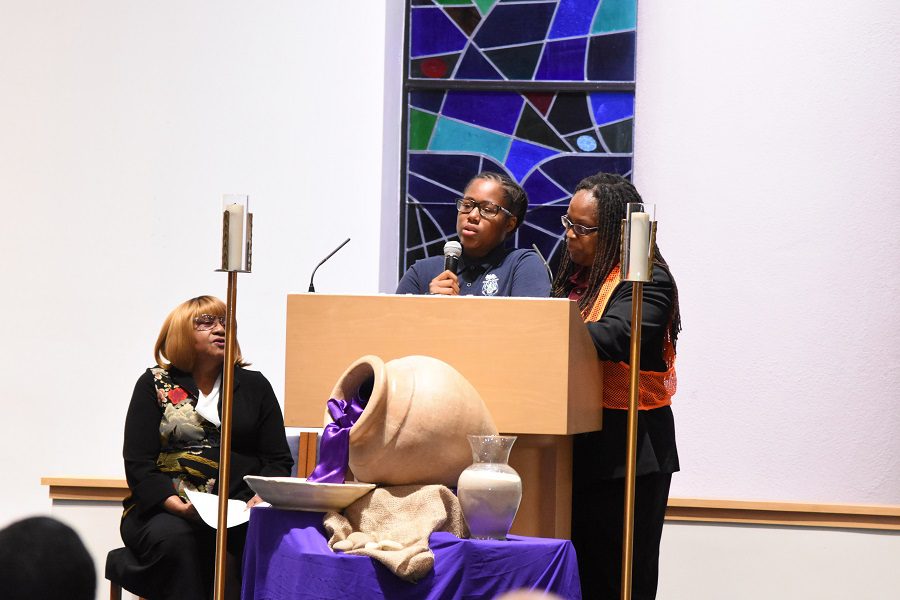 Jeanette Lewis (right) console her granddaughter Tatyana as she shares her story of homelessness at the P.E.A.C.E. Nehemiah Action meeting at Resurrection Parish, Lakeland. (GLENDA MEEKINS)

LAKELAND/DAYTONA BEACH | An alarming number of families throughout the United States are finding themselves homeless due to lack of affordable housing. This was the spotlight issue for two major social justice rallies, Polk Ecumenical Action Council for Empowerment (P.E.A.C.E.) in Lakeland and Fighting Against Injustice Towards Harmony (F.A.I.T.H.) in Daytona Beach. Both groups are ecumenical organizations made up of people of all faiths who fight for the dignity of each person.

Both entities held their Nehemiah Action, an annual assembly where their agenda is set, in April. Public officials were invited to commit to changes designed to improve the welfare of their communities.

In a moving testimony, eighth-grader, Tatyana A., tearfully revealed her family became homeless when she was 9 years old. Her mother needed extra time off work to recover from a difficult birth and lost her job. The family of eight shared one hotel room. If they had no money, they slept in the car. “Sometimes it was really hard because mom had to turn off the air conditioning because of lack of gas. Everyone was always crying and food was always costly,” she said as she broke into sobs. She remembered nights sleeping on the floor or sharing a bed. Her mother applied for Section 8, a federally-funded housing program. They were 538th on the list and moved up to 150 in five years. They now live with another homeless family in a four bedroom house with 13 people.

“For the last five years, I’ve tried to be strong for my brothers and sisters because I always wanted to be someone they looked up to,” said Tatyana. She dreams of attending Julliard School in New York or becoming a doctor. “I want to make something of myself,” she said. “I want to help with the situation of housing because there are other kids like me who are really frustrated and can’t do anything. They’re hurt and ashamed.” The teenager is part of a community service project that helps homeless children get more exercise. When she heard that her grandmother is part of P.E.A.C.E., it gave Tatyana hope for change.

In the encyclical, Amoris Laetitia, Pope Francis notes, “The lack of dignified or affordable housing often leads to the postponement of formal relationships. It should be kept in mind that ‘the family has the right to decent housing, fitting for family life and commensurate to the number of the members, in a physical environment that provides the basic services for the life of the family and community’” (Amoris Laetitia, 44). The idea is fundamental to Catholic Social Teaching and the dignity of the human person.

There are approximately 4,000 homeless children in Polk County. According to the National Low Income Housing Coalition, a parent must work full-time and make $21.37 per hour to afford a three-bedroom apartment. P.E.A.C.E. asked commissioners and mayors of Lakeland and Winter Haven to finalize and approve strategic plans for their respective cities that will add 500 new units in Lakeland and 150 in Winter Haven for families with identified homeless children by 2023. All agreed.

On April 8, F.A.I.T.H. tackled the same issue. Their research revealed the average renter household in Volusia County cannot afford to pay more than $653 per month and 21,000 renters (households) in the county pay more than half of their income in rent. The Florida Housing gap study also indicates Volusia County falls short of affordable units by more than 16,000.

Mayor Derrick Henry and Commissioners Paula Reed and Quanita May attended the meeting and agreed to work toward a solution. Volusia County Council members, Heather Post, Barbara Girtman and Billie Wheeler, committed to support the creation of a countywide Affordable Housing Fund to help those earning less than 50% of the area’s median income.

On the subject of implementing restorative practices in schools as an option, rather than school suspension, F.A.I.T.H. was also successful. Elected officials agreed to implement a plan to reduce school suspensions by 50 % by 2022 and to expand restorative practice to all elementary, middle and high schools by 2023. Florida has the highest suspension rate in the nation, fueling what has been dubbed “the school to prison pipeline.”

Restorative practices focus on problem-solving and dealing with the root causes of misbehavior and making amends. Evidence shows a correlation between school suspension and arrest rates. Studies by the Florida Department of Juvenile Justice and Civil Rights Data Collection reveal, out of the 67 counties in the state, Volusia ranks fifth highest in suspensions and seventh highest in school arrests. It ranks 57th in graduation rates.

“Many schools around the country are adopting (restorative practices) into their discipline policies,” said Father Chris Hoffmann, pastor of Our Lady of Hope Parish in Port Orange. “It’s better for children and better for teachers. However, it requires a complete culture change in the school system. Since our action last year, our district has expanded the use of restorative practices to seven middle and two elementary schools.” They are still working to reduce suspension rates.

P.E.A.C.E. continues to fight for the plight of the mentally ill in prison and on the streets. They hope to gain commitment for the creation of a written plan to increase access to integrated behavioral health no later than April 2020 at the five Federally Qualified Health Centers in Polk County. The effort would facilitate access to mental healthcare when offered in conjunction with primary care.

If you are interested in learning more about these advocacy groups, contact Deborah Shearer at Catholic Charities of Central Florida, 407-658-1084.