Thomas Equels has dedicated much of his life to working with the poor and providing services to the Catholic Church. On March 18, he was honored with one of the highest awards given by the Holy See. 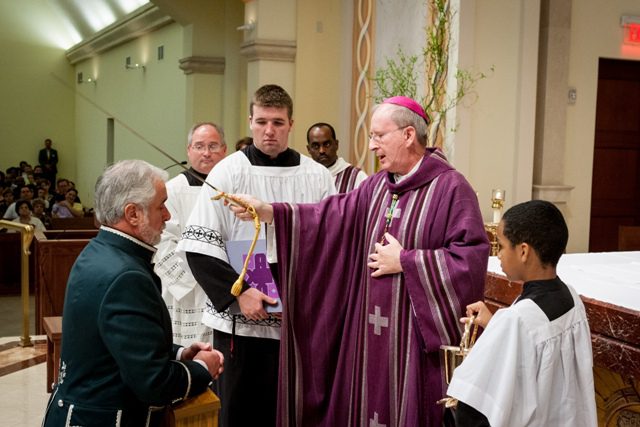 Thomas Equels has dedicated much of his life to working with the poor and providing services to the Catholic Church. On March 18, he was honored with one of the highest awards given by the Holy See.

Following the homily during the 10:30 a.m. Mass at St. James Cathedral, Bishop John Noonan presented Equels with a certificate, in which Pope Benedict XVI recognized and assigned Equels “faculties for all of the privileges which are joined with this dignity.” Bishop Noonan then pinned an eight-pointed cross onto Equels’ suit. The insignia of the Order bears the image of St. Gregory and the motto “Pro Deo et Principe,” which is Latin for “For God and Prince.” Bishop Noonan then installed Equels as a knight with a sword.

“His resume is full of the many ways in which he practices the virtue of religion through adoration, prayer and sacrifice, having been recognized by his peers in the legal field and in Catholic circles for his use of God’s gifts to build the Kingdom of God on this Earth,” Bishop Noonan said.

Equels is the president and managing director of Equels Law Firm, which has offices in Orlando, Miami and Tallahassee. After graduating from law school, he began working on cases involving Haitian immigrants in the early 1980s in Miami. Soon after, he befriended a young priest, now Archbishop Thomas Wenski, who had established a Haitian mission in Miami.

Equels became Catholic in 1983, and quickly became involved in parish life. He served on the council at St. Hugh Parish in Miami and pastoral council for the Archdiocese of Miami, and was the president of the Catholic Lawyers Guild in Miami, which set up legal clinics for the poor and various outreach programs in the Miami area.

He opened his Orlando office in 1995, and began spending more time in Central Florida. During the week, he participates in the celebration of Mass at St. James Cathedral. He also assists with parish projects, and is the Chairman of the Real Estate Commission for the Diocese of Orlando.

Equels was only the 12th person in the Diocese of Orlando to be presented the award, which he said he was honored and humbled to receive.

“In the course of our lives, we are able to grow spiritually, emotionally and intellectually,” Equels said. “I’ve tried to make every day of my life a day where I am a little bit better in those departments. One thing about this award that is important to me is that it helps me to focus on having another opportunity to serve.”

In addition to serving on numerous boards and committees in the Diocese of Orlando, Equels also has a love for art, and uses his talent to paint images of Jesus, the Blessed Virgin Mary and other Biblical figures. He began painting in 1995, and his images are found in numerous churches in Florida, including Notre Dame d’Haiti in Miami, Our Lady of Fatima Mission church in Orlando and St. Theresa Parish in Belleview.

As a pilot in the Vietnam War, Equels was awarded two Distinguished Flying Crosses, the Bronze Star, 15 Air Medals and the Purple Heart. He is married to Laura – who became a Lady of St. Gregory during the ceremony – and has five adult children.