The Holy Father received the final group from the United States Conference of Catholic Bishops, whose prelates have been travelling to Rome over the past six months on their quinquennial “ad limina Apostolorum” visits. 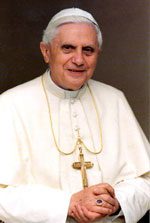 The Holy Father received the final group from the United States Conference of Catholic Bishops, whose prelates have been travelling to Rome over the past six months on their quinquennial “ad limina Apostolorum” visits.

In previous meetings, different groups of bishops emphasized the importance of preserving and fostering the gift of Catholic unity as an essential condition for the fulfilment of the Church’s mission in their country. Responding to this concern, Benedict XVI focused his address this morning on the need to incorporate the rich patrimony of faith and culture contributed by the many Catholic immigrants into the Church in America.

The Pope began by praising the work carried out by the Church in America, to respond to the phenomenon of immigration: “The Catholic community in the United States continues, with great generosity, to welcome waves of new immigrants, to provide them with pastoral care and charitable assistance, and to support ways of regularizing their situation, especially with regard to the unification of families. A particular sign of this is the long-standing commitment of the American Bishops to immigration reform. … It is … of profound concern to the Church, since it involves ensuring the just treatment and the defense of the human dignity of immigrants”.

The Church in America, the Pope said to the bishops, “is called to embrace, incorporate and cultivate the rich patrimony of faith and culture present in America’s many immigrant groups, including … the swelling numbers of Hispanic, Asian and African Catholics. The demanding pastoral task of fostering a communion of cultures within your local churches must be considered of particular importance in the exercise of your ministry at the service of unity. This diaconia of communion entails more than simply respecting linguistic diversity, promoting sound traditions, and providing much-needed social programs and services. It also calls for a commitment to ongoing preaching, catechesis and pastoral activity aimed at inspiring in all the faithful a deeper sense of their communion in the apostolic faith and their responsibility for the Church’s mission in the United States. … the immense promise and the vibrant energies of a new generation of Catholics are waiting to be tapped for the renewal of the Church’s life and the rebuilding of the fabric of American society”.

In this context, Benedict XVI emphasized the role of the consecrated life: “The urgent need in our own time for credible and attractive witnesses to the redemptive and transformative power of the Gospel makes it essential to recapture a sense of the sublime dignity and beauty of the consecrated life”. We must, therefore, “pray for religious vocations and promote them actively, while strengthening existing channels for communication and cooperation” present in each diocese.

In conclusion, the Pope expressed his hope that the Year of Faith, which will begin in October, “will awaken a desire on the part of the entire Catholic community in America to reappropriate with joy and gratitude the priceless treasure of our faith. With the progressive weakening of traditional Christian values, and the threat of a season in which our fidelity to the Gospel may cost us dearly, the truth of Christ needs not only to be understood, articulated, and defended, but to be proposed joyfully and confidently as the key to authentic human fulfillment and to the welfare of society as a whole”.