More than three million women and children are slaves today. 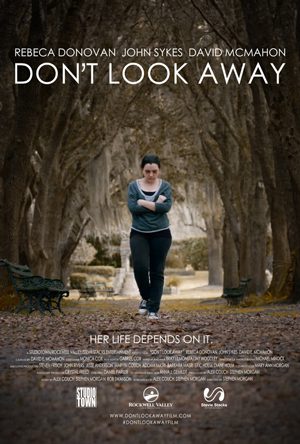 More than three million women and children are slaves today. In the dramatic narrative film, “Don’t Look Away,” the subject of sex trafficking—modern day slavery—is exposed to help people understand the truth of this tragedy. Exploring the all-too-common story of a young woman enslaved through tactics exploiting social networks, “Don’t Look Away” exposes the fertile hunting ground stalked by predators in the human trafficking trade.

“People think it’s a third world problem,” explained director Stephen Morgan, “but human trafficking is everywhere and thriving here in America. The point of the film is to help bring to light the dangers that are not only in the shadows, but among us.”

The producers of the film held a premiere of the film during a private screening on March 14 at the Enzian Theatre in Maitland. Approximately 300 people were on hand for the viewing including Bishop John Noonan and other religious leaders, law enforcement officials and other advocates in the fight against human trafficking.

“It is a tragedy that Florida has one of the highest instances of human trafficking in the country,” said Bishop Noonan. “Unfortunately in our culture today predators have the means of getting at young people who are vulnerable. Our families are so isolated from each other and minors look at these strangers as friends and are led in all sorts of directions. It’s an issue every parent should have a conversation with their children about.”

Two of the film’s financial supporters are Eric and Diane Holm, owners of Metro Corral Partners, a 27-unit Golden Corral franchisee with operations in Florida and Georgia. They are both parishioners of St. Margaret Mary Parish in Winter Park and Eric is a member of the Catholic Foundation of Central Florida board of directors.

“Several years ago Eric and I had an opportunity to assist the Salvation Army with this problem at the local women’s shelter,” said Diane Holm. “It has always weighed heavy on our hearts but like so many people we did not know what we could do to help with this epidemic. Hopefully we can help educate our friends and neighbors how critical it is for us all to help, not only in prevention but also to help already abused children who are victims.”

“Don’t Look Away” was filmed on location in Central Florida and Jacksonville. The company consisted of over 20 crew members, 9 principal cast members and dozens of extras. “Don’t Look Away” is a not for profit project and will be used by organizations around the country to raise awareness and aid in risk reduction and prevention.

To request a screening and to watch the movie trailer, visit http://www.dontlookawayfilm.com/.

The Diocese of Orlando has a Human Trafficking Task Force which is coordinated by Deacon David Gray. The Task Force provides awareness and understanding of the issues surrounding human trafficking, and tools and resources to educate Church families and the community. The Task Force collaborates with government and community partners to encourage action to protect victims and prevent abuse.

Here is a listing of upcoming Human Trafficking Awareness Sessions: