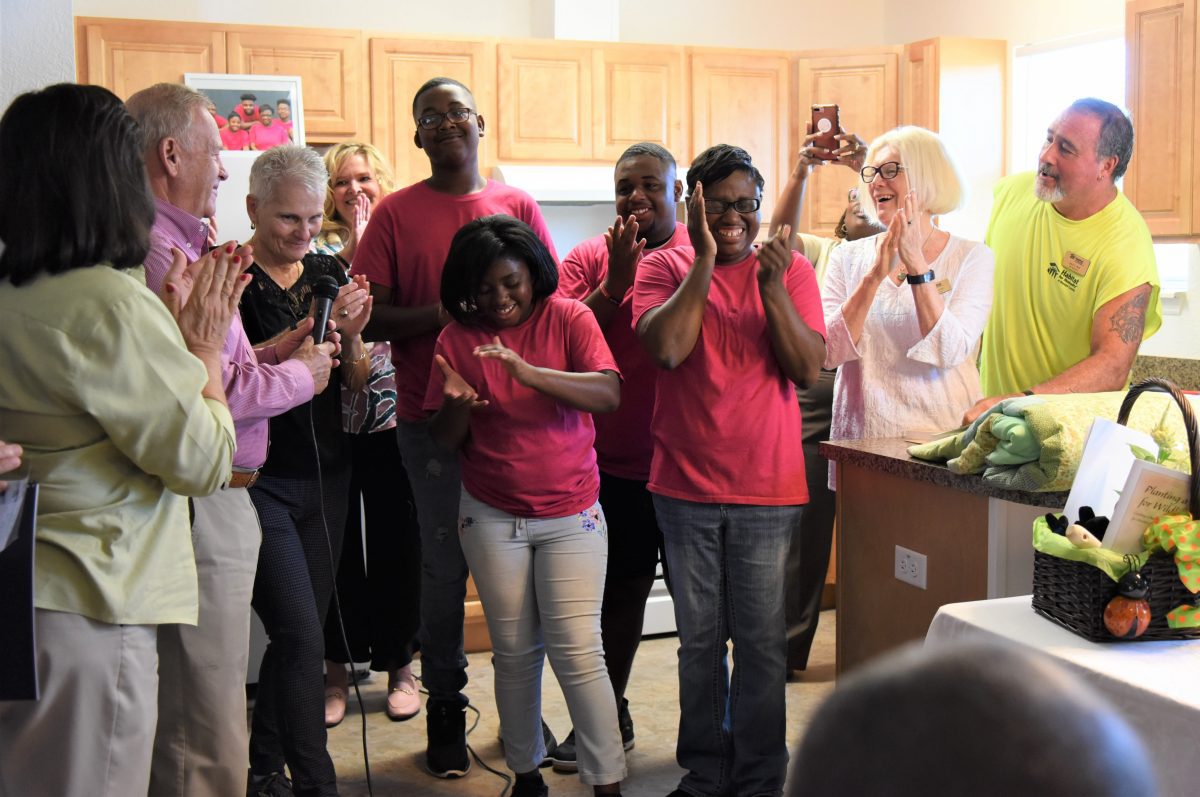 MELBOURNE | Patricia Barber received keys to her new home with tears in her eyes, Saturday, July 27, as her “Faith Build” came to completion. The “Faith Build” was an ecumenical collaboration between various churches, Habitat for Humanity of Brevard County, Inc. and the City of Melbourne. Together, St. John the Evangelist Parish in Viera, Ascension Parish in Melbourne and 17 other Protestant churches provided funds, prayer and manpower to construct the Barber home from the ground up .

This is the third home St. John the Evangelist’s Outreach team helped construct. Parishioner Mike Hurley, chairman of the project, said the reason they do it is simple. It starts with their motto – “Faith, Family, Destiny” – based on Hebrews 6:10: “God will not forget our work and the love you have shown Him as you have helped His people and continue to help them.”

Hurley said, “The project brought our own faith family out into the community to share their time, talents and spirituality. A special benefit for us was the privilege of working alongside the future owner, Patricia Barber, as she fulfilled her required Habitat volunteer hours.”

Barber was more than happy to take part in the construction of her new home. She worked hard to earn her spot. After being accepted, her commitment required about a year’s worth of service hours and classes before home construction began. She put in 300 hours for the City of Melbourne and 250 for Habitat. The best part is that her new home is right around the corner from her parents and the local park where her daughter goes to camp. “It was a lot of sweat equity hours,” says Barber, but it was worth it. Her application time included classes that taught money management and budgeting.

The single mother of four children between 7 and 22 years of age, works at nearby Holmes Regional Hospital. Barber is a 10-year member of Greater Ward Chapel African Methodist Episcopal. She said she was tired of living in a neighborhood with increasing rent and a history of violence and drug abuse. She relies heavily on prayer and believes this project was God’s response. “If all you’re going to do is worry, then don’t pray and if you’re going to pray about it, then don’t worry,” she says.

On the day of the house blessing, the naturally shy Barber was visibly overwhelmed. “It’s something I’ve always wanted and, by the grace of God, I got it.” Barber’s children also contributed to the construction. Hurley worked with one of Barber’s sons to install a window just above the kitchen sink. At the celebration, Hurley turned to him smiling and said, “Our work to install the window was on the outside. But from now on, you’ll be working on the inside, looking out as you wash dishes for your mom.”

Hurley noted, “As a parish, we’ve participated in and seen a home built and an entire neighborhood completely transformed. Through this transformation, selected Habitat for Humanity families now achieve the strength, stability and independence they need to build a better life.”

He is referring to the City of Melbourne and Habitat’s commitment to restore the Booker T. Washington neighborhood in East Melbourne. The partnership has completed 15 homes on the same block as Barber’s. “Our community involvement in Habitat and many other outreach programs continues to spark the light of Christ throughout,” he said.

M.E. Kelly, Habitat’s executive director, says Faith Build is an old program that was brought back because “the churches are the heartbeat in the community. They know the needs of their parishioners and who better to get involved than God, who’s already here.”

Jim Eisenmann, a parishioner from Ascension Parish in Melbourne who calls himself a “permanent Habitat volunteer” embraces the concept wholeheartedly. He’s been working on Habitat projects since he retired in 2016. “It is a help and such a joy to be a part of, to help the families and find out about their story. It’s like a little family being built as we build the house.”

Parochial Vicar at St. John the Evangelist, Father Patrick Riley, said this was part of Jesus’ teaching. “Although Jesus, as the Son of Man, had no address as home while he was on earth, he ‘pitched his tent with us’ in the Incarnation (John 1:14), accepted the hospitality of others and encouraged his disciples to give and receive the same. The early Church met in homes for the Eucharist and a following meal together, and missionaries like St. Paul continued the tradition.” He added, “The Church’s Book of Blessings has one for a new home, so a decent and dignified ‘habitat for humanity’ is presupposed for all in this life, while preparing for ‘the eternal dwelling place’ made for each in Heaven (John 14:3).”

For Barber, it is that Christian charity and faith that sustains her. “With God, faith and the Church, it all works,” she said. “We will cherish this community as long as God has mercy on us … Thank you volunteers and Habitat for hand up, not a hand out – for this safe and secure home.”