Fifty people gathered at St. Ann Catholic Church on May 1 to look for God and they didn’t have to look very far. They attended a retreat led by Sister Pat Thomas of Renew International titled “Discovering God in the Ordinary.” 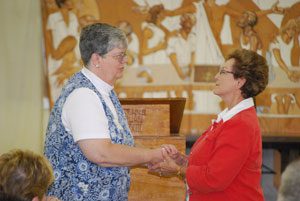 Fifty people gathered at St. Ann Catholic Church on May 1 to look for God and they didn’t have to look very far. They attended a retreat led by Sister Pat Thomas of Renew International titled “Discovering God in the Ordinary.”

Sister Pat (pictured below, left) offered the sign of peace to one of the participants and showed everyone how to turn this ordinary ritual into an extraordinary experience of God’s love. All it took was eye contact, a smile and an intentional effort to extend the peace and joy of our Lord.

“An ordinary ritual becomes a sign of God’s presence among us,” said Sr. Pat. “In the ordinary everyday living we need to see each other living our faith.”

“This retreat experience was developed as a part of the whole Why Catholic? process. It is intended for anyone in any parish in the diocese to attend,” explained Sr. Pat. “It feeds into the themes of this second book of the Why Catholic? year (“The Profession of Faith: What We Believe”) where the small communities have been engaged in sharing the search for God in their lives and the development and growth of their own Faith.”

“I was intrigued by the topic,” Peggy Hollerbach said when asked why she decided to attend the retreat. “I think so often we’re looking for something and it’s right there in front of us all the time and we fail to see it.”

Fellow St. Ann parishioners Paul and Jacquie Menard also appreciated having the opportunity to share their faith with others. “The sharing and the enthusiasm of the people that come here has been very inviting,” said Paul.

Jacquie added that the most important lesson she learned from the “Discovering God in the Ordinary” retreat is to “put God first in our lives and keep him there.”

“The responses so far from those attending have been very positive because it reminds them how any part of their lives can be extraordinary once they totally accept that God is all part of it, is everything in it, that nothing they do can be done without God,” said Sr. Pat. “We also ask them to think of the saints in their lives who have been ordinary people but who gave them such extraordinary examples of faith.”

After several participants stood in front of the entire group to share their experiences with saints they have encountered in their lives Sr. Pat asked, “As you think of the saints you raised up, think of how are you like them, and if you’re not like them at all, why not? What’s keeping you from being like them? Through the eyes of faith we see in those people’s experiences in the things they did or the things they are doing, an expression of God.”