Local Sister Stresses Interdependence between Care of Planet and People

Adrian Dominican Sister Patricia Siemen has devoted much of her life’s work to advocating for care of our common home. 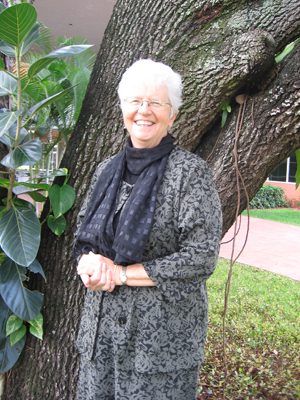 During Earth Day, our culture stops and reflects on how our actions impact the world in which we live. As Catholics we have a long history of environmental stewardship. Many Catholics take seriously the call of Pope Francis to truly examine their relationship with God and the world.

Adrian Dominican Sister Patricia Siemen has devoted much of her life’s work to advocating for care of our common home. In fact, her passion on the topic led her to participate in the United Nations Paris Climate Conference in December of 2015.

“We identified 80 different people to give testimony to judges from different countries with different kinds of expertise,” said Sister Pat. “They told the stories of what is happening in their communities with human rights and environmental violations– we call them co-violations. It’s often that when a local environment is being destroyed, so is the means of life for the community.”

The interconnectedness between humans and the environment, especially in regards to the effect on the poor and vulnerable, is a concept that Pope Francis discusses at length in Laudato Si’ and is an idea that Sister Pat believes all the faithful could benefit by studying.

“The number one thing churches can do is start study groups on Laudato Si’. It comes right out of the heart of the Church’s teaching,” said Sister Pat, who recognizes the need for a cultural transformation in order for real change to occur. “Pope Francis calls us to look at our lifestyle and the choices we’re making. There are multiple steps we can take to live more sustainably but I think as a faith community, those behaviors need to be grounded deeply in a respect for creation.”

Sister Pat spent the early years of her ministry engaged in human rights and civil rights issues, earning a law degree to better advocate for the poor and vulnerable. For the last fifteen years she has concentrated on environmental issues as the director of the Earth Ethics Institute at Miami Dade College (2001-2004) and founding director of the Center for Earth Jurisprudence (CEJ) at Barry University School of Law in Orlando (2006-present). While it may appear that the focus of her work has shifted, Sister Pat believes that these areas are profoundly connected.

“The fact is we cannot have well humans on a sick planet,” explained Sister Pat who has been greatly encouraged in her ministry by the words of Pope Francis and his encyclical Laudato Si’. “Pope Francis sees this as an important issue because of the degree of degradation and devastation that is going on and the intimate link that environmental injustice has on people’s lives, particularly the poor and vulnerable.”

The CEJ’s mission is to advance laws and governance that reflect humans’ interdependent relationship with the natural world. This is accomplished through advocating for laws and policies, sponsoring courses and events at the University, and promoting the cultural transformation needed to create a more just society.

After ten years Sister Patricia Siemen is leaving her role as director of the Center for Earth Jurisprudence to serve as prioress of the Adrian Dominican Sisters. As Prioress, she will hold the highest ordinary authority in the Congregation. The Dominican Sisters of Adrian are a Congregation of about 700 vowed women religious whose roots go back to St. Dominic in the 13th century. The Sisters minister in 26 states; the District of Columbia; and in five other nations: Canada, the Dominican Republic, Mexico, Norway, and the Philippines.