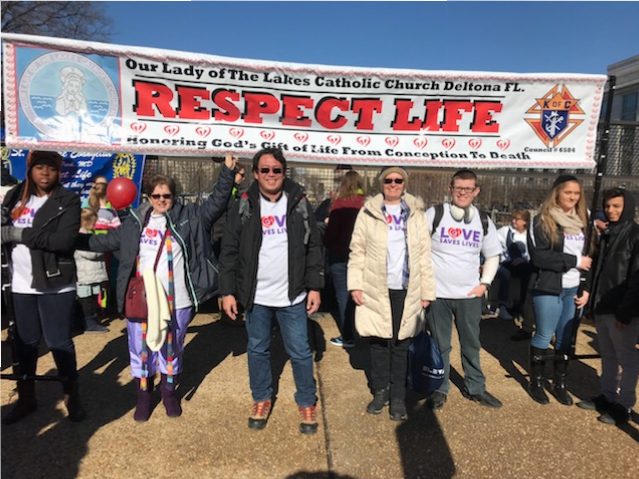 “I have felt out of the ordinary,” said Sierra, a high school junior. “Most people at my school are for abortion and I’m one of the only people who are not.”

Describing herself as “passionate” on the issue of abortion, Sierra has attended the local March for Life in St. Augustine for the past several years. This year however, she joins a group of eight youth and adults from her parish, Our Lady of the Lakes in Deltona to travel to Washington, D.C. to participate in the national March for Life on January 19. At least for one day Sierra won’t feel alone in her belief in the sanctity of life as she marches and prays with hundreds of thousands of others at the largest pro-life event in the world.

“I feel like it is important for young people to be present at the March for Life because if the public sees young people there it’s inspiring them and having an impact that young people care about pro-life issues,” said Sierra.

Our Lady of the Lakes will join others from the Diocese of Orlando in D.C., including forty students and staff members from the Catholic Campus Ministry at the University of Central Florida and twelve Bishop Moore Catholic High School juniors and seniors, led by Sister of the Pierced Hearts of Jesus and Mary Kristi Bergman.

“I think it’s important for young people to be a witness to our culture that they are a pro-life generation,” said Sister Kristi. “The youth want to make a difference so much and they are told, ‘When you grow up, you can do great things,’ but the reality is they can do great things now and they are called to be the light of Christ now. The Lord needs them now. This trip is the perfect opportunity for them to see that they don’t have to wait until they are older to actually make a difference, to make an impact. They can do it now. This March is full of youth and it’s so encouraging for them to see they aren’t alone in this fight. We can change what is not right in this culture. Their presence says so much.”

The theme of the 45th annual March for Life is “Love Saves Lives”. The March began in 1973 following the Roe v Wade Supreme Court decision that made abortion on demand legal throughout the United States. The mission of the March for Life is to provide all Americans with a place to testify to the beauty of life and the dignity of each human person and to communicate this message to the government, the media and the nation in a way that is powerful and life affirming.

“Our purpose for attending is for us to help promote and provide a voice in support of dignity of the human person, from the moment of conception to natural death,” said Father Kenny Aquino, parochial administer at Our Lady of the Lakes.

Father Kenny first participated in the March for Life in 2005 with the youth group from St. Joseph Parish in Winter Haven. He was impressed with huge turnout of supporters despite the cold temperatures that weekend and with the lasting impact the March made on the youth after they returned home.

“Seeing the involvement and commitment of young people to the cause of the pro-life movement and the growth in the understanding of members of the parish of our responsibility to promote life, gives me hope,” said Father Kenny.

Sister Kristi agreed. She noted that this particular group of students from Bishop Moore, who come from the Hornets for Life club or peer ministry team, have all had experiences that make the pro-life cause very personal to them. Some were adopted or have siblings who were adopted. They know firsthand the importance of honoring the sanctity of life.