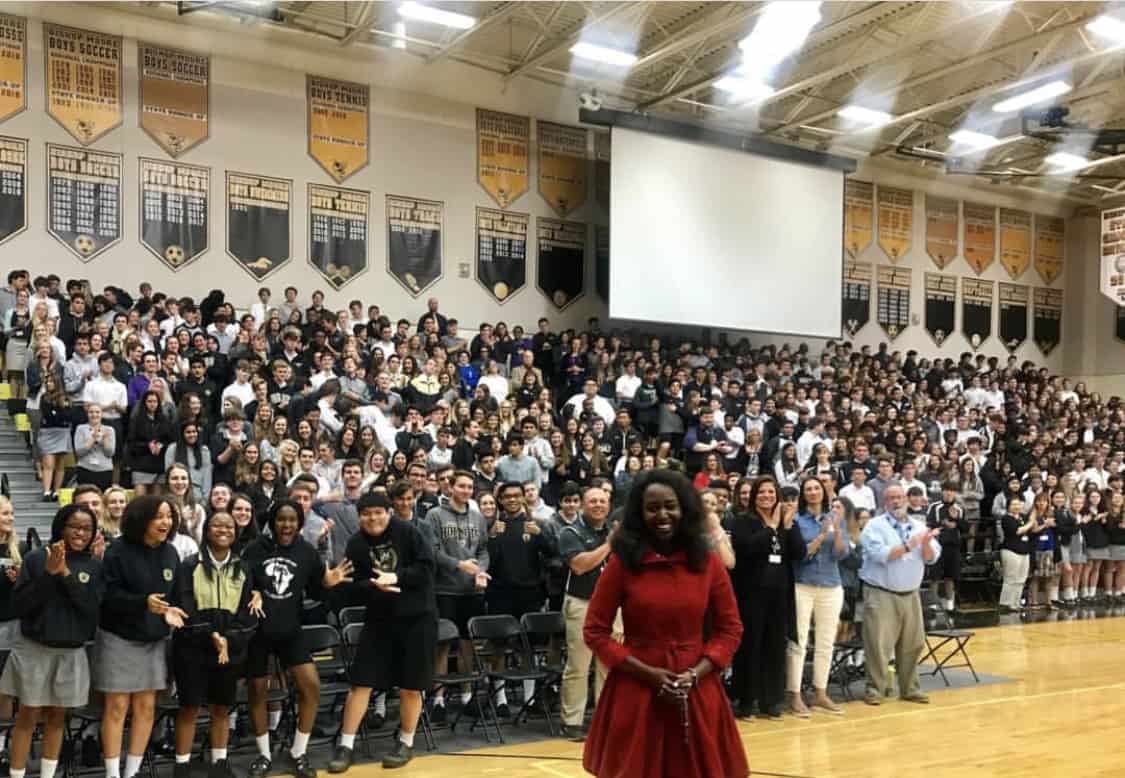 ORLANDO | She’s a long way from home, but closer to God now more than ever. Immaculée Ilibagiza was born and raised in a small village in Rwanda, Africa. She had a wonderful childhood with loving parents and three brothers. She went to college to study engineering. Her future looked bright until chaos broke out in the early 1990s. Extremists assassinated the Rwandan president. Then went from town to town slaughtering men, women and children. Immaculée now makes it her mission to share this story with fellow Christians worldwide and recently shared her experience of suffering and the importance of forgiveness with the entire study body of Bishop Moore High School on March 29.

As genocide raged throughout the country, Immaculée’s father, a devout Catholic, told her seek protection at a local pastor’s house. For the next three months, she and seven other women hid in a 3 x 4 foot bathroom. She had a Bible, rosary, and clung to God to turn away from the anger boiling inside of her. She admits it was not always easy. “I said the Lord’s prayer hundreds of times, hoping to forgive the killers who were murdering all around me,” she said. “It was no use- every time I got to the part asking God to ‘forgive those who trespass against us,’ my mouth went dry… My inability to forgive caused me even greater pain than the anguish I felt being separated from my family, and it was worse than the physical torment of constantly being hunted.”

In preparation for Immaculée’s visit, Bishop Moore students closely studied the Rwandan Genocide. They tried to squeeze into a taped square on the floor – representing the same space of tiny bathroom where eight women spent 91 days. Many students were stunned by the challenge and wondered how the women could even sleep.

Immaculée explained to the teens, when she was finally liberated from that room she was just skin and bones. Her entire family was murdered, except one brother studying abroad. Nearly one million of her extended family, friends and neighbors were also massacred. Her suffering, physical, mental and spiritual, lasted for months. Then, she came face-to-face with the man who murdered her mother. With God’s grace, she simply said, “I forgive you.” As Immaculée reflected on the death of her family she reminded the students, “Your journey is still here. You don’t know how long so live each minute with love.” They were astounded by God’s mercy and forgiveness within Immaculée as she said, “Every day I wake up is another chance to love someone new.”

Pope Francis recently echoed those sentiments during general audience in Rome April 10. “Just as we need bread, so we have need of forgiveness. Every day!” he said. “We are truly in debt to God because everything we have has come as a gift from Him… we are only capable of loving because we have been loved first; we are able to forgive only because we ourselves have received forgiveness.”

Honors students were pushed into even deeper reflection with a follow up presentation from a guest speaker from the Holocaust Center in Maitland, who shared factors that can lead to such violence. Students then discussed the similarities between the Holocaust and the Rwandan Genocide and what we can learn from them. “We really like to celebrate this cross-curricular approach which helps students apply what they heard about historical events to what is happening in their own lives today,” shared Amanda Livermore, director of mission effectiveness at BMC. “In particular, the negative power that hating a particular group of people can have on the world.”

Immaculée is regarded as one of world’s leading speakers on faith, hope and forgiveness. To learn more about her story visit www.immaculee.com.

By Amanda Livermore and Jennifer Drow, Special to the Florida Catholic – April, 2019