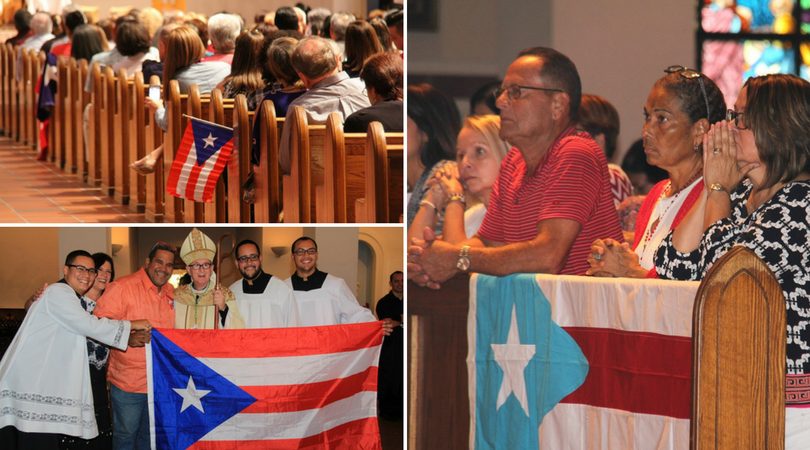 By Glenda Meekins of the Florida Catholic Newspaper – October 4, 2017

ORLANDO | Tears began to flow for Delbert Rodriguez and Sonia Mendez, parishioners at St. Charles Borromeo Parish in Orlando, as they spoke of their family still in Puerto Rico following Hurricane Maria, a devastating Category 4 storm that struck the island on Sept. 20. Rodriguez had only just spoken to his daughter; more than a week after Maria left her mark. “Thankfully, she is well,” he said trying to contain his sobs. “We can’t go right now, but we are trying to help them from here,” he said. “We are strengthened in the faith,” added Mendez.

Delbert and Sonia were among the hundreds of people who poured into the Basilica of the National Shrine of Mary, Queen of the Universe in Orlando Saturday, Sept. 30 for a Mass of Solidarity to pray for those affected by the hurricane. In a moving display of patriotism and solidarity, those gathered sang the island’s national anthem to the sound of Puerto Rico’s national instrument, the cuatro, and waving flags as the delegation of priests and deacons processed to join their flock in their hour of need.

Teresa Salamanca came with her family from Holy Spirit Parish in Lake Wales and is originally from Ponce. She was touched by Bishop Noonan’s response to Puerto Rico’s crisis with the Mass of Solidarity. “The love he has for his people shows me that he is united in solidarity with those who are suffering. It says a lot about him.”

Salamnca’s seven siblings and more than 20 nieces and nephews are still in Puerto Rico. Although it was almost a week before she heard from anyone, she said, “We did not despair because we have faith. I know that God will protect them.” When one of her sisters finally got through, she broke down crying and told her that damage throughout Puerto Rico had been catastrophic and it appeared as if fire had burned everything.

Those who participated in the celebration of Mass came with donations of food, water, and personal hygiene items collected by Catholic Charities of Central Florida for the residents of Puerto Rico who continue to struggle without power and basic necessities such as food and water.

“Tonight we get hotdogs and tomorrow corned beef, then Spam. The only problem is that we only prepared for one week.” Salamanca’s sister reported. She explained that grocery stores have not been replenished as there is no electricity to light the stores. Salamanca noted, “They live day to day. Their cash is running out. People are getting to a moment of desperation,” she said.  The National Guard has come in to protect the community and everyone is being extremely careful and cautious.

“This is not God’s last word. He continues to speak to us,” said Father Vargas, pastor of Holy Spirit Parish in Lake Wales and a Puerto Rican from Aguada. “The hurricane passed through Puerto Rico, but also through our hearts. But we are here celebrating in our hope and our faith. Our Island of Enchantment is not abandoned.”

Although common sorrow bound those gathered, a resounding chord of hope was felt throughout the community. “Puerto Rico will again stand with the glory and grace of our Lord…,” said Father Vargas. “The coqui will not stop singing; the jibaro will not stop taking up his machete to go work in the field; the compadre and comadre will not stop laughing and smiling—because God has blessed our island of enchantment, and Puerto Rico, as the precious island that it is, will rise.”