Pope Benedict XVI has declared the Year of Faith for October 11, 2012 through November 24, 2013. Rediscovery of the teachings of the Second Vatican Council is among the principal recommendations for our observance of this year of deepening encounter with our Risen Lord. 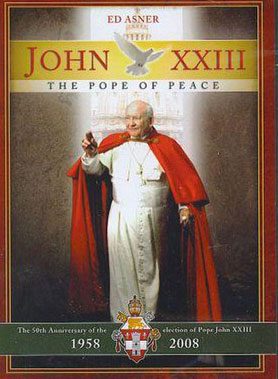 Pope Benedict XVI has declared the Year of Faith for October 11, 2012 through November 24, 2013. Rediscovery of the teachings of the Second Vatican Council is among the principal recommendations for our observance of this year of deepening encounter with our Risen Lord. As an initial step in this rediscovery, we feature the 3 hour, 2008 movie, “John XXIII: The Pope of Peace.” The Spanish language DVD is available under the title: “Juan XXIII, El Legado De Una Vida.” Good Pope John convened the Second Vatican Council in fraternal dialogue among the Roman Catholic Church, the Christian denominations, the great religious faith traditions and the secular world.  This Sunday, June 3rd, will be the 49th anniversary of his passing into eternal life. He was the Pope of my childhood. Even in the primary grades in the early 1960s at Ascension School in Manhattan, I sensed the fresh air from the windows he opened. Occasionally, one of the Sisters of Charity or a De LaSalle Christian Brother hinted at the big doings in Rome. In this biographical movie, the life story of Angelo Roncalli unfolds from his boyhood vocational call, through papal nuncio postings in Bulgaria, Turkey and France, to his short but transformational pontificate. Ed Asner plays the title role with warmth and confidence alongside an international cast. I have often reflected that the most profound thoughts are rendered in the simplest terms by great minds. Albert Einstein exemplified this truth in his expression of the relation between mass and energy. Pope John’s profound thought, his enduring charism, was his insistence on the integrity of peace. He held in his heart the truth expressed by the Jesuit poet, Gerard Manley Hopkins: “…piecemeal peace is poor peace.” While advisors cautioned highly nuanced positions, he called the divided nations of the earth back to their common humanity – their common identity as children of God. His plea to the Americans and Soviets to simultaneously stand down their naval forces during the Cuban Missile Crisis defused the gravest threat the world had yet known. Rather than condemnation, he continually offered dialogue. A detailed biographical booklet accompanies this DVD. Order this title from the Media Resource Center @ click here, or call Dan Hardester or Diane Gallagher@ 407-246-4895 (or 4897).(Dan Hardester serves as Secretary of the Evangelization Secretariat and Director of the Media Center.)