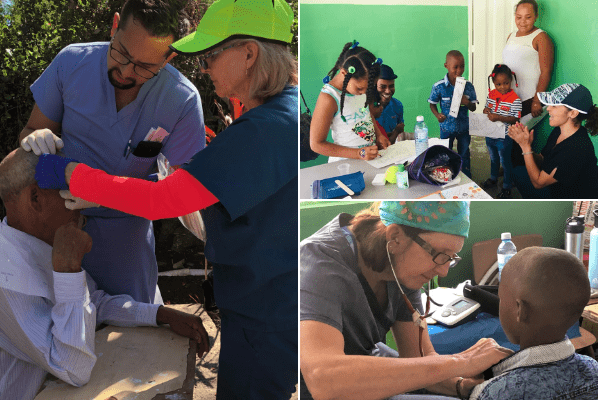 DOMINICAN REPUBLIC | Not everyone has the privilege to go to the doctor when sick or the resources needed to stay healthy. Jan. 26 through Feb. 2, a team of 17 doctors, nurses, and translators went to the Dominican Republic as part of a medical mission from the Diocese of Orlando. They cared for more than 600 residents in the mountain regions of our sister diocese of San Juan de la Maguana.

Medical missions to the Dominican Republic began more than 20 years ago, shortly after Ursuline Sister Bernadette “Bernie” Mackay began serving the community as director of the Mission Office. Over the years, the face of the mission has changed. Sister Mackay is proud of the progress. “The health care in the communities up here has improved. With continual monitoring of our children, and making sure they have adequate food, especially with the assistance of the Orlando communities in providing peanut butter for their breakfast, we’ve managed to maintain our children in a very good, stable, healthy situation.”

Mary Barber is a parishioner at Blessed Trinity in Ocala and a dermatologist. She recalled the early years when they offered basic medical care – like drugs that kill off parasitic diseases. “They had a lot of skin issues and skin cancer.” But then, “The kids started growing like crazy once they got vitamins, dental care, and filtered water… They weren’t healthy before, but now they are,” said Barber. Often the students fell asleep during class because they were malnourished. At school they received two meals. The combination made a difference. For the first time in seven years, children at the Catholic schools established by the mission no longer need annual physicals. “Now we know the children are healthy, so now we just pay close attention to them to address their specific medical needs and focus on the incoming students,” said Sister Mackay.

Barber has served on medical missions since the beginning. In fact, on her first visit, she met a child needed treatment after surviving a fire. Sister Bernie told Barber, “You should take her home because she’s an orphan.” And Barber did. Julia is now 28-years-old and one of Barber’s five children. She began the endeavor as “an adventure”, but admits she didn’t know what she was getting into. She has no regrets. Many of Barber’s children have followed her example of caring for their neighbor. One daughter served on a medical mission and her son worked a construction mission.

On this recent trip, Barber worked with Abinette “Aby” Soto, a parishioner at Holy Cross Parish in Orlando. This was her fourth mission. She began in 2016 after hearing a young girl share her testimony about serving. Soto recalls, “I heard God calling. He said, ‘I want you there and I want to use your skills to serve the ones that need it.’” She rejoiced and began to cry. Six months later she was in the Dominican Republic. As a pharmacist, she noted, “I always had this feeling that one day I could exchange drugs for hugs. I love hugs and smiles. God has been so wonderful that He gave me that gift.” Her dream of having a mobile pharmacy also came true. As she hands out medication, she receives hugs full of gratitude and love. “I keep going because it fulfills my life in many, many ways. They have less material things, but an abundance of everything else. They are beautiful, kind people and very thankful.”

Thanks to progressive improvement in overall health, this year’s mission expanded medical services to more remote regions of Azua. “It was amazing,” said Soto. “Every day was a new experience.”  She was grateful to broaden their scope of care. “Every time I go, and on this particular trip, I create a canvas of beautiful memories of joy, love, compassion, kindness. I am able to experience it in every person that I meet. Even though we come from different backgrounds, we are all connected by divine love. It amazes me every single time. I can walk with Him and it touches me.”

In November, approximately 50 doctors, anesthesiologists, nurses, and translators will operate on more than 150 patients during a surgical mission. Call the Mission Office at 407-246-4890 for more information.