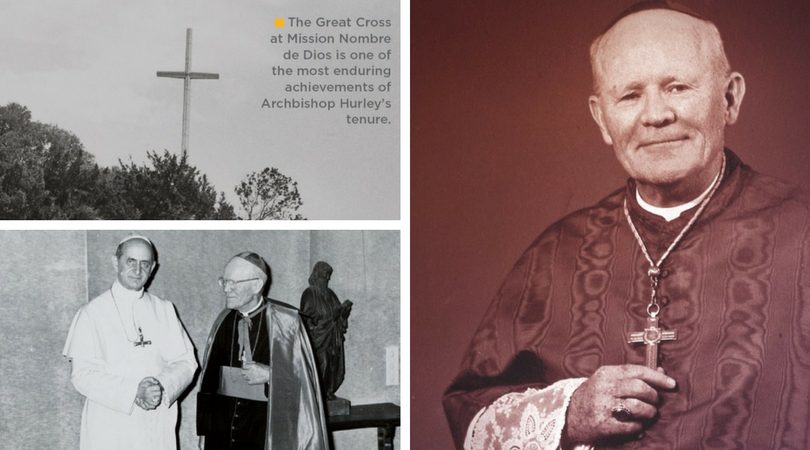 The community is invited to join the bishops at the Cathedral Basilica of St. Augustine (38 Cathedral Place) beginning with a 5:00 p.m. talk by Archbishop Thomas Wenski of Miami and Mass at 6:00 p.m. Homilist for the Mass is Bishop John Noonan of Orlando.

Archbishop Hurley served the diocese from 1940-1967 when the diocese encompassed all of Florida east of the Apalachicola River. He died on Oct. 30, 1967, at the age of 73.

Archbishop Hurley also was a Vatican diplomat, which took him to India and Japan, to Rome during the tense years leading up to World War II and after the war to Yugoslavia during the rise of communism (see article accompanying this release for background).

In the 1950s and ‘60s, the construction of interstate highways brought massive growth to the state, and he took to the air to get a birds-eye-view of development. He scouted out acreage for future churches and schools buying it when land was still inexpensive, which has enabled all seven dioceses in Florida to keep up with the growing Catholic population.

During World War II, tourism in St. Augustine dried up; Archbishop Hurley called on friends in the U. S. State Department, who he knew from his diplomatic service, for assistance. They arranged for Hurley to meet with top military brass in Washington, and the Coast Guard decided to establish a training base in St. Augustine, taking over the tourist hotels for the duration of the war.

In the 1940s, he organized the Catholic Charities Bureau, consolidating a variety of social services in the diocese and opening offices in Jacksonville, Tampa, and Miami, doubling its budget and hiring a full-time director.

In the 1950s and ‘60s, Hurley recruited seminarians from Ireland to staff the growing number of parishes.

In 1956, he established Morning Star School, the first school for the disabled in the state. A wing of the new high school bears his name. Morning Star schools are now operating in Jacksonville, Orlando, Tampa, and Pinellas Park.

In the 1960s, Hurley attended all four sessions of the Second Vatican Council, which he described as “a Christian awakening” and began implementing the sweeping changes.

To celebrate the 400th anniversary of the City of St. Augustine, Hurley erected the Great Cross and Prince of Peace Votive Church on the site of Mission Nombre de Dios.

Archbishop Hurley’s service of 27 years as Bishop of St. Augustine was by far the longest of any Florida Bishop. His many accomplishments were not confined to bricks and mortar. He was above all a dedicated churchman who sought God’s glory.

“He was one of the great shepherds of the American Church. A powerful orator, a man in love with the beauty of the House of God, a prelate of unwavering faith, maintenance of principle, and uncompromising honesty, he was a bishop to his fingertips,” said the late Dr. Michael Gannon, in an article published in the St. Augustine Catholic  magazine.

Archbishop Hurley’s deeds grow in stature with each passing year.