Men fortified by faith at Rise Up 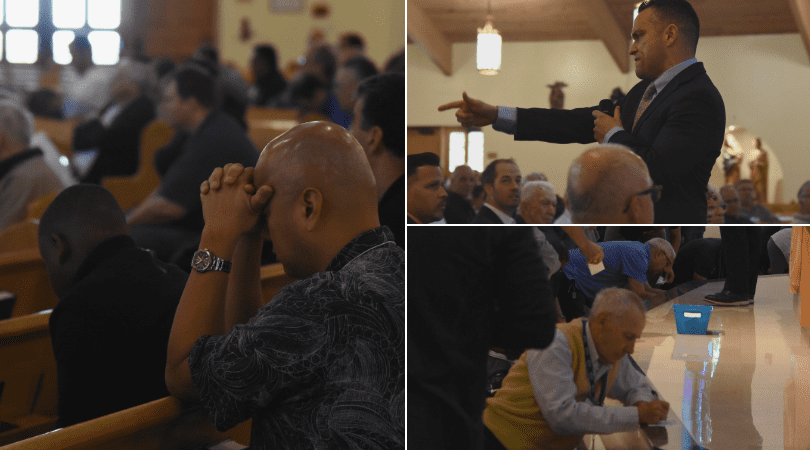 ORLANDO | More than 400 men from the Diocese of Orlando, of all ages, came to fortify their faith with the help of dynamic speaker Justin Fatica of Hard as Nails, at the Fourth Annual Rise Up Conference at Holy Family Parish in Orlando, March 23. This year’s challenge was for young man, 16 years of age and older, to invite their fathers to attend together.

He said, “The mission for youth to awaken adults to the power of God’s love is the key. They are the key to our church. When a young person asks their dad, “Dad, I want you to come pray with me,’—whether they’re an atheist or devout Catholic, what are they going to say, ‘No?’” He added, “If we can train our young people to not be afraid to transcend that, it makes a difference.”

Grant H. is a 10th-grader and Holy Family parishioner who saw the conference announced in the church bulletin. Attracted by the caption “growing men in the church,” his interest peaked. He came with his father John and brother Colin, a freshman in college.

“I’m coming away with lessons about how I can connect with what he’s (Fatica) talking about that I can apply to my life,” said Grant. Colin acknowledged that the message, of loving unreservedly and sharing your challenges with others, “is contrary to what society tells you.” John noted that the principles go beyond just men. “It is a message of how we stay connected to our God and our faith. We’re all on a journey together. As early as these guys can get this as a fundamental part of their life, then they are better structured to be successful, better men as they mature.”

Grant added, “It’s as hard as you make it on yourself. The people you surround yourself with; the expectations you set for yourself; that’s all affected by how well you do this (integrate the principals being taught).” He acknowledged, knowing you are not alone makes a difference. Colin added, being surround by people “who don’t make you feel pressured to keep it (emotions) in helps.”

And that is Fatica’s message: To be open and willing to be vulnerable as a man, before God, family and friends. He explained that the only way sons will learn to deal with their emotions and be free to love unreservedly is if they see that expression of love and vulnerability in their fathers. Only then will their sons know they are loved and be unafraid to fail.

To help face their fears, the men were asked to write down their greatest challenge on a piece of paper and set it in a bucket before the altar. The challenges were prayed over during Mass and later set before the Blessed Sacrament in Holy Family’s Adoration Chapel.

In his fourth year attending, Bryan was glad to finally bring his 16-year-old son, Joseph, a freshman at Bishop Moore Catholic High School in Orlando. “It was inspirational,” said Joseph. “It showed that you can’t change the world alone and we really have to be honest with ourselves and God in order to make that change happen.”

Bryan added, “For me, attending is letting my son know it’s okay to be a man. The current vilification of men is a broad brush stroke which is rightly called out in some cases, but is not all men. When I see the acts associated with those things (sexual abuse), those males are not acting like men… men in the way we are called to be, respecting people in the way the Lord does.” He added, “I brought my son here to show him what good men look like.” He referred to men who are seeking to build their relationship with God; men with a good moral compass who understand that strength requires lifting up those less able and protecting the vulnerable.

In closing, Fatica asked those present to accept Jesus Christ into their life. “It seems like an evangelical or Protestant thing, but it’s not. It’s a Jesus thing. It’s a daily thing for us,” he emphasized. “He who has been saved from the most, is the most passionate. The encounter is to say, ‘I am saved. God has given me himself and saved me from all these things, and now I’m here.’”

For those who have not encountered Christ, Fatica says, “Sorry. That means that me and you and all those who are Catholic aren’t doing our job… What you believe is what you receive and we have to start believing that God uses us to heal. We need to put it on ourselves to give others encounter.”