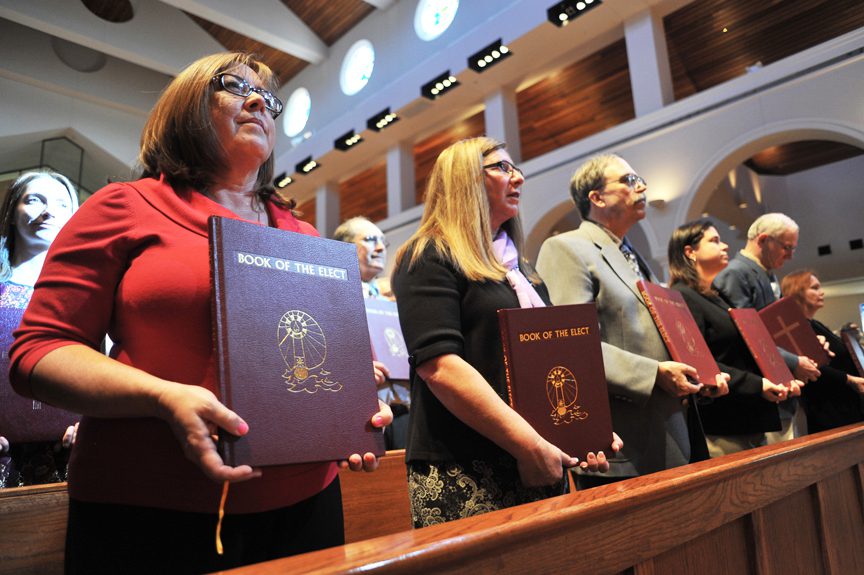 There are 586 individuals who will come before Bishop John Noonan on March 5 at the Basilica of the National Shrine of Mary, Queen of the Universe to profess their desire to live the Catholic faith. These individuals come from over 60 parishes and missions from throughout the Diocese of Orlando and are preparing to become Catholic by receiving the Sacraments of Baptism, Confirmation, and Holy Eucharist at the Easter Vigil. Joined by family and friends, more than 2,000 people are expected at this joyous occasion.

The prayer service on March 5 is known as the Rite of Election and is one big step on the journey of faith for catechumens, the term used for the unbaptized who are preparing to become Catholic. Having already been entered into the Book of the Elect at their parishes, the catechumens will officially be declared members of The Elect by Bishop Noonan during the Rite of Election.

“Election” refers to the idea of “the chosen people.” In Israel’s early history, God chose a people and established a covenant with them. Christians believe that God continues to choose people, now through the covenant of Baptism. The Rite of Election thus establishes the names of those who will enter the new covenant through the Sacraments of Initiation.

Between the Rite of Election and receiving the three Sacraments of initiation, The Elect will undergo a period of Purification and Enlightenment.

According to the Rite of Christian Initiation of Adults, The Elect will celebrate three scrutinies or examinations. “By this means, first of all, the elect are instructed gradually about the mystery of sin, from which the whole world and every person longs to be delivered and thus saved from its present and future consequences.

From the first to the final scrutiny the elect should progress in their perception of sin and their desire for salvation.”