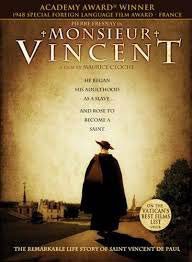 In March, in a speech at Vatican City, our newly elected Pope Francis remarked, “Oh, how I would like a poor Church, and for the poor.” 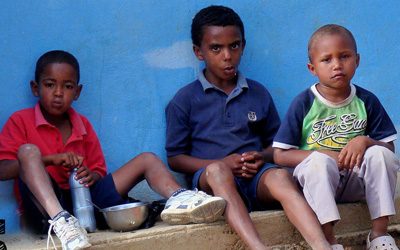 In March, in a speech at Vatican City, our newly elected Pope Francis remarked, “Oh, how I would like a poor Church, and for the poor.” As I examine my own life to see how I can best live out the Pope’s charge to Catholic Christians, I look to the life of St. Vincent de Paul as an example of one who lived and breathed this philosophy. In honor of his feast day on September 27, we feature the classic film “Monsieur Vincent.” Filmed in 1947 in black and white, it depicts a young Fr. Vincent, recently having left the comfortable life of priest and tutor in the parishes of Paris, now assigned to the town of Chatillon-les-Dombes in southeastern France. Facing many obstacles, including a vandalized and abandoned church, lack of funds, and a parish whose wealthy members ignore the needs of their poor neighbors, Fr. Vincent becomes one with the poorest of the poor. He chooses to live among them in squalid conditions, tending to them with offers of food, aid in finding work, and foremost, helping them to discover God in the midst of their struggles. His example transforms many in the community to recognize their role as “brother’s keeper” and bring about change. Both the Daughters of Charity and the St. Vincent de Paul Society were formed based on Fr. Vincent’s life and mission. Fall in love with this saint who was so in love with the poor. Order this DVD at https://www.orlandodiocese.org/mc-media-center-home. Please call Diane Gallagher @ 407-246-4895 for assistance in using audiovisual media in faith formation for all age groups. (Diane Gallagher serves as Media Center Coordinator.)

To learn more about the St. Vincent de Paul Society in the Diocese of Orlando, go to http://www.svdporlando.org/