Mother Teresa’s Canonization Through the Eyes of Three Local Priests 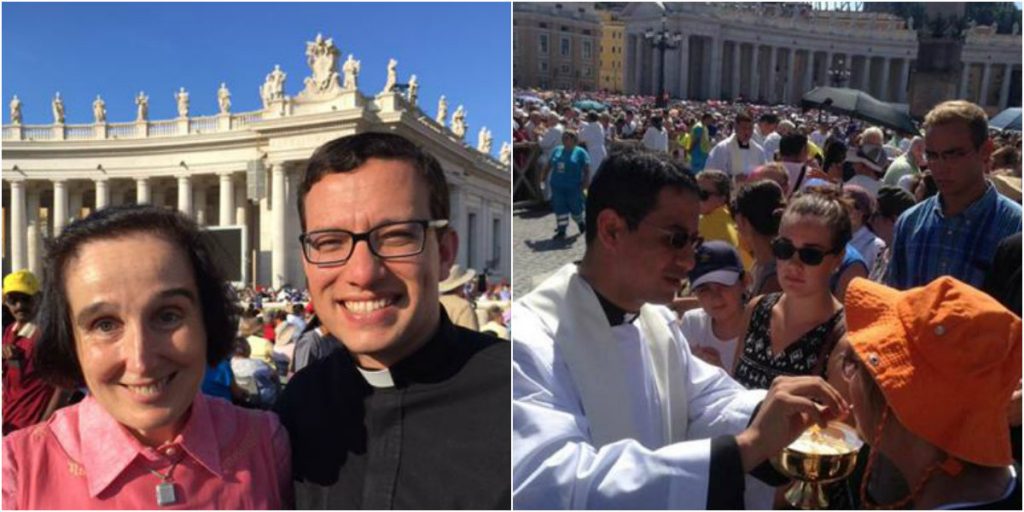 ORLANDO | As thousands of pilgrims gathered in the twilight hours before dawn, St. Peter’s square slowly became alive. Father Jorge Torres, vocations director for the Diocese of Orlando had been invited to distribute Holy Communion during the Mass celebrated for the canonization of Mother Teresa of Kolkata. As he waited for Mass to begin, he observed groups of 20 to 30 people, speaking in various languages, sharing stories of their connection to the small Yugoslavian figure that has become synonymous with love and charity.

“Some people went seeking miracles,” said Father Torres. “Others went to thank the Lord for the gift of Mother Teresa’s teachings, of her witness, and of her testimony.”

He watched as many of the Missionaries of Charity, who had come from all over the globe to honor their founder, rejoiced at the reunion. “The feeling was of joy all around,” he said.

Diocesan priest Father Dominic Buckley, who is studying in Assisi, Italy was also in the crowd. He reached Rome with an American tour group and sat in front of the papal altar, amidst the throngs of admirers who had come to celebrate this century’s most famous saint.

As a student in Miami, Father Buckley often spent his Saturdays working with the Missionaries of Charity, feeding the homeless and mopping floors. “It was really the sisters who touched my life,” he said. “They helped me want to be holy, to want to devote my life to Christ and to the Gospel. They showed me that it was possible.”

Just a few rows behind him, was Dr. Gianna Emanuela Molla, daughter of St. Gianna Molla. St. Gianna died in 1962 after a tumor developed during her pregnancy. Faced with the decision to choose between saving the life of her child or her own, she insisted that all be done to save her child. In 2004, Pope John Paul II canonized her.

Father Buckley said, “We were honoring Mother Teresa and what the Lord did through her. Then I also was able to meet the daughter of a saint. I walked away with a deeper sense that saints are real.”

On the other side of the world, Father Esaú García, pastor of Holy Cross Parish in Orlando, was in Kolkata teaching a class to the Missionaries of Charity at their Mother House. He said it felt like a miralce regarding his opportunity to travel to India. Another priest was to give the course to the sisters, but could not go and asked Father García to take his place.

As a young man discerning his vocation, Mother Teresa had a great influence on him. “For me, it was that love and that commitment…I wanted to do something like her, to give my life for something bigger. We are all called in our mission, to be like her,” he said, affirming what Pope Francis said in his homily.

Father Torres said the Pope spoke of the universal vocation to charity and “that each of us is called, regardless of which is our lifetime vocation… to be charitable to the person next to us.”

The Pope often speaks of our calling to be saints and they may not be as rare as one might think. As Father Buckley concluded, “… it is possible to be a saint in today’s world and they just might be sitting two rows behind us at Mass.”