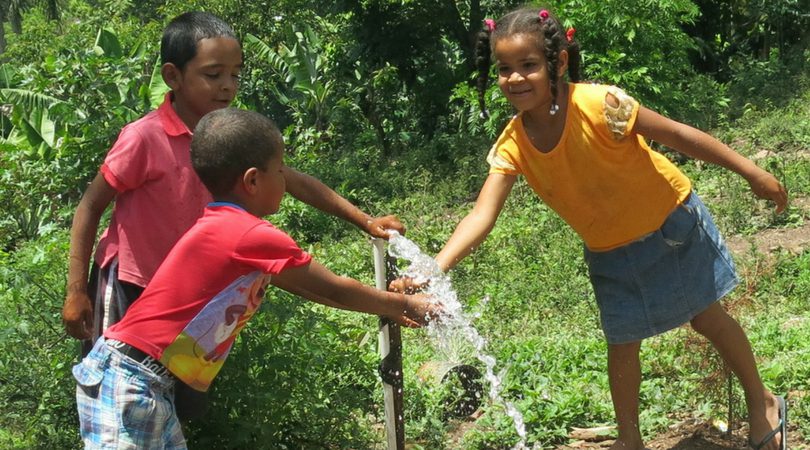 It was a day that would leave an indelible mark on the El Montazo community that, until now, had no running water. It was early the morning of June 3 when a team from the Diocese of Orlando and the community committee of El Montazo, Dominican Republic, began traveling from house to house. They were checking to confirm that their new aqueduct was distributing water to all the homes in the community. The project, which had begun in February of this year, was complete at last.

As the new aqueduct’s supply pipe was open, delivering water from its source – the nearby mountain known as La Patilla – the water was blessed. The water fills nine large tanks at the reservoir site, then three pipes distribute the water to all the homes in the community of El Montazo. Those gathered, including those from the local evangelical church, cheered and were sprinkled by the committee members with this life-giving water.

The project was coordinated by a community committee, Proyecto Comunitario de Acueducto de El Montazo, and several members have been trained as plumbers to insure proper maintenance. The aqueduct was funded through a grant donated by the Ruckstuhl Foundation.

Immediately wanting to give thanks to God, all proceeded to the community center across from the chapel to celebrate Sunday Mass. As a remembrance of their Baptism, the Eucharistic liturgy began with another sprinkling of the water over those assembled. To begin this celebration two women from the water committee collected a basin of water from one of the newly installed showers, totally soaking themselves in the process. Upon entering the community celebration the ladies began to bless the community dowsing them with the new water as everyone sang for joy.

At the homily Father Fred Ruse, who has worked with the Dominican communities for a decade, emphasized the significance of water in life. Sister Bernadette “Bernie” Mackay, the Diocese of Orlando’s mission office director, retold the story remembering how the community came together to build their aqueduct. She highlighted the entire community participation including women and children journeying downhill, uphill and across the river carrying pipes on their shoulders to the men who spent many hours digging and burying miles of pipe stretching from the mountain spring to the nine tank reservoir. She told of the joyful excitement of hearing men singing and of joking as they dug the trenches, of the women and children joyfully carrying the pipes all the way to the top and the community, elders mounted on their mules carrying water and the mid-day meals for everyone.

Decorated with posters created by children from the school in El Montazo, the community center came alive as children presented their own poetic writings and shared how this water was already transforming their life. Father Ruse recalled, “One little boy told of how by mid-day, he had already showered three times! No more need to go to the creek to bathe. And along with the mules, the women and children have thankfully ‘lost their jobs’ of making daily trips to the creek, carrying 5-gallon buckets of water on their head for their family’s daily use.”

Sister Mackay noted, “This aqueduct project truly speaks to the heart of mission. From its inception to its completion on June 3, the Orlando mission volunteers and the community of El Montazo worked as a united team witnessing to all that love is a powerful force for good and is an ever present reminder that united in God’s love and guided by the Holy Spirit, each of us is blessed in abundance.”