Muslims and Catholics come together for 800th anniversary of peace talk 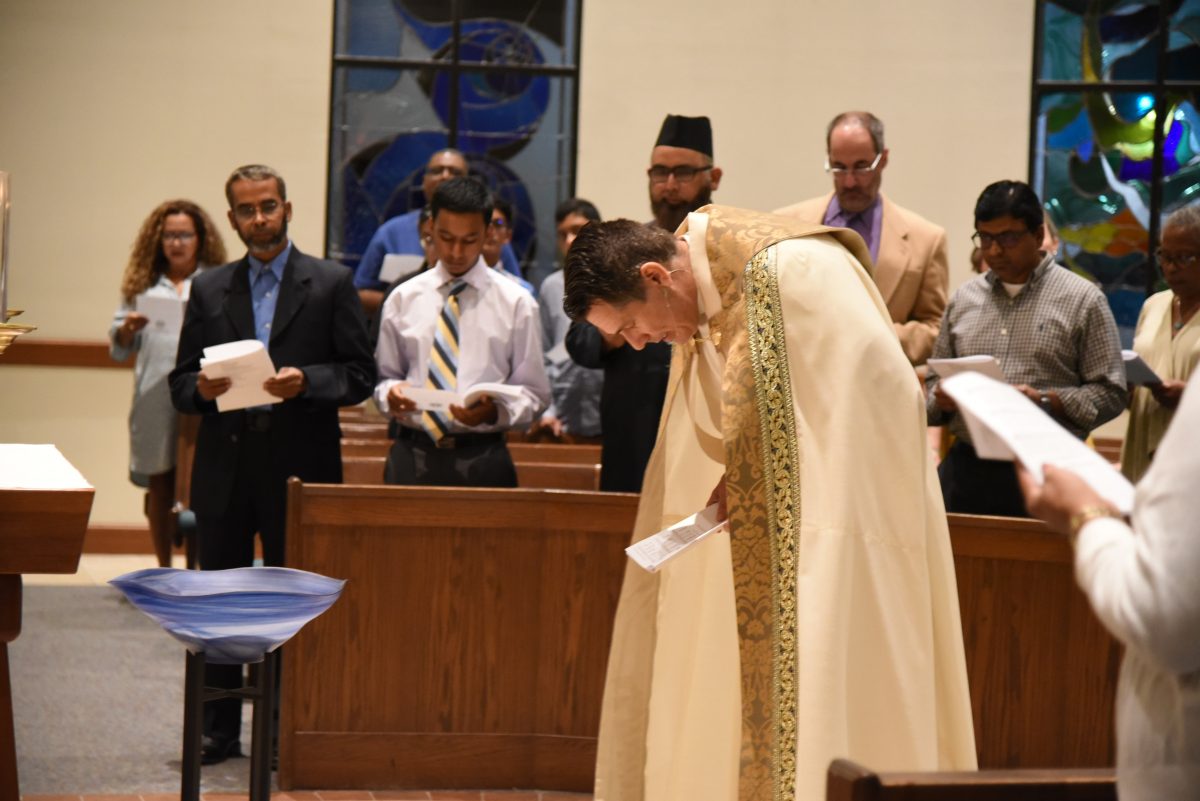 WINTER PARK | St. Francis of Assisi met with the Sultan of Egypt 800 years ago, during the fifth crusade, in the hopes of finding peace among Muslims and Christians. Both learned from one another and many were surprised to discover the compassion with which the Sultan treated Christian captives. Commemorating the event, Sts. Peter and Paul Parish set three nights aside to foster knowledge about the Muslim faith and invite the Islamic Center of Orlando community to Evening Prayer and fellowship.

Franciscan Brother Paul Santoro said, “As a Franciscan, this peacemaking between St. Francis and the Sultan 800 years ago is one of the main events that we celebrate. It is in our constitution that we are supposed to be peacemakers. We are supposed to live among people, Christians and non-Christians alike and respect them as children of God… Isn’t it wonderful that 800 years later, we are still peacemakers in the world as Francis wanted.”

The first evening, Franciscan Father Michael Calabria, director of the Center for Arab and Islamic Studies at St. Bonaventure University in New York, spoke about common misunderstandings and our call as Catholics to respect and embrace others.

He noted, Lumen Gentium, (Ch. 2, p. 16, 126), “But the plan of salvation also includes those who acknowledge the Creator. In the first place amongst these there are the Muslims, who, professing to hold the faith of Abraham, along with us adore the one and merciful God, who on the last day will judge mankind.” For many attending, it was a revelation that Christians, Jews and Muslims believe in the God of Abraham as the one true God.

“I noticed as we put these evenings on, it became very apparent to me that there are a lot of Catholics and Christians that just do not have good and correct information about the Muslim faith,” said Father Derk Schudde, pastor of Sts. Peter and Paul. He counted himself among them. “Because of that, we come in with preconceived notions and they make it very difficult for us to get along and understand each other. Even in this (gathering), there were challenges with some people who were so adamant against the dialogue.” Although there may be disagreement, Father Schudde added, “I believe we can come to understand where we’re coming from and accept each other… and live in peace with one another.”

Parishioner Peggy Studdard said she is happy she came. The movie, The Sultan and the Saint on the second night, helped her understand “you cannot have peace without knowledge. That’s what this was all about.”

Two years after Vatican II, Pope Paul VI released Nostra Aetate on the relations of the Church to non-Christian religions. Father Calabria called attention to Nostra Aetate, 3, “The Church regards with esteem also the Muslims. They adore the one God, living and subsisting in Himself; merciful and all- powerful, the Creator of heaven and earth, (5) … Though they do not acknowledge Jesus as God, they revere Him as a prophet. They also honor Mary, His virgin Mother; at times they even call on her with devotion.”

As a sign of our unity and honor given to Mary, the Christian community and that of the Islamic Center of Orlando celebrated Evening Prayer together the third night. Readings were from both the Qur’an (Ch. 19-Surat Maryam-Mary the mother of Jesus) and the Bible (Lk. 1:26-38), recounting the story of the Annunciation. Then, two young men from the Islamic Center read aloud in Arabic and English the 99 names of God, prayed during the Salah, or daily prayers.

Nadia Afzal was part of the original interfaith program at her mosque seven years ago which began promoting opportunities for encounters with other faiths. “We thought there is a need for every single one of us to get to know one another so that we can bridge the gap of the barrier of misunderstanding that we have.”

Imam Tariq Rasheed of the Islamic Center echoed Afzal’s sentiments. “It is our firm belief that we need to make bridges between communities.” He says he finds people curious to know who Muslims are and he learns from others as well. “This brings people together and breaks barriers. It is the need right now. There is so much hatred against people… hatred will spread if leaders of faith do not come together.”

Convicting us to persevere in these efforts are the encyclicals of Pope Paul VI. “It is charity which guides us to our final end. It is the love of God and the love of one’s neighbor which points out the true disciple of Christ,” Lumen Gentium, (Ch. 5, p. 42, 229). “We cannot truly call on God, the Father of all, if we refuse to treat in a brotherly way any man, created as he is in the image of God. (1 John 4:8)” (Nostra Aetate, p. 5).