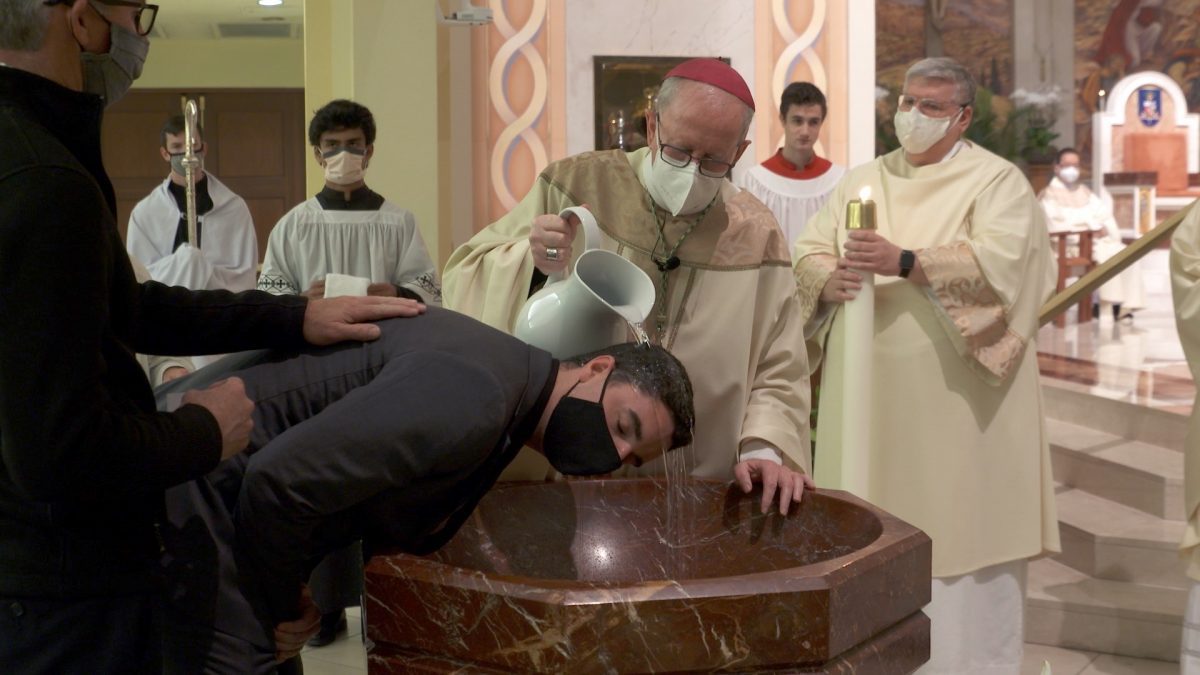 “On the ‘eighth day’, we are born into the family of God by being raised from the dead out of the baptismal waters,” explains Father Matthew hawkins, parochial vicar of St. James Cathedral in Orlando, as he unpacks the Easter Vigil. (GRP STUDIOS)

ORLANDO | It’s Sunday morning Mass. The priest concludes a rousing homily, and then calls a handful of people forward only to share a few words with them before asking them to leave the church. You think to yourself, “Huh, I wonder what they did wrong?” Of course, they didn’t do anything wrong. They are the catechumens/elect participating in an ancient custom of departing the liturgy before the faith is professed (Creed) and the mysteries celebrated (Eucharist).

At a time when an inadvertent leak could lead to governmental persecutions or even executions in the early Church, the uninitiated could not yet be trusted with such sensitive information. Upon receiving the Sacraments at Easter, the truths were then disclosed. This teaching “after the fact” is what the Church calls mystagogy, or teaching about the mysteries (Sacraments) they have already received. In this three-part series, we will unpack some of the mysteries that lie hidden in the Easter Vigil.

The Easter Vigil is unquestionably the climax of the liturgical year. However, what Easter is to the year, Sunday is to the week—a “little Easter”. Properly speaking, Sunday is not the Sabbath, that’s still Friday to Saturday evening. As Christians, we celebrate the Lord’s Day, also called the eighth day (CCC, nn. 349, 1166). You might be familiar with the importance of numbers in the Bible and their significance: 3, 7, 12, 40. Eight is also an important number because…well, it’s one more than seven. If seven is the number of perfection, then eight is one more, it is more perfect.

Most celebrations of the Vigil begin with a reading about the seven days of creation. Each day ends in darkness: the sun sets, the sun rises, the next day. The seventh day was meant to bring creation to perfection, yet it too ends in darkness, not due to the setting of the sun, but the setting in of sin. Death is the darkness that hangs over the world until a new Son rises, not from the horizon but from the grave, to shine on a new creation without ever setting.

Acknowledging the eighth day breaks us out of the endless cycle of a seven-day week filled with work and other responsibilities, and sets us on a tangential path toward eternity. Celebrating Easter for an octave (eight days), reminds us that this day is not confined by a typical 24-hour period. If you attended any of the weekday Masses during the octave, you would have heard the priest referring to “this day” in the preface as if that day is the actual celebration of the Resurrection (because it is).

But the eighth day doesn’t just make creation more perfect, it is a day of new birth for us as well. There was a tradition among the ancient Jews that man was created imperfect. Not that God wasn’t able to make him perfect, rather God wanted him to participate in his own perfection. Part of this perfection included circumcision which was to happen on…you guessed it, the eighth day (Gn 17:12). Circumcision also initiated the son into the family of God, into the covenant. The reason for this happening on the eighth day would only be fully realized in the Resurrection of Christ.

St. Paul translates circumcision in the Old Covenant to Baptism in the New: “In Him also you were circumcised with a circumcision made without hands; and you were buried with Him in Baptism, in which you were also raised with Him” (Col 2:11). On the “eighth day”, we are born into the family of God by being raised from the dead out of the baptismal waters. It is for this reason that many baptismal fonts are in the shape of…right again, octagons. A reminder that it was into a new, more perfect creation that we were born, and under its everlasting Son that we are to live.