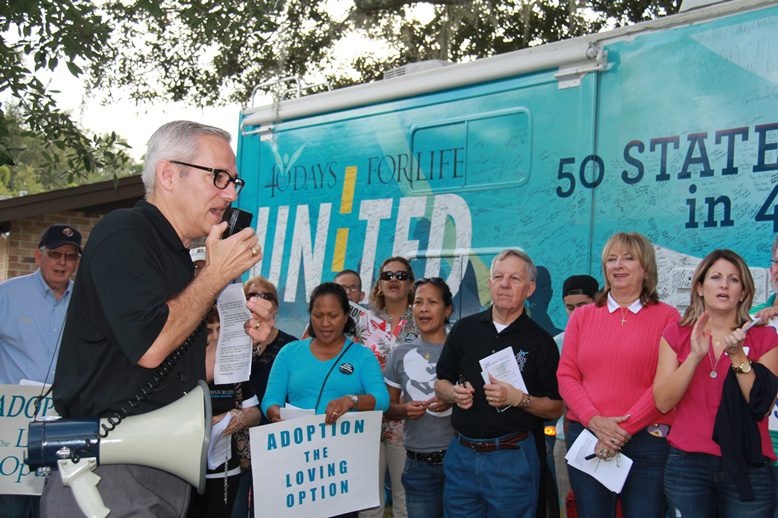 40 Days for Life founder and CEO, David Bereit, makes a stop in Altamonte Springs to “stand shoulder to shoulder” with volunteers and advocates for life while on his 50 states in 40 days UNITED bus tour. (GLENDA MEEKINS | FC)

Almost 100 people stood in prayer in front of the All Women’s Health Center in Altamonte Springs on Nov. 5. It was day 37 of 40 Days for Life, a campaign consisting of 40 days of prayer and fasting, community outreach and constant, peaceful vigil in the public right-of-way outside of abortion facilities, which ran nationwide Sept. 28 to Nov. 6.

But this year, there was something new. The volunteers were awaiting the arrival of the 40 Days for Life UNITED bus on its coast-to-coast tour of 50 states in 40 days, along with 40 Days for Life chief executive officer and founder, David Bereit.

Bereit invigorated his audience with words of gratitude and support. “We have seen record numbers of people turning out. We have seen encouragement and hope,” he said, assuring them, “You are truly a part of the largest pro-life mobilization in history.”

The passionate pro-lifer said the bus was a gift from a volunteer in Indiana who told him, “Use it to save lives.” It was an answer to a prayer. He had been seeking a way to make a significant impact in what he feels is a critical time.

The bus stopped in more than 125 cities to hold rallies and prayer vigils to encourage Christians to stand together for the sanctity of life. Covered with messages of thanks, prayers and well wishes from all over the country, the bus is a visible sign of the united efforts of the pro-life community and a reminder that pro-life advocates are not alone in their labors.

According to Irene Doyle Sandler, Respect Life coordinator at Blessed Trinity Parish, Orlando, at the time of Bereit’s visit there were 367 vigils going on simultaneously covering 50 states and 23 countries.

“Abortion does not take place in the halls of Congress or at the Supreme Court,” she said. “It takes place right in our communities and that is why we pray right here to reach out, to give women hope.”

Then she turned and pointed to the driveway that runs between the abortion clinic and the pregnancy center. She said, “This for profit, free standing abortion clinic, which does abortions up to 24 weeks, six months gestation, which is the legal limit in Florida right now, shares a driveway with Life Choices. So this is literally the front line of the battle between the culture of life and the culture of death.”

It is that very proximity that drove Life Choices to its location. Norma Stives, co-founder and parishioner at St. Mary Magdalen Parish, just down the street, said the group had been trying to move near the abortion clinic for some time, but funds kept them from doing so until this past year. In fact, she was so serious that she promised God to build a chapel in the building if they could secure the location. Her reason: “We know what this is about. This is not a battle against flesh and blood. This is a battle with principalities. So we want to be covered with this shield of prayer.”

It is with this same zeal that Bereit approaches his ministry. In his quick talking manner, he delivered statistics faster than an auctioneer:  “There were more than 72,000 abortions in Florida last year. Since 40 Days for Life began in 2003, more than 700,000 people have participated. The abortion industry is spiraling in decline, faster than ever before. In 1991 there were 2,200 abortion centers across America. Today there are fewer than 650.”

Bereit urged volunteers not to give up reminding them, “We are seeing progress on the front of the sanctity of human life. More people are pro-life in America today than ever before.” He told them that as of that morning, since the crowd had gathered, 575 lives were saved throughout the 367 locations where 40 Days for Life campaigns were held.

Volunteers affirmed that the traffic at All Women’s Health Center had decreased and Life Choices had had several “saves” during the 40 days, including an abortion reversal from a young woman who took the RU86 abortion pill.

In his closing words, he said, “Florida has a huge problem with abortion, but also has some of the most dynamic and active pro-life people in the country. So coming and standing with these heroes, these saints on the sidewalk, is an inspiration to me and to people across the country.”