On the day Haitians annually celebrate their Thanksgiving, Jan. 2, Catholic Haitians in the Diocese of Orlando had a big reason to be thankful – the establishment of their first mission church. 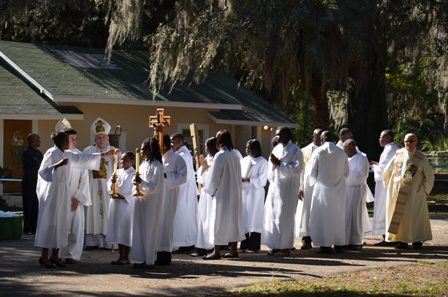 On the day Haitians annually celebrate their Thanksgiving, Jan. 2, Catholic Haitians in the Diocese of Orlando had a big reason to be thankful – the establishment of their first mission church.

The Our Lady of Fatima Mission, set on a five-acre site in northwest Orlando, was blessed by Bishop John Noonan during an outdoor Mass on Jan. 2 and he was joined by Archbishop Thomas Wenski of the Archdiocese of Miami, Haitian priests and over 400 members of the Haitian community.

On Jan. 4, the first Mass was celebrated inside the new church Father Jean Gaeten Boursiquot, Director of Haitian Ministry.

The church, located at 7401 Mott Ave., was originally a home in need of major repairs.  The repairs were made with funds raised over several years by the Haitian community. Those funds went toward a number of renovations, new floors, structural repairs, doors, locks, bathrooms and window frames, as well as the additional new paint and a new air conditioning unit.

“This is the answer to our prayers, but we’re not just going to sit here and be happy that we have a place to worship,” said Marie Delius, a native of Croix-des-Bouquets, Haiti, who has long waited for this new mission.  “We know this is only the beginning. We know that God has answered our prayer; he started with us. We’ve had 40 days of prayer, we’ve had novenas. We are so glad God gave us the privilege, the blessing, to answer the call and serve him.”

Bishop Noonan said the Mission is a “great gift” for a “beautiful people,” who have endured much heartache, most recently from the earthquakes that devastated the country nearly two years ago.

“I have personally worked with the Haitian people when I was in Miami and now here, and they are a beautiful people,” Bishop Noonan said. “They deserve to have a home of their own. It marked a joyful day for us in Orlando, that we can share something with the people of Haiti. They now have their home to worship. It is a great gift, and I hope that they are happy here.”

The Mass featured a ribbon cutting ceremony following the homily, and Archbishop Wenski and Bishop Noonan blessed the church building and the grounds.

Haitians have long had a strong presence in the Diocese of Orlando, with large communities historically at St. James Cathedral and St. Andrew Parish in Orlando, St. Francis of Assisi Parish in Apopka and Resurrection Parish in Winter Garden. Currently, there are 11 parishes in the Diocese that celebrate Mass in French and/or Creole, both official languages of Haiti.

The new church building holds approximately 130 people, and two Masses are expected each Sunday. Delius said she expects more people will be attending those Masses, however.

“Maybe we’ll have people at Mass outside, looking in,” Delius said. “We normally have close to 200 people at church. But it’s not a problem; it’s better to have somewhere to start.”