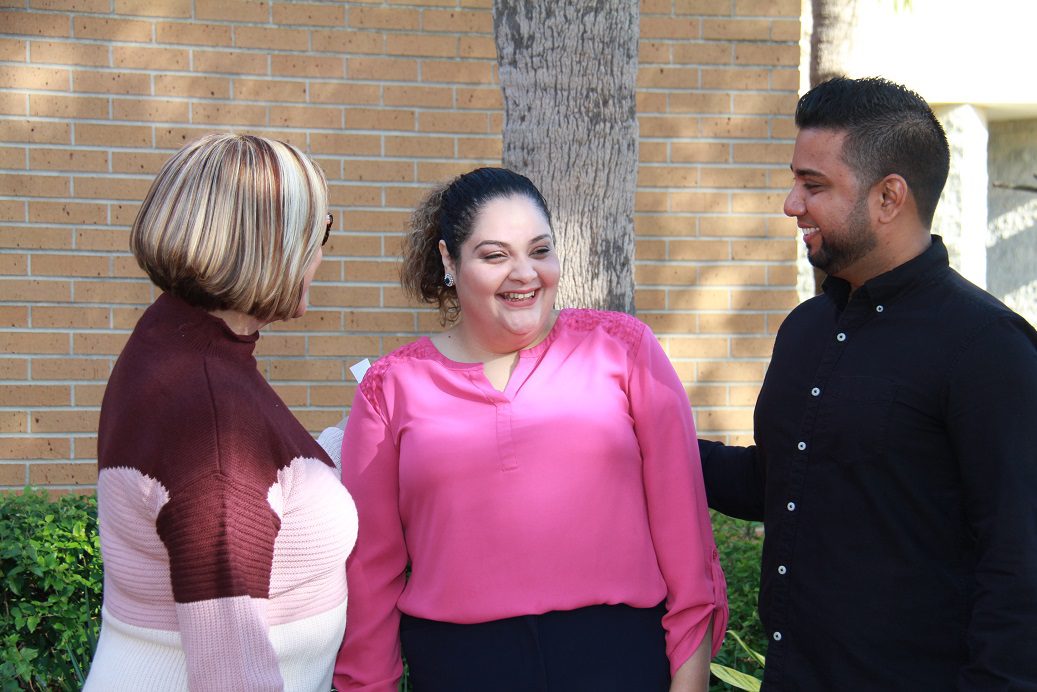 By Glenda Meekins of the Florida Catholic – December 20, 2017

Lizmary López Álvarez, a Puerto Rican evacuee, was recently appointed the new staff attorney at Catholic Charities of Central Florida for Legal Immigration. She welcomes the job in the hopes of paying forward the kindness she received after Hurricanes Irma and Maria.

Arriving in Orlando Sept. 28 with her husband and her mother, Álvarez recalls, “Hurricane Maria devastated the island, but it devastated me too. The doors of my house blew away. They exploded. I spent more than seven hours hidden in a pantry because all the water, wind and debris were entering my house. I lost many of my belongings. It was a hard decision at the time, but the situation was not safe.”

Arriving so soon after Hurricane Maria, the Disaster Relief Center at Orlando International Airport was not open yet. As soon as the center was operational, she went to see what services were available, seeking guidance in her unstable situation. “This time I experienced myself the heartwarming support and dedication of Catholic Charities,” said Álvarez. “It was there that Julio (Rivera) and Rosa (Izarry-Alamo) received me. They hugged me. It’s pretty hard when you come from a disaster. It’s like you’re in post-traumatic stress syndrome. They receive you. They speak to you in Spanish. They talk to you about God and how everything has a purpose. But, they also helped me with the doubts of the moment—where to find a place to live, food. I didn’t have food by that time and they gave me food pantry tickets.”

Although Álvarez was living with her sister, she did not want to be a burden on her family. Álvarez said meeting Rivera and the rest of the Catholic Charities team there made all the difference. “When I approached the table where they were working, I didn’t know it was Catholic Charities because I didn’t have my glasses on,” she recalled. “They saw me crying and they hugged me. Someone mentioned Catholic Charities. It was then that I realized it was the same place my friend was talking to me about.”

Álvarez says she feels all of her experience in law to this point has culminated in this position. Her skills in various areas of law make her uniquely suited for the job—from corporate and criminal cases to family and immigration law. She was trained and registered to practice immigration law to help a client a year prior to her job at Catholic Charities.  Meeting the people in that course as they related their experiences awakened something within her. “I felt I need to be a part of this. With all that was going on in politics and what was developing, I felt it was the way to go,” she said.

All the while she was working with corporate clients out of a desire to help the economy of the island, but felt something was missing. “I felt I had a power in me that I wasn’t using to the fullest,” she said. “When I interviewed with Catholic Charities, I thought, ‘Oh my God, this is it. This is where you wanted me all this time.'”

“It’s a challenging time in immigration, but I am hoping to help the most people possible,” she says referring to her hope to expand offices in the future. She is also eager to go to court. “So many injustices take place in immigration court because people don’t know the language, don’t know how to react or what to say. They don’t have proper legal advice. I know that this is an area where I can make a difference. This is exactly where I want to be—in a place where I can do this for others.”

Catholic Charities of Central Florida Immigration Office has attorneys on staff to assist those in need of immigration services. Should you require services, contact 407-658-1818.