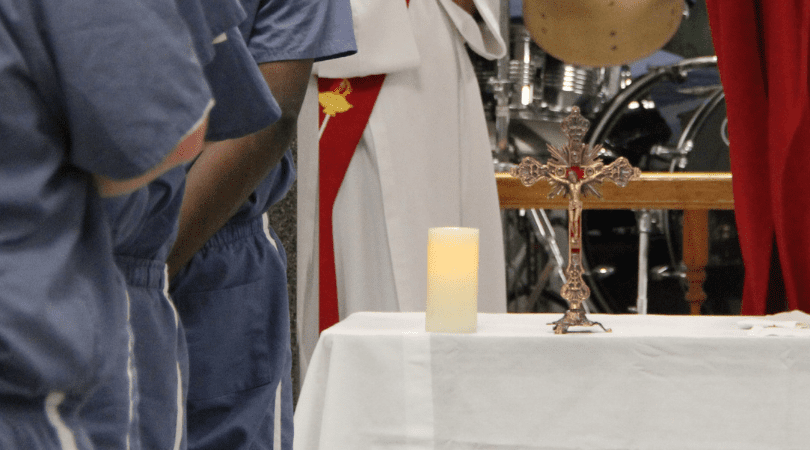 SUMTERVILLE | “…I was in prison, and you came to Me,” Matt 25:36. Lent is a season that draws particular attention to the Corporal Works of Mercy. Yet how many of us get out of our comfort zones and visit the imprisoned?

Every week, priests minister to prisoners in the Federal Correctional Complex (FCC) Coleman in Sumterville, accepting the invitation to be their brother’s keeper, to meet Jesus in the hearts of the wayward and give them hope. With the recent addition of another Catholic Mass in Spanish, which began March 27, more inmates will be nourished by the Body of Christ, helping to restore, heal and reconcile them with God, others and themselves.

FCC Coleman is about 40 miles south of Ocala and the largest federal correctional facility in the United States. More than 6,800 inmates identify with approximately 27 religions. Federal Bureau of Prisons policy states accommodations will be made for all religions and that authorized services will be available for all inmates weekly. The difficulty is in finding those able to serve.

Father Richard Zuk was appointed in 2017 by the Diocese of Brooklyn to serve this facility as one of 9 chaplains of different faith backgrounds. He works with Father Vitalis Ozokpor, the other Catholic chaplain, and Father Gianni Agostinelli of the Diocese of Orlando, “to help proclaim the Good News to the captives” (Lk 4:18). Responding to a hunger for the Gospel and a deeper relationship of our loving God, Bishop John Noonan approved the transfer of the Sunday Celebration of Eucharist to be on Wednesday evenings in Spanish at the women’s minimum-security facility because of the growing need. More than 50 inmates now participate in celebration of each Mass.

“As Pope Francis said, the peripheries is where the Gospel needs to be heard,” noted Bishop Noonan. He recalled years prior when he served in prison ministry in South Florida and one man in particular came to mind. The inmate was in prison for murder and told, then Father Noonan, “In my life I have found God and I have found peace. But we put people to death and sometimes we deny them the opportunity to find the grace of God in their lives.”

It is this very grace that Father Zuk and his fellow clergy hope to share— providing a space for an encounter with the Risen Christ by increasing celebrations of Mass. “The Church, the prison and the chaplains are seeking to meet the needs of the inmates,” said Father Zuk with the hope of getting more Spanish-speaking priests, deacons and lay-people involved. He added, “With so many responsibilities placed upon my brother priests, their time is very limited. It would be a grace if we could have a group of priests where one priest celebrates one Mass in Spanish for the women once every-other-month.”

Father Gianni Agostinelli of San Pedro Jesus Maldonado Catholic Mission in Leesburg has been celebrating Mass at FCC Coleman for 13 years. “I’ve served Mass there for such a long time that many of them are considered friends. To me, it is the best Mass to celebrate, honestly,” he said. “Most are in for minor crimes,” he noted.

He recalled, “Two months ago, one of the inmates who regularly comes to Mass was being released from prison. We all blessed her with our hands over her. It was very powerful. She was crying of course. She said, ‘I’m happy that I’m going, but also very sad. I didn’t go to Mass before I came here. I wouldn’t go to Jesus. And when I came here, Jesus was here waiting for me. When I go home, we will keep going to church, but I will not be able to go to church with my sisters, this community at FCC.’ To me it showed how much the Mass means to them in that context.”

Father Agostinelli has celebrated Mass in Spanish for the women for almost a year. “The Mass is important. I stay for Confessions and sometimes counseling,” he said. “The music is very good. They even have a choir that sings a capella in purple robes. It is very well organized. Especially among the women, you see they’re really sisters. They are really community. It’s easy to connect with them. It’s a beautiful experience really.”

He added, “It is important to provide the basics. This is a right, to practice your religion in a language you understand,” he said. “It’s like a seminary here. The only difference is the door is locked.”

Moving the once-a-month Mass in Spanish from Thursday to Wednesday opens up the opportunity to worship in their native language. The need for additional Masses in Spanish is great. During the upcoming Triduum alone, Father Zuk will preside at 10 liturgies for the faithful, six of which will be bilingual.

As Bishop Noonan stated, “It (prison) is a place where some people do find God.” He often told prisoners, “If you come into prison as a broken person, as an angry person, with all the faults and failures you have, but you can leave prison as a better person and have found God, then you have accomplished something in your life.”

It is his hope that with more priests, Mass times and opportunities to receive the Sacraments, these inmates will find strength in God and grow in His goodness. The bishop noted that we all have good and evil within us. The difference is in which one we feed.

In the words of a prisoner to whom Father Agostinelli asked, “What are you doing here?”— may all prisoners respond as this one, “I am learning to be free.”

By Glenda Meekins of the Florida Catholic – April 8, 2019