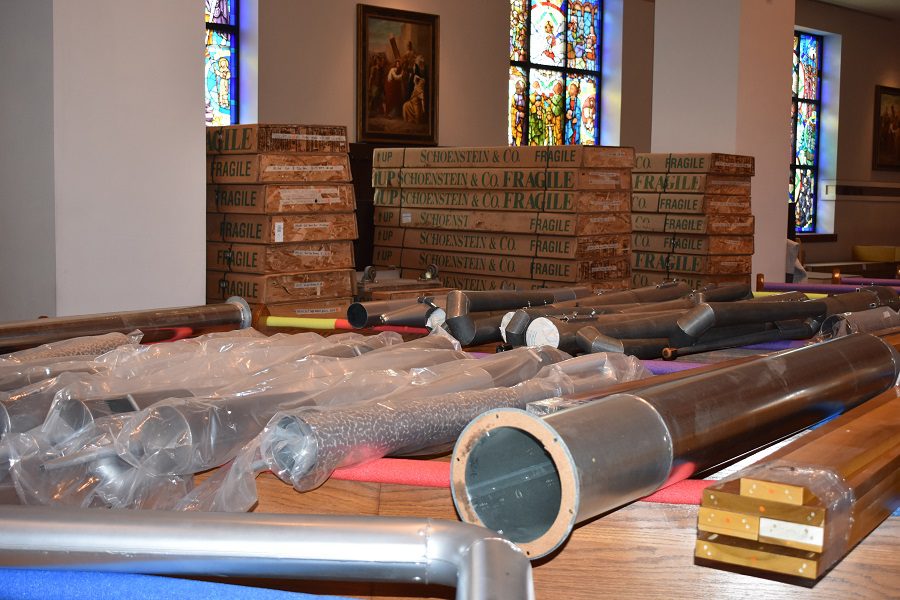 The first of seven shipments for the new Schoenstein & Co. pipe organ arrived at the Basilica of the National Shrine of Mary, Queen of the Universe June 3. The completed organ will feature 5,200 pipes and will debut in late October. (GLENDA MEEKINS)

ORLANDO | The first of seven shipments totaling 5,200 pipes arrived at the Basilica of the National Shrine of Mary, Queen of the Universe June 3 at 6 a.m. The pipes will form the new Schoenstein & Co. organ, a long-time dream of founding pastor of the shrine, Monsignor Joseph Harte.

“An organ is the official instrument of the Church,” explained Monsignor Harte. “The reason for the organ is to help the piety of the people. The sound is so different. It can be so sweet and beautiful. It helps elevate people’s minds and hearts to God.”

The shrine’s music director, William Picher, explained the first shipment was primarily made up of diapason pipes “that make the principal sound of a pipe organ.” They will go in the gallery, along the back wall of the church, above the entrance doors coming in from the narthex. “This will be the foundation of the organ,” he said.

The organ will be installed as each section arrives. The tallest pipes, reaching 37 feet high and 18 inches wide, will be located in the front of the basilica on either side of the tabernacle. All the pieces should arrive by August, then tuning begins—a process that takes an estimated three months. The tonal work includes the “adjusting of each of those 5,200 pipes for loudness, softness, and the speech to make sure it is speaking promptly and perfectly. Then it’s matched to this room,” said Schoenstein & Co. vice-president, Louis Patterson, who is heading up the project. He brings with him a crew of specialized craftsmen to ensure success.

Patterson noted, “With such a large organ, there will be a wide variety of sounds. One unique feature is that the back organ, which we call a string organ, will feature violins, celestes and sounds like that. It will make a nice heavenly sound from the back of the room.”

Monsignor Harte looks forward to seeing the dream to completion. “It seemed to me that the Shrine would be remiss if it didn’t possess an organ to help people be elevated more to the Lord and to the things of heaven,” he said. Basilica guests will be able to hear those sounds of heaven on earth this fall.