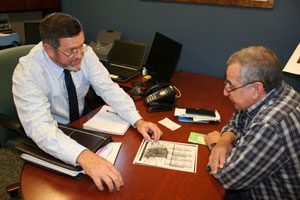 The new leader of the Diocese of Orlando’s Ministry of the Incarcerated is focused on bringing the Catholic faith into jails and prisons around the diocese and having ministers involved in all aspects of prison ministry, including visiting facilities, supporting families, developing re-entry programs and making connections.

Deacon David Gray (pictured on left), who also serves as the director of the Permanent Deaconate, was named to head the Ministry of the Incarcerated in June and said he will be building on an already strong ministry while incorporating ideas of his own and those of approximately 180 volunteers, including priests, from around the diocese.

“We’re bringing the Catholic presence, not because they’re Catholic but because we’re Catholic,” Gray said. “We want to share the Christian faith from a Catholic perspective. It’s a challenging ministry, but it’s also a very rewarding ministry.”

Gray is creating plans, making connections within the parishes and facilities and developing a long-term vision. One of his plans includes forming 21 communities within the diocese’s six deaneries that would be developed by different parishes. These pockets, Gray said, would lead the incarcerated in Communion services and bible studies, provide materials to aid prayer life and give encouragement to the inmates, regardless of religion.

Ministers receive training, participate in days of reflection and share their best practices to help and support each other before they visit an institution or center. Leaders of different groups, such as separate men’s and women’s groups, coordinate meetings where they can share ideas and thoughts with each other.

Once at the jails and prisons, ministers give out bibles, rosaries and prayer cards and lead bible studies. Priests can have one-on-one meetings with inmates; ministers cannot. However, in a group setting, they are allowed to have discussions.

But not all of the ministering is done inside the jails or prisons, Gray said; that is only one of three aspects. The other two are supporting and comforting the incarcerated person’s families and developing a re-entry program, which would help former inmates integrate back into society when they are released. The Saint Vincent de Paul Society is already assisting many former inmates.

One of the longtime prison ministers within the diocese is Susan Gilmour of St. John Vianney Parish in Orlando. Gilmour is the women’s leader for the ministry at the Orange County 33rd St. Jail. Each Sunday, her group leads reflections and prayers, while some of the inmates read the weekly passages.

“It is just a wonderful and beautiful ministry,” said Gilmour, who has been involved in the ministry for about five years. “I feel like I am leaving with so much more than when I arrive. The inmates can’t come to us, and they are in such great need. They are searching for God. To have the ability to go in and work with them, teach and learn from them, is such an experience.”

Among the challenges for prison ministry is entry into facilities. Currently, ministers have access to only 20 of the 30 facilities located the Diocese of Orlando. Additionally, it can sometimes take a year for individual ministers to have access to individual facilities, dependent upon a variety of things. Two ministers are required for each visit, so scheduling visits can also be an issue.

The challenges, however, are overcome by the rewards. Spencer Silvers of Holy Family Parish in Orlando leads the men’s group at Orange County 33rd St. Jail; he has been involved in the ministry for three-and-a-half years.

“You feel the presence of the Spirit; it hits you right in the face,” Silvers said. “You get addicted to it. You’re helping others, you pray with them. When you leave them, they have light in their face. They have peace.”